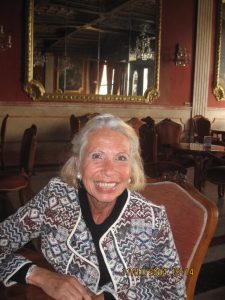 I love the interaction in our Facebook Writers On Spain Group, and I get on so well with my fellow writers in there, I often wish some of them lived closer to me, so we could meet up for real. So when I found out that relatively new member Inka Piegsa-quischotte was based just 10 miles away in Torrevieja, I was delighted.

Inka didn’t have transport, and in any case, she didn’t have a clue where Algorfa was. Most people don’t until they arrive here, and then they wish they’d known about it before. So we scheduled a meeting in the Casino in Torrevieja. In my six years in Spain, I’d never been to the Casino, so I was blown away when I entered the beautiful salon, to be greeted by Inka’s beaming smile.

Being a blogger, I never pass up the chance of new material, and Inka kindly agreed to be interviewed for my Writers On Spain series. Once we’d got the gossip and the laughter out of the way – don’t know the last time I had so much fun without intimate body contact – I settled down to find out more about this very glamorous granny, who looks anything but granny-like.

Born in Berlin, Germany, Inka has travelled so much since her teens she doesn’t consider any country is exclusively home. She describes herself as a ‘Born nomad,’ and home is wherever she is now. By that yardstick, Inka has had more homes than most. She’s lived and worked in Turkey, Miami, Beirut, Oman, Spain and London.

Until recently, Inka was a lawyer with her own law firm. After studying law in Switzerland, she obtained law degrees in Germany, London and Granada, Spain. She spent 15 years in Marbella during the 1990s, practicing law there and also in London.
Travel has always been Inka’s main love though. After obtaining her first degree, she took a year out to travel Africa with her then boyfriend. It wasn’t very glamorous, and when they returned, the boyfriend vowed he never wanted to travel again. Inka, though, was well and truly bitten by the travel bug.

She’s not your typical foreign tourist either – she loves to immerse herself in the language and culture of her favourite places, and she has a particular affinity with Arabs. She told me she speaks four and a quarter languages, and I wondered how that worked.

‘Well, I’m pretty fluent in English, German, French and Spanish, but the Turkish is a work in progress!’

Inka’s last ‘home’ before landing in Torrevieja a year ago was Turkey, with winters spent in Miami. And Turkey is responsible for getting Inka into writing. Around five years ago, Inka was strolling with a friend along the waterfront in Kusadasi, and she met two American women in a state of panic. They were passengers from a cruise ship, and while they had answered a call of nature, they’d misplaced their husbands. Such was their distraction, they couldn’t see the cruise ship that was towering over them, and asked Inka and her friend to direct them to it!

‘They were typical helpless travellers, lost without their men, and I wanted to do something about it. I couldn’t believe anybody could be so useless they couldn’t find a ship on a waterfront – and it was the only one in the port!’

Once she got over her disbelief, Inka made it her mission to tell people to ‘Get off their backsides and see the world,’ and she does it beautifully through her Glamour Granny Travels blog. The blogs are witty, entertaining and informative in equal measure, because Inka doesn’t do Regurgitated Guide Book stuff. She’s been there, done it and got the t-shirt – even though the t-shirt is likely to be a designer one rather than one with ‘I Love Benidorm’ across the front!

If you’re looking for backpacking, roughing-it travel guides, Inka’s blog is probably not what you’re after, but although Inka is a Glamour Granny, she writes about places that are within almost everybody’s budget, as well as giving insights into the luxury resorts. So the blog is for anybody who loves to travel, as long as they travel with more than a rolled up one man tent and a spare pair of knickers.

So, are Inka’s travels over? Has the Glamour Granny finally settled down? Sadly for me – for I really got to know and like Inka during our meeting – the answer is a definite No.

‘Torrevieja is home for now, but I haven’t finished travelling yet. It may be a cliché, but I really am a true citizen of the world.’
She’s also an excellent Writer On Spain – and other countries – so check out Inka’s blog and travel guides soon. Who knows, maybe one day she’ll be your neighbour – she hasn’t yet decided where her next ‘home’ will be!

2 Responses to Writers On Spain: Inka Piegsa-quischotte – The globe-trotting Glamour Granny from Germany!