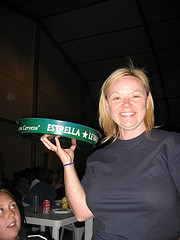 Debs, doing what she does best – providing hospitality

How to begin to describe my latest Writer On Spain, Debs Jenkins? The title of the post only scratches the surface, because Debs has done so much in her 44 years, I should probably be doing a biography here.

Born and raised in Birmingham, Debs always knew she wanted to be a writer, but her Career Advisor at school said she needed to train for a proper job. The teenage Debs was only interested in writing and boys, so she decided to become an electronics engineer after studying for a degree at Birmingham University. As Debs freely admits, she only did it to meet men – and it worked!

‘I met my two husbands through electronics, so it served a purpose. I got made redundant after a few years, which was probably just as well, as I’m not in the market for Husband Number Three!’

After being made redundant, Debs took any work she could find, but didn’t really enjoy it, so she set up a marketing company at the grand old age of 24. It was a home based start-up, but within a year or so, it was a big concern with several staff. And this was when Debs really got her teeth into the writing, and along with her brother she co- wrote ‘The best-ever book on marketing in the world.’

It might well have been the best in its niche, but nobody wanted to publish it. Not to be deterred, Debs and her brother set up their own publishing company, and published it themselves. At the time, it wasn’t easy to self publish, but Debs is a ‘Can Do’ person, and she did it. Again, the business went from strength to strength, and when Debs moved to Spain in 2005, her brother came with her and they ran the publishing business from La Murta in Murcia. However, after a year, her brother decided Spain wasn’t for him, so he returned to England and took over the running of the publishing company.

When we looked at properties in Spain, the apartment that’s now our home was the first place we saw, but Debs’ finca at La Murta in the Sierra del Carrascoy was the last place she viewed. Debs and her husband Marcus had almost given up hope of finding their dream home in Spain, but when she arrived in La Murta, she knew she was home. La Murta is a small village with a population of just over 100, and the Jenkins family are the only Brits there.

So, did the villagers take them to their hearts? Absolutely! Even though the children who have learned English from Debs are now talking with a broad Brummie accent!

In fact, living in La Murta is directly responsible for Debs’ two Spanish cookery books. The first one, Spanish Cooking Uncovered: Farmhouse Favourites has a fascinating back story. A Spanish friend showed Debs 2,600 hand written recipes he’d discovered in his finca, and asked if anything could be done with them. The recipes belonged to his grandmother Maria Luisa, and they dated back to the time of the Spanish Civil War. The book features more than 80 recipes, accompanied by stunning photos.

Debs is justly proud of this book, but her favourite is a book that came to life as a village fundraising initiative. La Murta may be small, but like all Spanish villages and towns, the fiesta is its life blood. Debs and her husband are honoured to have been chosen to serve on the fiesta committee on more than one occasion, and in 2013, they had the idea of producing a cookery book to raise funds for fiestas.

Debs asked in the local panaderia (bakery – of which there are three in La Murta) if anyone would be interested in contributing recipes to the book. The answer was a resounding ‘Si,’ and within two weeks, 40 local chefs had cooked over 150 recipes. Debs had the arduous task of photographing – and tasting – every single one. She remembers the experience well:

‘I love my food, and I loved the research for the book, but I put on a pile of weight. The Mediterranean Diet is a healthy one – but not when you’re eating on the scale I was. I mean, I had to try all the recipes, didn’t I?’

The book – Spanish Village Cooking – Recetas Del Campo – raised €2,000 for the 2014 fiesta, and has already raised around the same amount towards the 2015 celebrations. It’s written in both Spanish and English, and it’s clearly very close to Debs’ heart. Although she has written a number of books, including the best-selling Going Native In Murcia, she’s loving her role as a cookery ambassador for La Murta, and there are more cookery and travel books in the pipeline.

I was born within about 10 miles of Debs, in Walsall, West Midlands, and I discovered a real affinity with this warm hearted, generous Midlander who has slotted so seamlessly into life in a Spanish pueblo. She truly is one of the great Writers On Spain.