Why I can’t live healthily in England 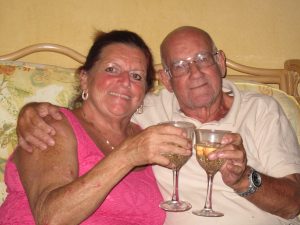 Tony and I – healthier, happier and better off in Spain!

It beats me how people can say they’re going back to the UK because prices have gone up in Spain and they can’t afford to live here any more. What planet are these people on? We’ve just come home after two months in England, and we’re short on cash and a bit short on temper, because life has been very different to what we’re used to.

For a start, we’ve hardly been out for a meal in two months. Not that we eat out all that often in Spain – maybe once every week or 10 days, and the odd snack – but it’s just way too expensive in England. Tony’s favourite snack lunch, Cornish Pasty, is up over £3 now in England, and there’s so much pastry it’s repeating on you all day. Yesterday, my friend and I had  chicken and prawn sandwiches with salad, and paid just over €3 each for the privilege of enjoying a healthy, filling lunch to keep us going.

Most of the tapas on offer come out at around €2 each, and for that you can get magra – lean pork in a delicious sauce – Russian Salad, seafood, chicken wings, and all manner of delicious, nutritious food. Two tapas with bread comes out at the same price as a Cornish Pasty, but without the indigestion!

As for eating out, last week we went to our favourite Chinese restaurant, and enjoyed three courses each and a bottle of wine for just €15. The wine with the meal costs more than that in England, and you’d have a job to get one 3 course meal, let alone two, for €15 (around £11).

People say groceries are cheaper in the UK, and they are, if you want to eat stuff like pies and ready meals, but if you’re looking for healthy ingredients for a home cooked meal, you’ll be digging a lot deeper into your pocket. Free range eggs are about half the price in Spain that they are in the UK. I pay €1.35 for a dozen large eggs, and you can’t even get 6 medium for the equivalent price in the UK.

Another one of the ‘cheap things’ in the UK is sausages, and unless you pay the equivalent price of a small joint of meat, you’re not going to get decent sausages – they’ll be full of cheap fillers such as suet and breadcrumbs, and it will come through in the taste. Plus you’ll have a pool of grease left in the bottom of the pan, or the barbecue will be up in flames from all the dripping fat. When I cook fresh Spanish sausages, I need a little oil to stop them from sticking to the pan or the barbecue griddle. That tells me there’s more meat than fillers in my sausages, and the taste confirms it.

Okay, you can get cheap fruit and vegetables from the supermarkets in the UK these days, particularly Aldi and Lidl, but the problem with most of them is that they’re harvested before they’re fully ripe and shipped around the world in cold storage. Here in Spain, produce is picked and sold when it’s ready to eat, so you’re getting the full hit of vitamins, nutrients and flavour. I can honestly say the only vegetable I really enjoyed back in England was Savoy Cabbage – everything else was disappointing. Except for the strawberries and raspberries that is. Nowhere does those quite like England!

I’m not a big fan of lettuce, but I do enjoy a Cogolla – it’s okay, it’s not a new kink I’ve developed, it’s what Little Gems are called here! And at 4 for €1 on the market, they’re a real bargain, but the poor specimens I managed to get in England had obviously had a flavour bypass – they tasted of nothing at all.

Like many people of our generation, Tony and I moved out to Spain to have a healthier lifestyle, and to make our money go further. The area around the salt lakes of Torrevieja is the healthiest in the world for people with joint problems and breathing issues, and we tick both those boxes between us. When we were in the UK, I was popping painkillers for pastime, and Tony spent so much time at the doctor’s he was worried they’d charge him rent! In almost 8 years in Spain, he’s never needed to test out the Spanish health service, and that’s pretty impressive for an 81 year old.

The truth is, the climate here is healthier, and it’s cheaper to eat well, whether you eat out or cook at home. And because of the warmer weather, you don’t tend to eat so much, and you go for lighter foods like salads, rather than loading up on bread and potatoes. Most importantly, we both enjoy much better health here. It’s not just about Pounds versus Euros, it’s about quality of life, and for us the quality of life is so much better here. Cheaper and better in the UK? You cannot be serious!

27 Responses to Why I can’t live healthily in England