When Writers On Spain get together, the result is Tails of the Alpujarras! 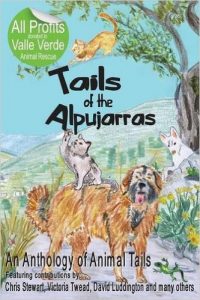 Tails of the Alpujarras, with cover artwork by Charlotte Moore

One thing I love about being a Writer On Spain is that I meet and mix with so many many talented writers who are genuinely nice people too. In our Facebook Group, we have a lot of fun, but we also pass on helpful tips, share each other’s work to spread the love, and occasionally, we collaborate on a project. So when David Luddington asked for our help in writing an anthology to raise funds for Valle Verde Animal Rescue on the Costa Tropical, in Southern Spain, several of us signed up.

Like Writers On Spain, Valle Verde started out on Facebook, when Freya offered to foster a dog rescued by Linda. Now, the centre has been going for just over a year, during which time more than 200 animals have been rescued, treated and rehomed. The  centre receives no government aid and survives purely on public donations. The idea for the book came from David, who writes comedy fiction, and his publishers, Mirador Publishing, agreed to sponsor it.

Now – in the summer of 2015 – the book is in the shops, on Amazon, and available for download. There are 35 stories in all, and all have an animal at the heart of the tale – or maybe that should be tail? It’s a surprising and satisfying mix, with fiction, true life stories to melt and break your heart in equal measure, and even a few poems. There’s a mix of bestselling writers, published authors, bloggers and just people with a passion for animals who can write and want to help.

Chris Stewart, of Driving Over Lemons fame kicks of the proceedings with The Near Death of Bumble, a funny-but-almost-tragic tale of a dog who braved a raging river rather than be parted from his humans for even a few minutes. It’s a sort of doggy version of the old song Running Bear, and it resonated with me, because I could imagine Paddy doing that too. I can’t even go to the loo without him, so he couldn’t bear for us to be separated by water. Then it’s the turn of Costa Blanca radio station owner, writer and patron of Samaritans in Spain Dave Bull. He’s made several contributions to the book, and it seems his dogs are just as mad as he is.

One person who knows all about rescue animals in Spain and the work that goes into it behind the scenes is Jane Walters. While living in Northern Spain, she volunteered to help at an animal shelter. In between shovelling – well, you know what – and cleaning kennels, she gradually fell in love with Buddy, a big, black, hairy hound who went home with her at the end of her volunteer stint. He accompanied her back to England when she left Spain, and is about to come back home when Jane moves to the Costa Blanca soon. It’s a heartwarming story, told from two points of view.

Saxon, by David Luddington, is a doggy reincarnation tale, and  It’s a Dog’s Life by Fran Scott is a real tearjerker, although both stories are timely reminders that dogs, like us, have feelings and crossing the Rainbow Bridge isn’t the end, but a new beginning. Quirky Medium Alison Wynn-Ryder makes that clear in her contribution. Sarah Luddington makes a typical off-the-wall contribution with Dog’s Angel, the story of how a supposedly dangerous dog brought two lovers together against the odds. The book is full of such gems, and it’s a real treat for all animal lovers, as well as people who appreciate good writing. There’s one from Yours Truly too, about when Paddy came home.

I’m proud to be part of such an excellent collaboration to help the animals who find their way to Valle Verde. You can help these deserving creatures, and help Linda and Freya to continue with their inspiring work, by buying and reviewing Tails of the Alpujarras. Why not start your Christmas shopping early and buy the book for an animal-loving friend?

4 Responses to When Writers On Spain get together, the result is Tails of the Alpujarras!