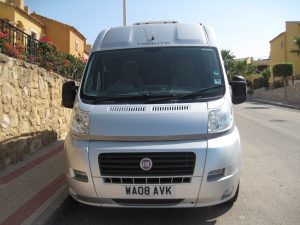 What’s wrong with Portugal? Nothing at all – in fact every single friend of ours who has ever been there has told us we really must go, because we’ll love it. And it’s not so far away, whether we go from our home on the Costa Blanca or take it in on the way back from visiting the family in England. It’s on our bucket list – along with Greece and Cyprus – so what’s holding us back? Well, fate is, to be honest.

Our first attempt at Portugal was in May 2013. We went to England for my niece’s wedding, and we were going to go home via Portugal. So far so good – until my daughter decided to have a brain stem stroke which kept us in England until August. Well, to be fair, I don’t think she actually decided to do it, but it happened, and the Portugal trip was cancelled. Luckily she made a pretty much perfect recovery, so we decided to re-book the trip for July 2014.

In March 2014, on St Patrick’s Day, Paddy came into our lives. He was a 6 week old rescue puppy with separation anxiety issues, and we didn’t think he’d cope with 24 hours in the kennels on the Pont Aven, as we sailed back from the annual visit to England. So, we cancelled the trip again, and travelled via Eurotunnel, so Paddy could stay with us all the time.

When we planned the 2015 England trip, we also planned the Portugal detour, but two things happened to stymie our plans. Tony’s passport expired, and we had problems getting it delivered, so I hopped over to England to collect it in person, so that our UK visit and Portugal trip could go ahead. Unfortunately, on a rainy day in Daventry, I slipped on a step and strained my intercostal muscles. And no, I hadn’t been drinking – it was 10.00 am – hours ahead of Vodka O’Clock. However, I couldn’t drive any distance for some time, so the Portugal trip was cancelled yet again.

I finally felt well enough for the drive to England about two weeks ago, so we decided to return via Santander and do Portugal on the way home. Once again, the gods conspired against us. By now, Paddy was over his separation anxiety and happily stayed in the kennels for the crossing to the UK. We were so pleased, we were actually looking forward to the return crossing, but alas, it was not to be. There were no kennels available until early October, and we needed to get back in September so we could help our friend Jane with her move to Spain. Besides, our upstairs neighbour Carl was doing the plant watering and fish feeding detail, so we could hardly say ‘By the way, we’ve extended the trip by a month, go and buy another carton of fish food.’

Well, I suppose we could have, but we’re not made like that. So, once again, the Portugal trip was off. We will sail into Roscoff and drive down through France and Spain, so the drive into Portugal is just a tad too far – especially as the intercostal muscles are still not fighting fit.

We’d just about resigned ourselves to crossing Portugal off the bucket list – status can’t bloody manage it – when today we had a phone call from our fellow motor caravanner and friend, Glenys. The Motorcaravanners’ Club are doing a holiday rally to Portugal in March 2016. It may be cold and windy at that time of year, down there in Lagos in the Algarve – I thought Lagos was in Nigeria, or is there another one – but at least we’ll get there. Hopefully. And if we don’t, maybe we need to accept that we’re not meant to go there. It will be the fifth time of asking, after all. But for now, at least, we’re Dreaming Portugal.