A week of mixed fortunes for Paddy! 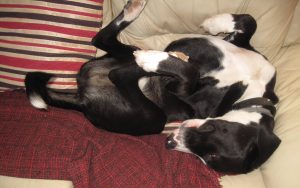 It’s been an eventful week for Paddy. Now he’s catching up on some rest

As another week draws to a close – how they fly as you get older, or is it just because I’m enjoying life? – there are, as usual, a couple of Paddy-centric incidents that merit sharing. well, three actually. Unfortunately, there are no pictures of any of them, but I’ll do my best to paint a picture with words for you.

Last Friday, my friend Joan and I were enjoying a trawl of the clothes shops and spending a few Euros. When we got back to Piddock Place, and I’d given Paddy his share of cuddles, Tony said, ‘Paddy has a present for you outside.’ Since Paddy doesn’t have any pocket money, and even if he did, it would be stopped most weeks for misdemeanours of one kind or another, I wasn’t exactly looking forward to my present. My instinct was right, because there, on the terrace table was a black rat. Like Monty Python’s parrot, it was extinct, it had ceased to be, it was an ex rat. It was very dead, and Paddy was the murderer.

A couple of days before, Tony had seen a rat in the under build, but he couldn’t risk putting poison down. Although we could put it out of Paddy’s reach, if he’d caught a poisoned rat, he too could have been extinct. Clearly it was a very considerate rat, because it only decided to come out to play while I was out. It was so friendly, it climbed on Tony’s foot and was about to run up his trouser leg when Paddy spotted it. Maybe he thought the rat was going to hump Tony and he didn’t fancy the resulting offspring, or perhaps he thought Daddy was about to be done to death and he’d lose the main source of treats. Either way, he grabbed the rat, and ran off with it. First of all he smashed it on the gravel, then he threw it up in the air a few times, catching it expertly as it descended. Happy that the threat to Daddy’s life and health and Paddy’s treats was eliminated, he ran off to play and left Daddy to deal with the fallout.

Of course, I was proud of my brave boy, but I was also worried that he might have got something nasty from the rat. I really shouldn’t have Googled ‘Are rats dangerous to dogs?’ before I called our lovely vet Madeleine, because I couldn’t see him lasting the day. As I prefer my dogs living and running around  rather than gaining posthumous awards for bravery, I asked if I should bring him straight round, but she said as he hadn’t been bitten by the rat or eaten it after the kill, he’d be fine. She did suggest we wormed him though, just in case it had passed any parasites on.

So we breathed easy, and on Sunday I sat watching the Remembrance Sunday service from the Cenotaph. Although I was in my dressing gown still, I stood for the two minutes’ silence and Paddy, bless him, stood alongside me, just as immobile as I was, apart from giving me the occasional sideways look as if to say ‘When does this new game get interesting, Mummy?’

It got interesting just as they played the Last Post and the camera panned across the crowds. Call me psychic, but as the black busby of a Grenadier Guard – or whatever Guard it was – came into view in the bottom right hand corner of the screen, I had a feeling of impending doom. The top corner of the busby looked suspiciously like a cat to me, and if I thought that, so would Paddy. My worst fears were realised as he launched himself at the TV, hackles raised. Disaster was averted by two lucky chances. The coffee table absorbed most of the impact of 32 kilos of flying pooch, and as the TV was anchored to the wall, it stayed vertical. Just. Howver, the rigid bar holding it to the wall got bent a bit.

Fast forward to Tuesday, and once again cat is on the menu. Paddy’s last walk at night is to a small patch of waste ground just down the road 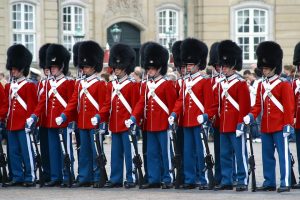 Okay, they don’t look much like cats here, but when you’re a cat-obssessed dog, and all you can see is the rounded edge in the corner of the TV screen …

from us. He loves going there, because it’s part of a disused quarry, and he can do his Wall of Death run around it to get rid of the last of his energy before bed. As a bonus, there are usually a few rabbits to chase, although thankfully his rabbit catching skills are way behind the rat catching success rate. Once he’s finished, he comes back to me and sits on the pavement for me to put his lead back on for the walk home.

He was sitting there as good as gold, when he looked to the right and saw a big white ball half way up the street. No, it wasn’t the Super Moon come to Earth, it was a big fluffy cat, sitting looking at Paddy. Neither of them remained seated for long, and at some point, the cat must have squared up to Paddy. Although there was no sound and no blood, when I called Paddy back he had a mouth full of white fur. I tried to find the cat to give it back once I’d taken Paddy home, but understandably, it was nowhere to be seen.

So, it’s been a pretty eventful week as far as Paddy is concerned. There’s certainly never a dull moment with him around, even if I have gained a few more grey hairs!