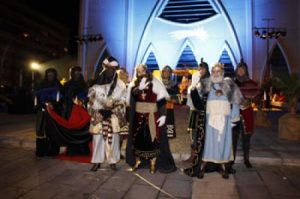 The Three Kings arrive in the port in Torrevieja

Christmas in Spain is not so commercialised as in other areas of the western world, notably the UK and the USA. Christmas preparations don’t start until the middle of December, and while it’s a family time, the main occasion for gifts and celebrations is Epiphany, or ‘Dia de los Reyes.’ (Day of the Kings)

Tradition has it that the Three Kings travelled through Spain on their way to Bethlehem to welcome the Baby Jesus, and to mark this, Spanish children put out their shoes on the night before Epiphany, January 5th. They are rewarded with presents, which legend has it are left by Balthazar, riding a donkey.

That’s the Spanish equivalent of Santa Claus and his reindeer, and in areas of Spain like Alicante province, where there is a large British expat population,  Spanish and English children have the best of both worlds. English parents eager to embrace local customs encourage their children to put out their shoes on Epiphany Eve, and Spanish parents give in to their children’s demands for presents on Christmas Morning, just like their English amigos. However, Dia de los Reyes remains the main gift fest in Spanish homes.

In villages, towns and cities all over Spain, the Three Kings arrive at around 6.00pm on Epiphany Eve. The tiniest village has a ‘Three Kings Parade,’ when local men specially chosen for the honour will parade through the streets, throwing gifts of sweets to children and adults alike. In Algorfa, the kings are particularly generous, especially to pretty ladies in the crowd.

The bigger the town, the more elaborate the arrival of the Kings and the ensuing parade. In Torrevieja,the Kings traditionally arrive by sea, and then proceed to the main town square, led by elves who throw gifts to the crowd, and various animals led by royal pages dressed in the garb of Arabs, Egyptians and Romans. Oriental dancers entertain the huge crowds. The Kings ride on camels at the rear of the parade, and are heralded by brass bands. In total, around 500 people participate in the parade.

All Three Kings Parades end with a church service, after which the families go home to a celebration meal, before the children polish their shoes prior to leaving them outside the front door for Balthazar. On 6th January, the Kings visit local hospitals, distributing gifts to sick children.

In a land where the fiesta is king, the Three Kings Fiesta is the most important of the year. The Spanish certainly know how to party, and Epiphany, as well as being an important religious festival, is one of the biggest parties of the year, whether you live in a tiny village or a big city.