The Seiner’s Arms, Perranporth, Cornwall – A great place for a celebration! 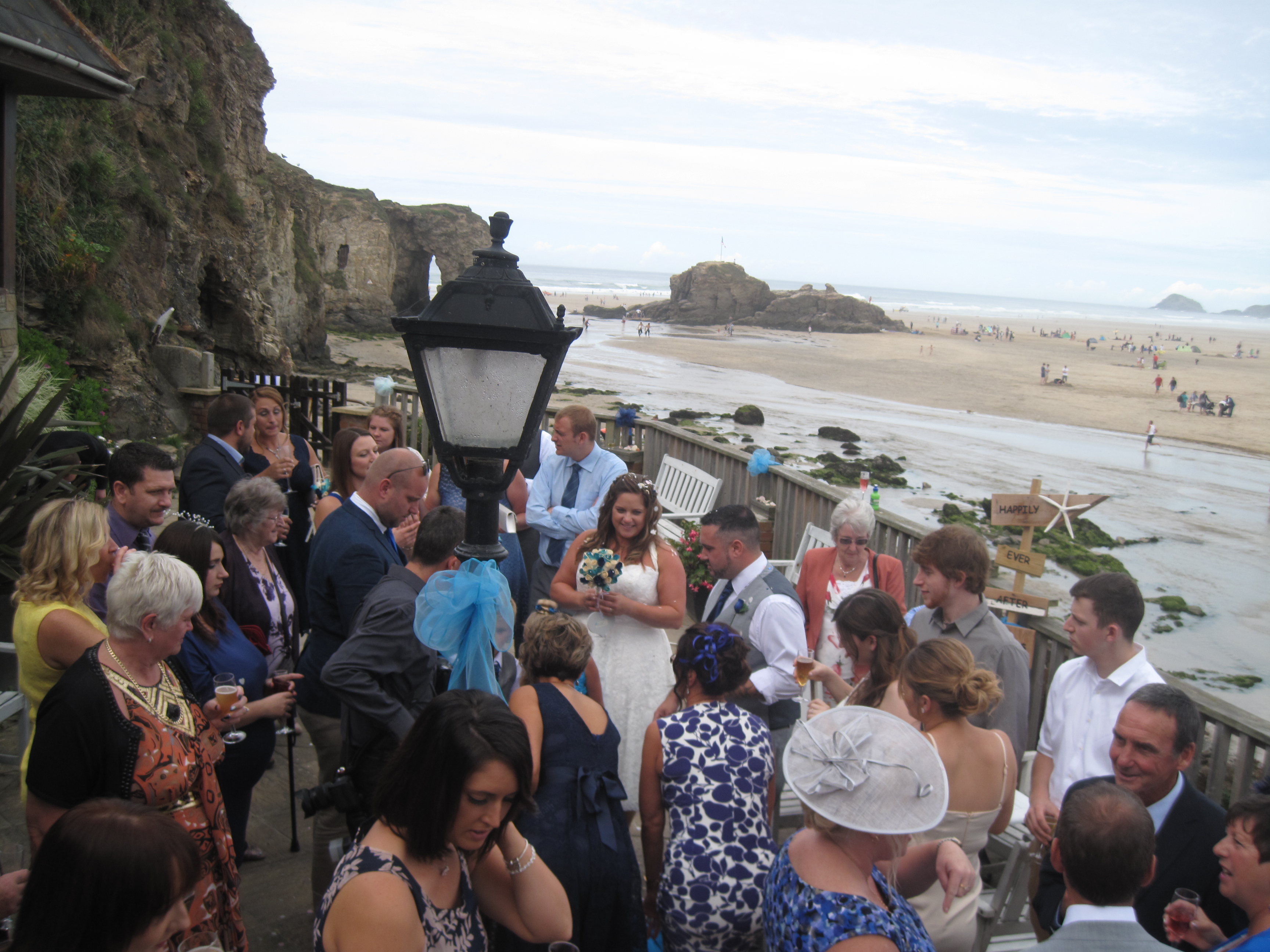 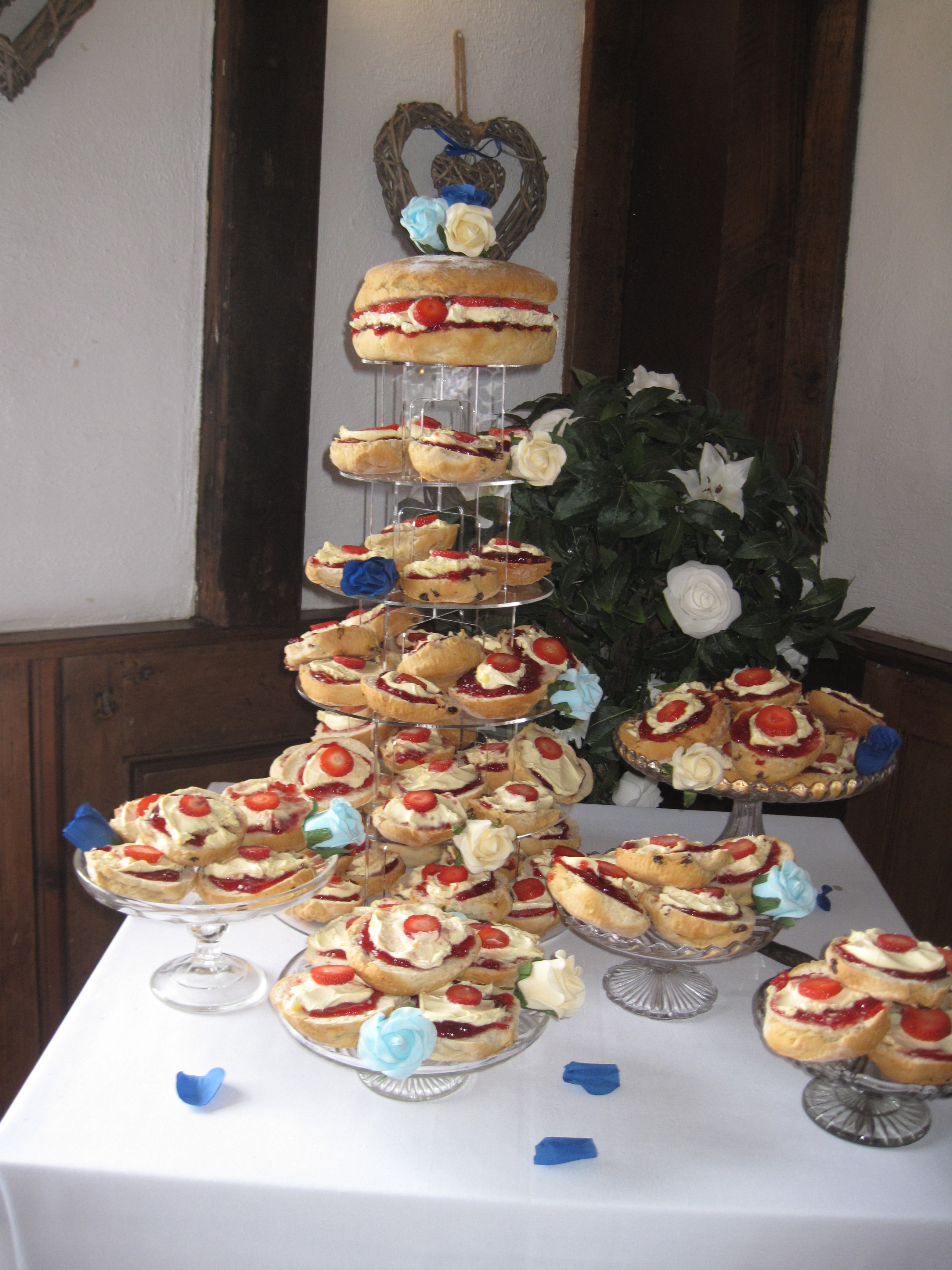 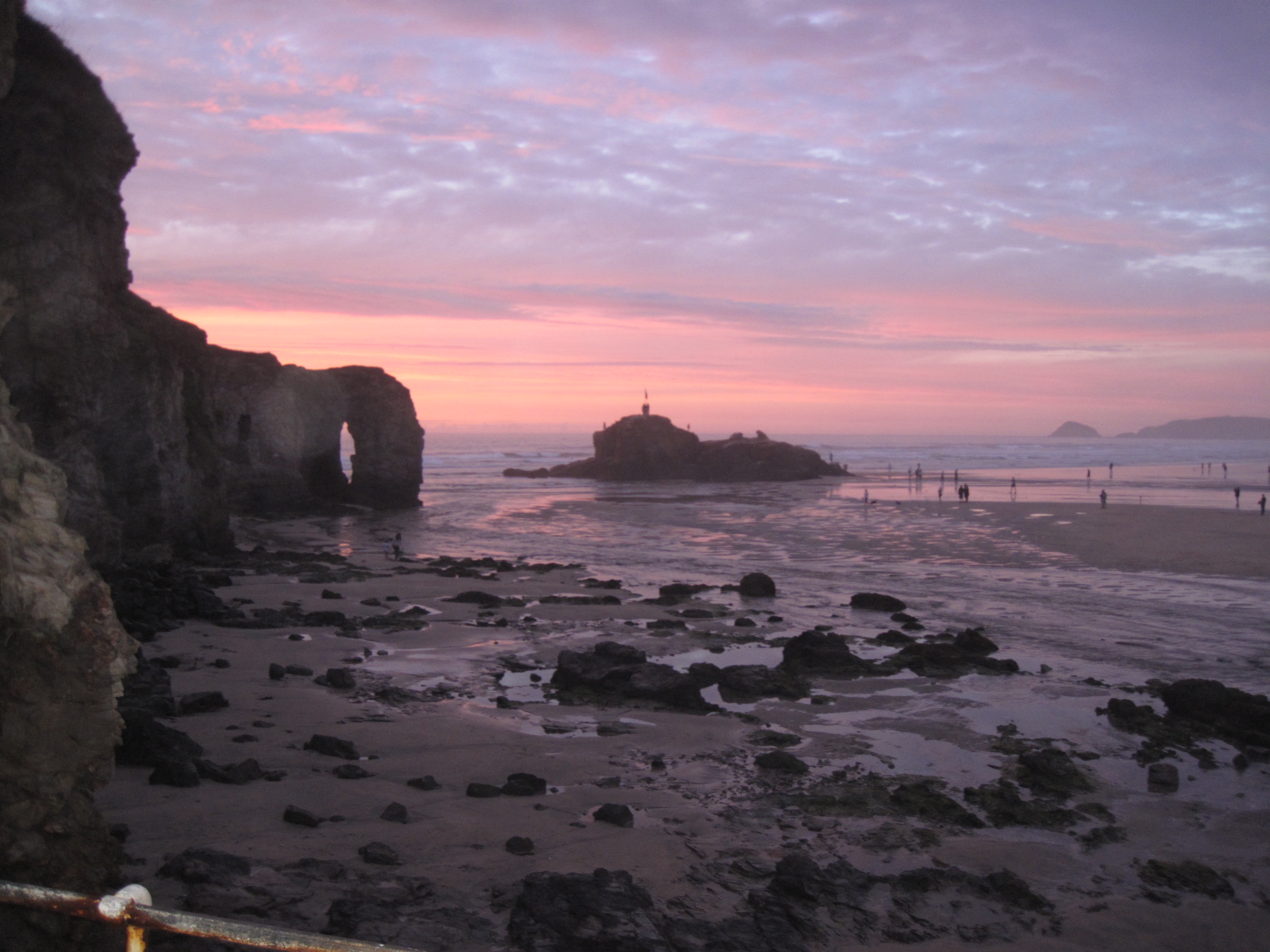 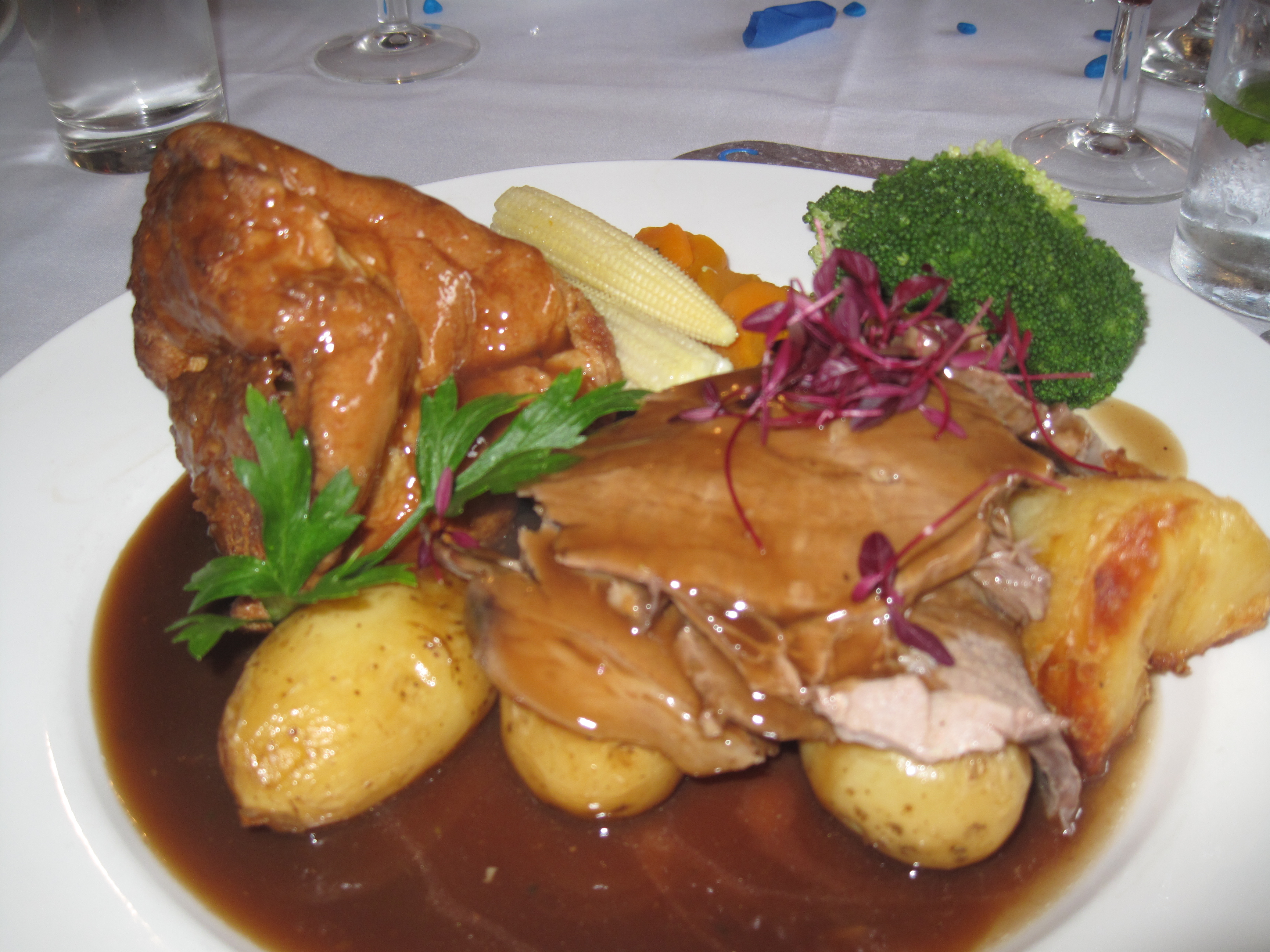 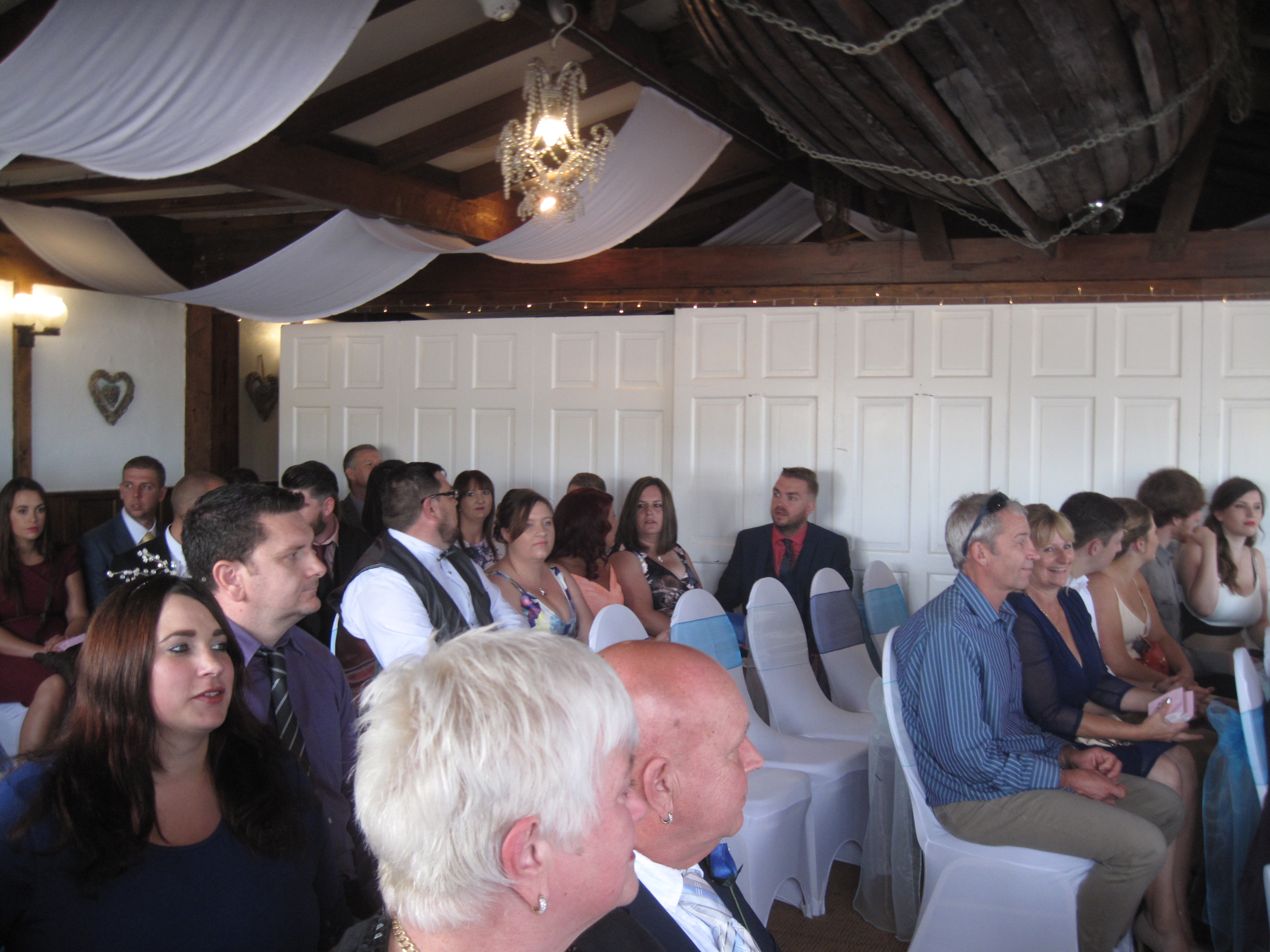 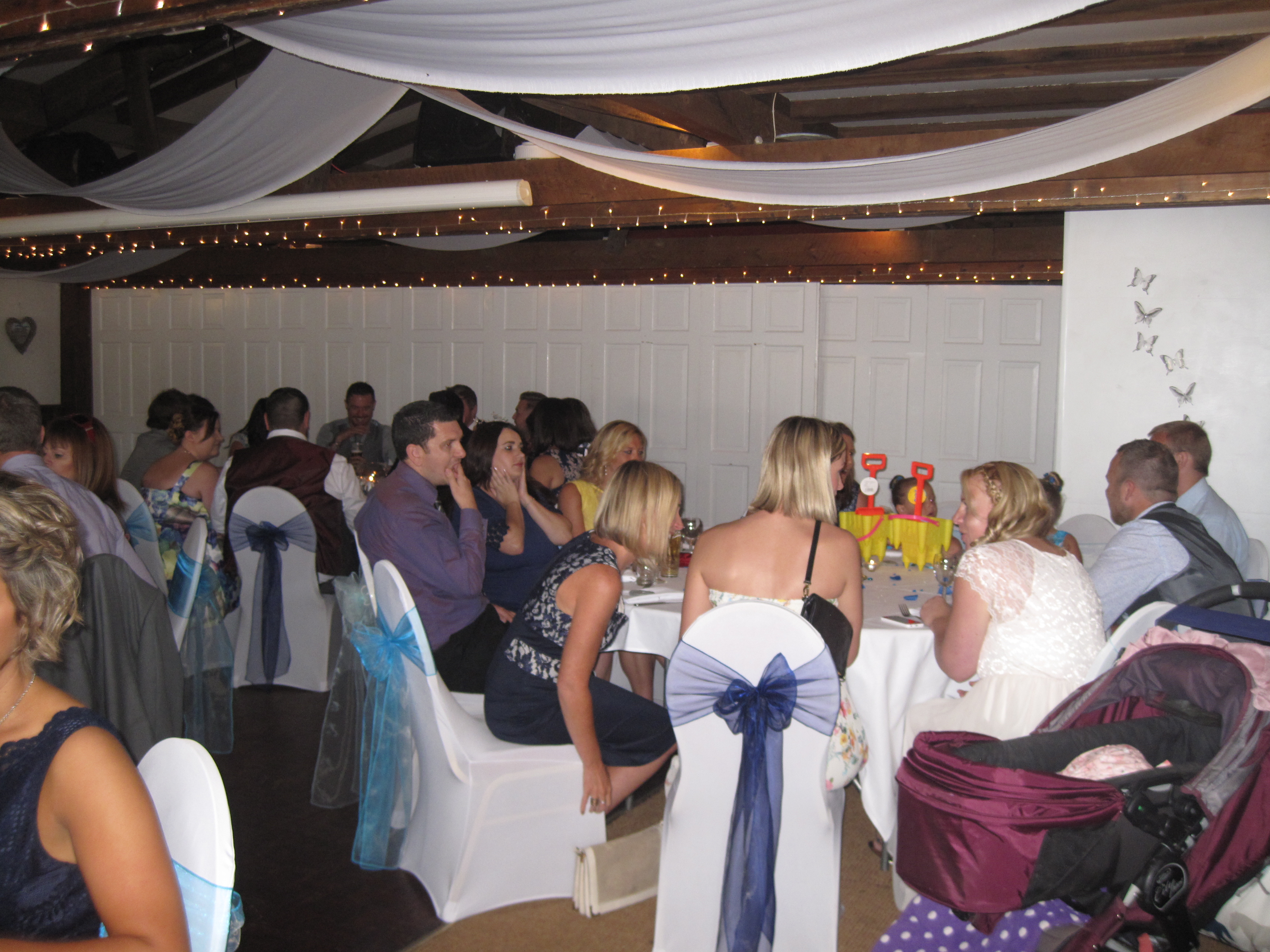 One of the main reasons for our UK trip at this particular time of year was to attend our grandson’s wedding at the Seiner’s Arms, Perranporth, North Cornwall. Although I know Perranporth well from holidays when the kids were small – I well remember one year when the lovely cool beach breeze fooled me into thinking the sun wasn’t too hot and I ended up looking like a lobster – I’d never heard of the Seiner’s Arms. Still, the family had checked it out thoroughly, and they’re a discerning lot, so we knew we were in for a great weekend.

All we needed was the weather – and we got it! Most of the family arrived on the Friday, so we could relax ahead of the big day, We were delighted to have rooms that looked individual, homely and welcoming, with ornaments and stuff, just like you’d have at home, rather than clones of the rest of the rooms.And for an extra £5, we had a sea view too.

Even better, there was a real key for the door, instead of a plastic card that has to be inserted with precision for exactly the right number of nanoseconds if you ever want to get to your bed or get ready to go out.It’s also that rare species – a pet friendly hotel. Dogs are welcome in the rooms and in the bars and on the terraces, and Perranporth Beach allows dogs all year round, so it’s a great place to take your pooch.

There were lovely touches that showed the staff had considered their guests – like plenty of teabags and coffee, along with a notice saying if you needed more, or if you wanted fresh milk, just ask a member of staff. In some hotels I’ve stayed in, you’re made to feel like Oliver Twist if you have the temerity to ask for an extra teabag, and fresh milk is restricted to the breakfast table. Also, in a nod to technology, there was an extension lead with several extra sockets for phones, Ipads, satnavs, curling tongs, straighteners – whatever you had, you could plug it in without swapping plugs over.

The free wifi was accessible in every room, without the hassle of getting a password, so you could update your Facebook – or in my case, finish off a couple of articles for deadlines – in the privacy of your room. If you needed anything extra – like an iron for instance – it appeared within five minutes of asking. The housekeeping staff were friendly, efficient and obliging – as they should be, but very often are not.

We didn’t take Paddy, purely because we were thinking of Saturday, when he wouldn’t have been allowed in the function  room, and would have had to spend several hours alone in the room. Still, Uncle Larry and Aunty June had come over to the caravan to look after him – and spoil him even more than I do – so he had a great weekend too.

Seiner’s – as it’s known locally – is literally right on the beach. One terrace runs alongside the sea wall, and the larger, higher terrace – which is closed off for exclusive use for functions – has steps down to the beach. This terrace was great for mingling, and for getting fantastic photos of sand, sea and sunsets. It really is a perfect place, in a perfect place.

However, any venue is only as good as the service it delivers, and again, Seiner’s ticks all the boxes. The hospitality staff were efficient yet friendly and approachable. If anything did go wrong, nobody knew about it – the whole thing seemed to run like clockwork. We were shepherded where we needed to be, when we needed to be there, gently but efficiently. I’ve been to a few weddings where the staff seem to forget we’re supposed to be enjoying ourselves and get a bit bossy when keeping it all on schedule, but that certainly didn’t happen at Seiner’s.

The food was excellent – piping hot, and plenty of it. Roast beef with all the trimmings, special meals for the kids and a vegetarian option. I liked that the children were served first, so they could get on with their dinner then get back to playing – kids aren’t really impressed by weddings, and the staff seemed to realise that.

The thing that impressed me most about the food though was the wedding cake -it was like nothing I’d ever seen before. Forget 3-tier fruit cake, this was a scone cake, and it looked fabulous. Lighter than fruit cake too after a big meal. In the evening, there was a pig roast with salads – great food, with off-the-wall touches to make it all an individual experience. I’ve been to weddings where the food was more lavish, but never to one where it was so plentiful and well presented.

Talking of food, the breakfasts at Seiner’s are also excellent. Bring an empty stomach with you, because you’ll need it! Help yourself to fruit juice, tea, coffee, cereals, fruit and yogurt, as you wait for the waitress to take your order for cooked breakfasts ranging from beans on toast to full English. That’s another plus – the hot breakfasts are freshly cooked, rather than sitting around swimming in their own grease while you decide what to eat.

With all this attention to detail, great food and excellent service, to say nothing of its beach side situation, you’d think rooms at Seiner’s would be expensive, but you’d think wrong. A double or twin en suite room costs just £80 per night including breakfast – £85 with a sea view. And there’s a small discount on rooms for people attending functions. Other beach side hotels in Perranporth charge £100 or more per night, and they are not situated so favourably as Seiner’s.

If you’re hosting a wedding or other celebration, or if you just want a beach break that doesn’t break the bank, why not try the Seiner’s Arms? I can guarantee you won’t be disappointed. See you there soon!

StumbleUpon
0
Posted in Sandra Not In Spain
Google+