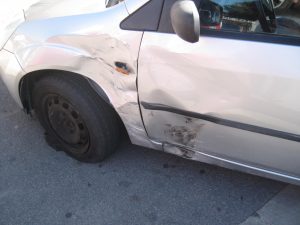 My Fiesta after the hit and run at the Guardamar roundabout on the CV905. Little did we know that was just the start of Stress Central!

Okay, so the cliffhanger from the last post is that, after almost 3 hours in the Quesada offices of Liberty Seguros, waiting in vain for the text that never came, regarding the courtesy car we still hadn’t got, we were heading for home to wait for the text that was definitely on the way. Then we would call the lovely and very helpful Maria Jesus (MJ) who would order a taxi to take us to collect our courtesy car.

With me so far, or have you lost the will to live? I wouldn’t blame you if you had, to be honest. Anyway, we headed home to Paddy, whose separation anxiety had ratcheted up several notches, having been home alone for almost 5 hours. Neither of us had the heart to tell him he was going to be left again, very shortly. Or at least we hoped he was. Two hours after arriving home, the text that was definitely on the way must have got lost, and I was just about to call MJ to communicate the news, when she beat me to it.

Apparently, even she had given up hope of ever receiving the elusive text, because she’d taken the radical step of ordering a taxi to take us to collect the courtesy car. At last we were getting somewhere. We knew that our own car was being repaired in Almoradi – about 5 kilometres away – so when MJ said the taxi would be collecting us at 5.00 pm, we weren’t too concerned. By 5.30, we’d be back at Piddock Place, complete with courtesy car, and Paddy wouldn’t have to spend too much more time home alone. The long day was almost over.

Actually, it wasn’t. Our courtesy car was not waiting for us in Almoradi – it was in Alicante, 55 kilometres away. Not unreasonably, I wanted to know why we needed to go to Alicante, and why the garage at Almoradi couldn’t supply a courtesy car.

‘Is way it works,’ said MJ, and I could sense the shrug of the shoulders. ‘Way it works’ also included me having to ring MJ on my mobile when the taxi driver arrived, so she could tell him what he needed to do. He turned out to be a she, and she arrived at 5.15, only 15 minutes late. That’s good for Spain, isn’t it? And she clearly wasn’t expecting more than one passenger, because she had her two kids in the back – a 4 year old boy and a 9 month old girl. So our taxi driver had to shuffle the kiddy seats along a bit to make room for me in the back.

Goodness only knows what Elf ‘n Safety in England would have made of it – or the fact that our taxi driver didn’t see the need to wait until she’d finished talking to MJ to head for Alicante. After 15 minutes, when she’d received instructions and enquired after MJ’s family and passed on the latest news about her own , (turned out they knew each other) I got my phone back, with the balance seriously depleted.

Always one to make the best of any situation, I practiced my Spanish on the taxi driver (another Maria) and played peek-a-boo with the baby. The boy was a bit wary of me. One question I asked Maria was how long she had lived in Alicante. Turned out she lived in Almoradi, so the next question was, did she know where we were going? Her ‘Si’ didn’t sound totally convincing, and the fact that she drove past the railway station three times before finally deciding to ask a fellow taxi driver for directions seemed to add weight to my suspicions.

By the time we found the car hire depot, it was 6.30 pm, and the Alicante rush hour was in full swing. And I remembered that I had never, ever driven in the city centre. The nearest I’d got was the N332 coast road, because if we go into Alicante, we go on the train. In a short while, I’d be driving a strange car out into the dark, in a city I’d never driven in, at the height of the Friday rush hour. It could only happen in Spain.

StumbleUpon
0
Posted in Only in Spain!