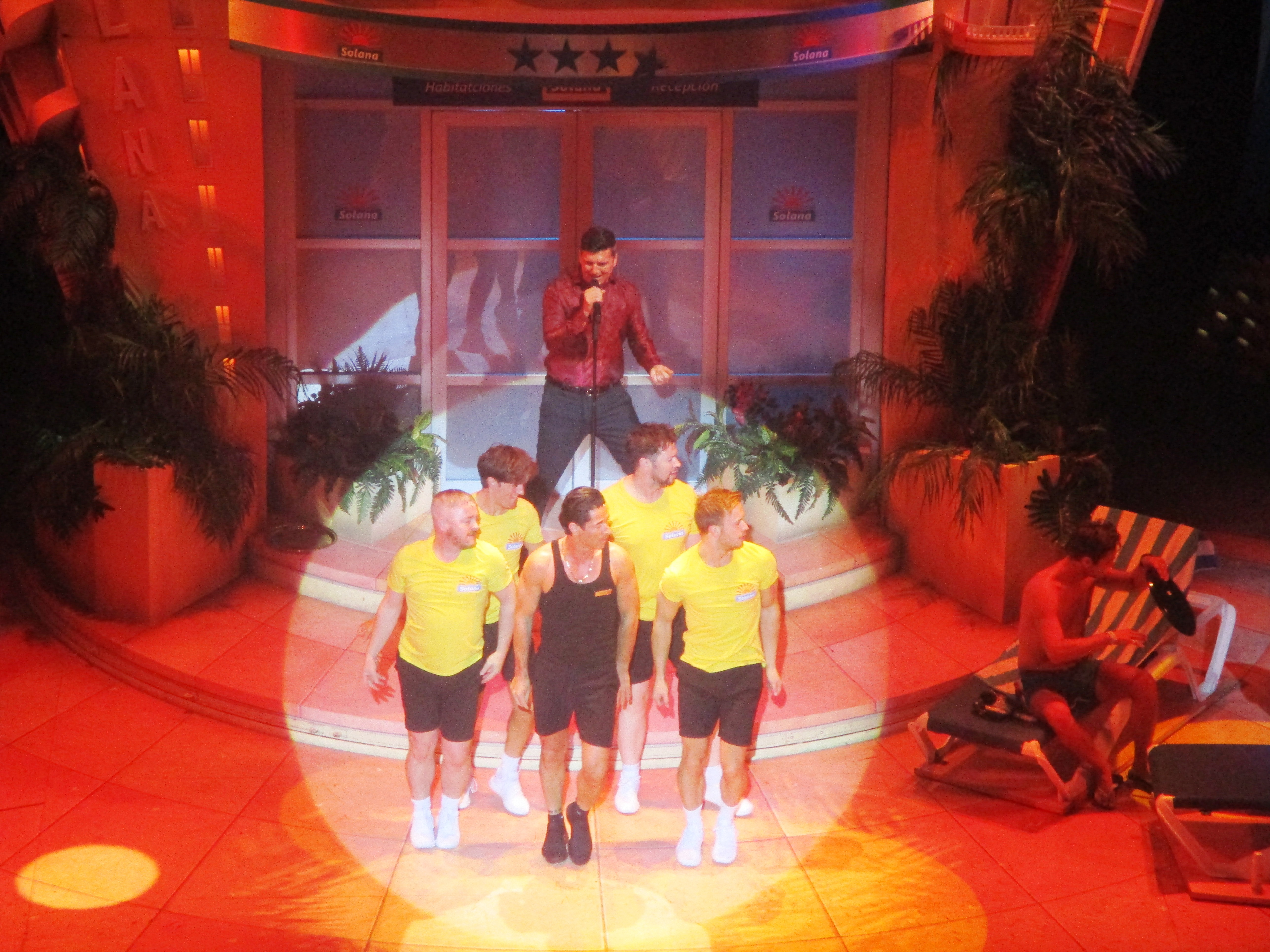 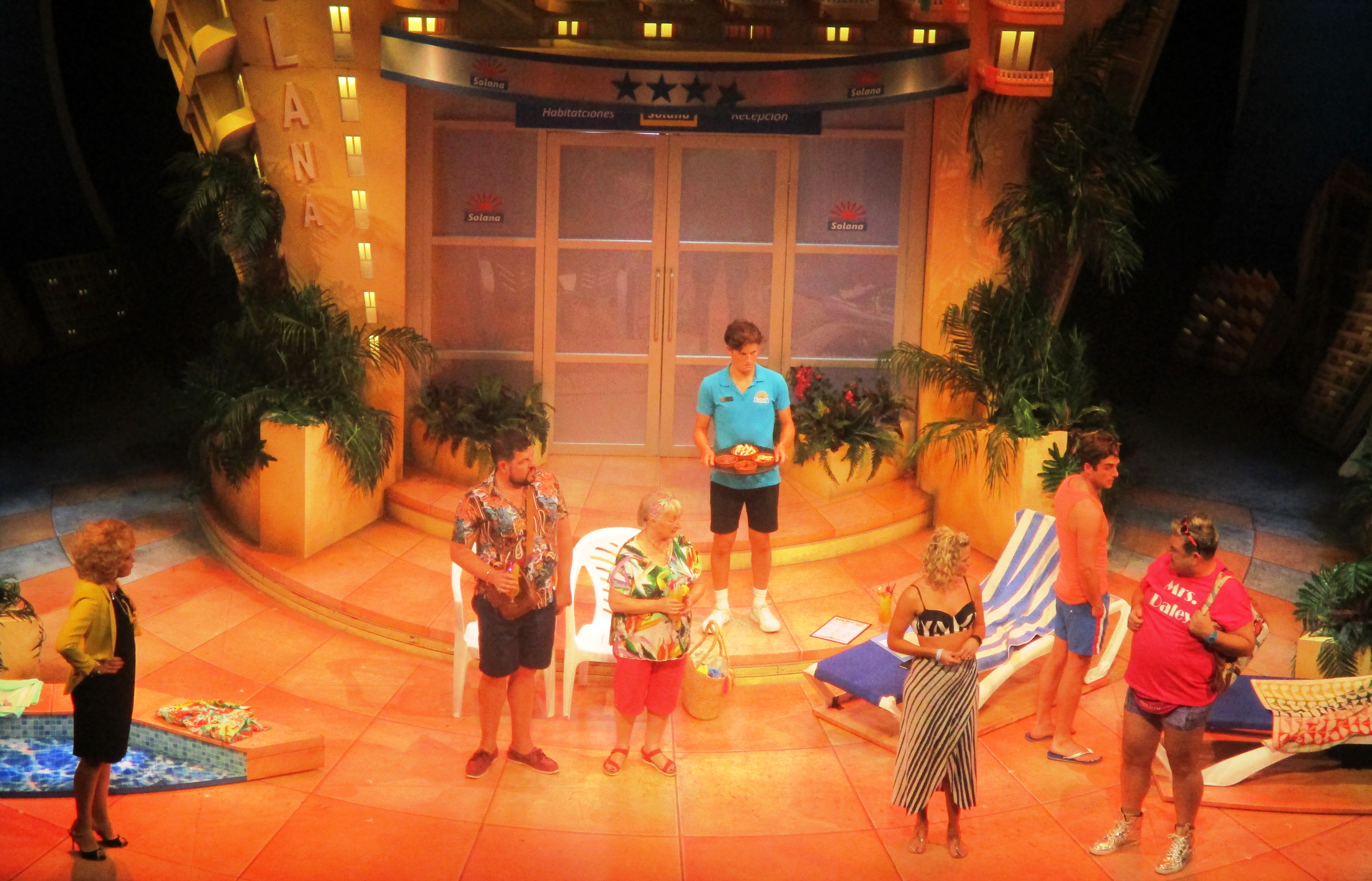 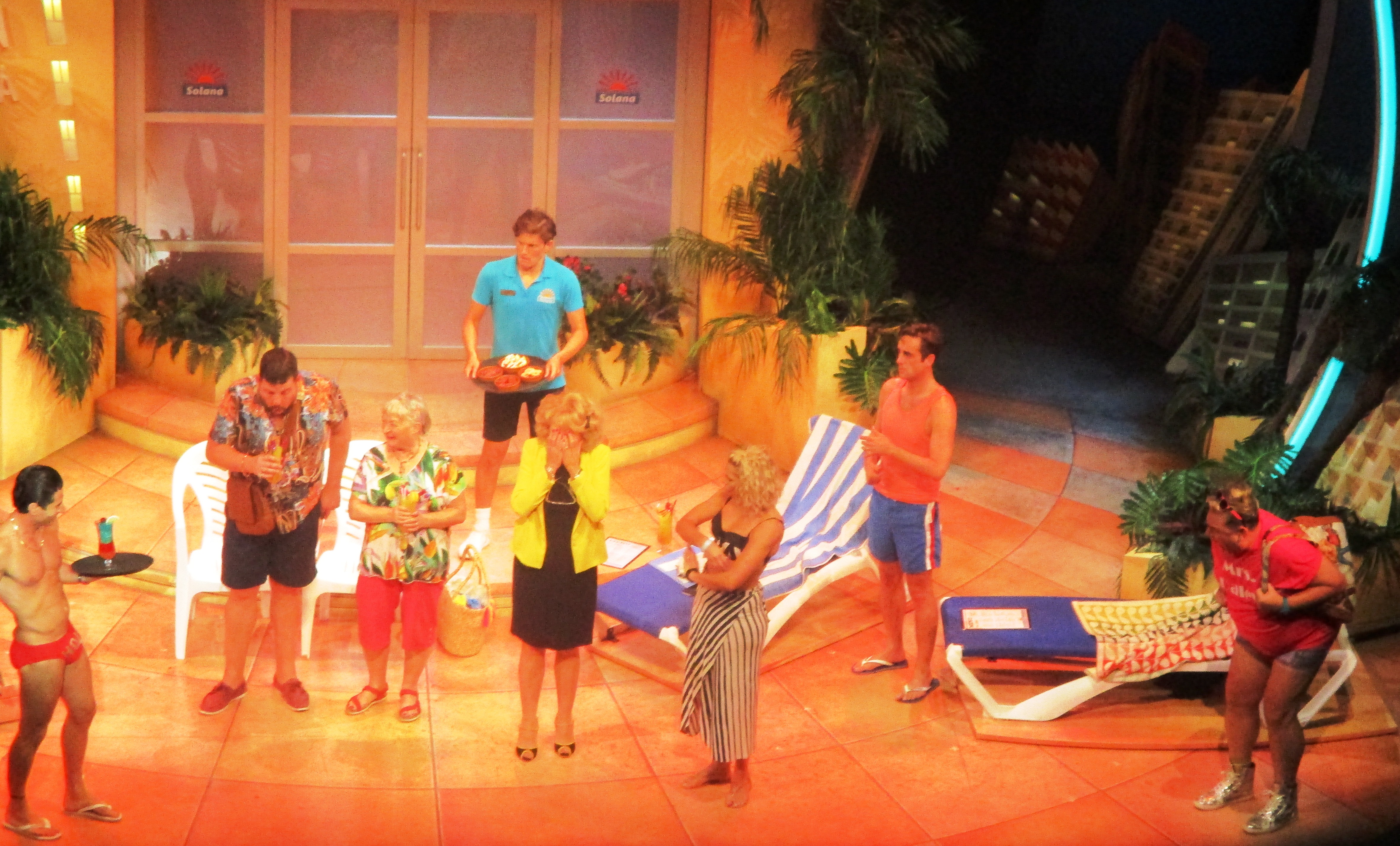 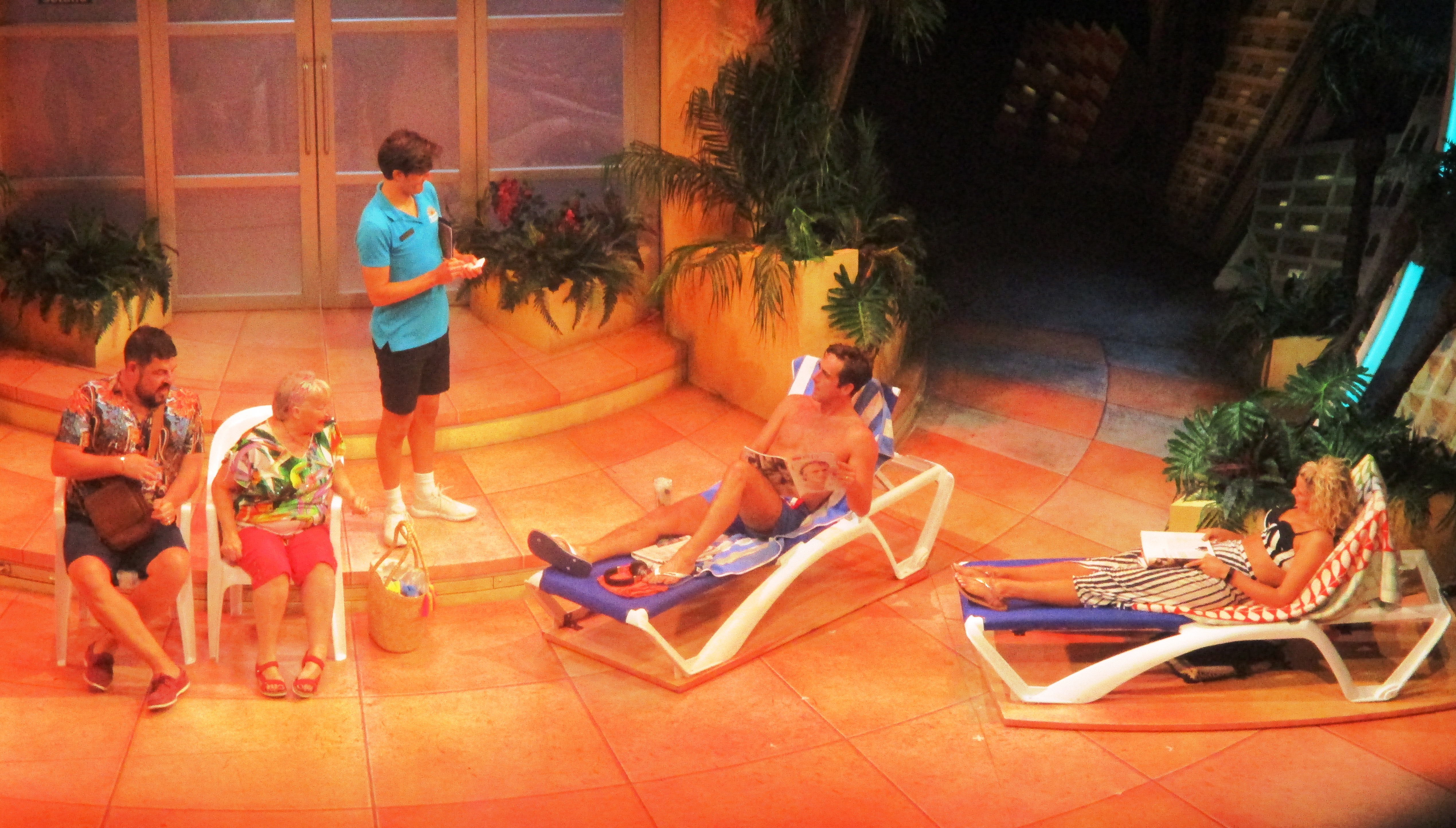 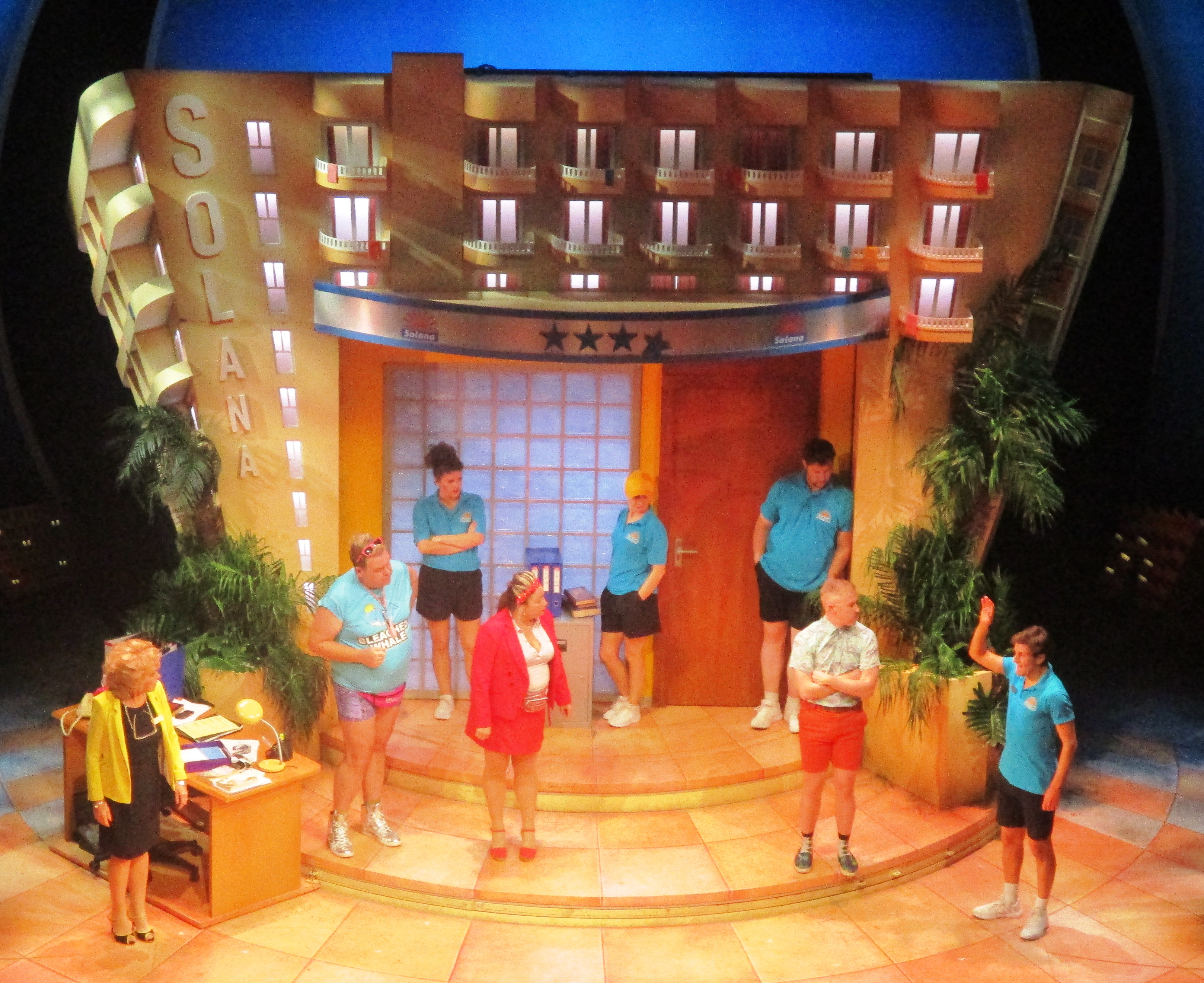 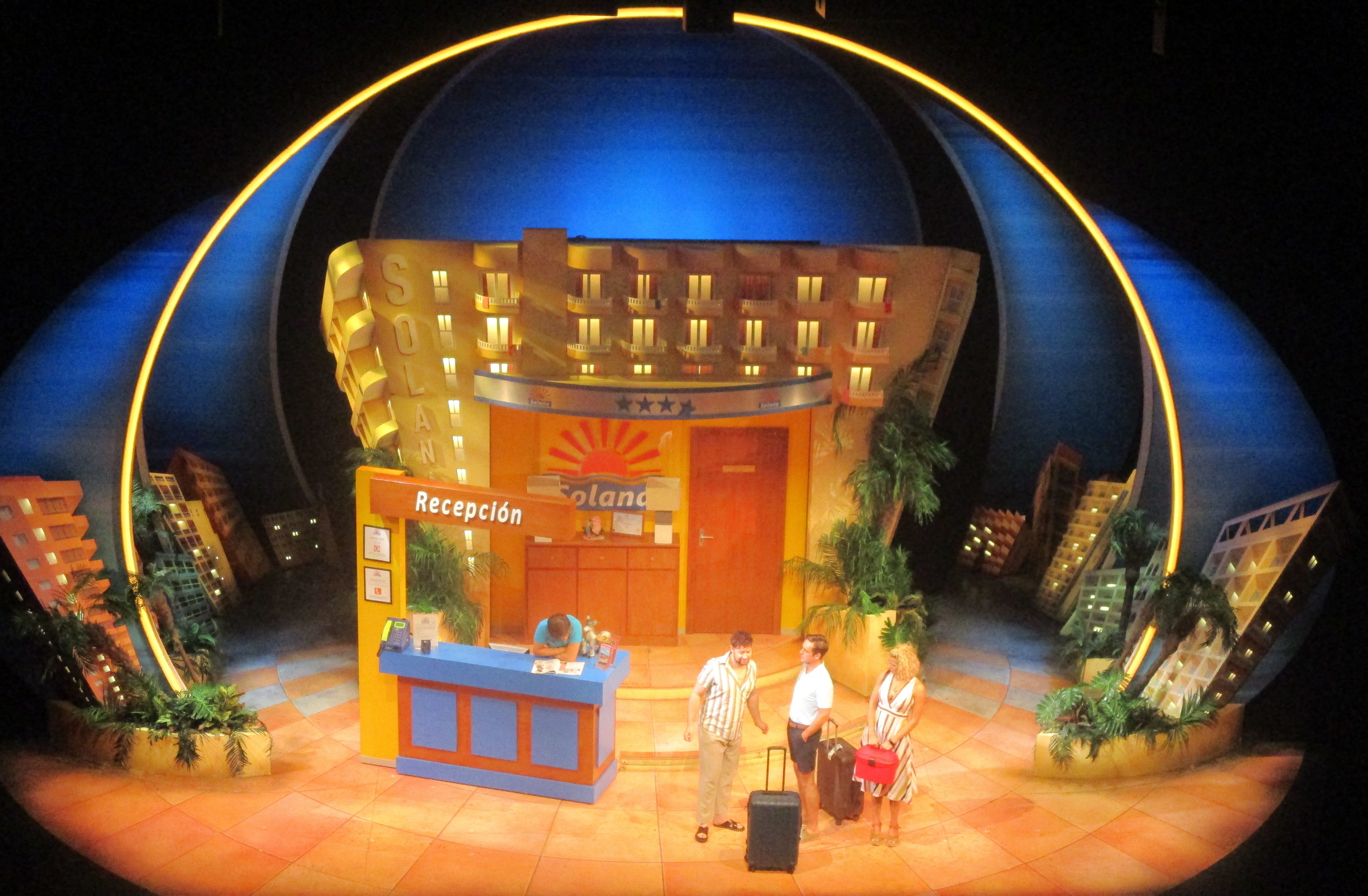 I’m a big fan of the ITV sitcom Benidorm, which has been running since 2007 – the year we bought our own Place in the Sun. I spend a lot of time in my apartment in Spain, which is about 90 minutes’ drive from Benidorm, and although some of the comic situations are exaggerated for effect, there’s a lot of truth in it.You’ll see more mobility scooters in Benidorm than in the rest of the Costa Blanca put together, and the resort is the karaoke capital of Spain. Benidorm is a place people either love or loathe, and personally, I love it. I go to the old town several times  a year on a day trip, and in the days BP (Before Paddy), we often enjoyed an all inclusive mini break in Benidorm with friends.

When the Benidorm Live stage show staged its official world premiere at the Theatre Royal, Plymouth recently, I decided to head along with a friend to see if the Solana Hotel staff were as funny in real life as they are on TV. And since many of the principal cast members started their careers in live theatre, and are therefore used to working with audiences, the atmosphere was electric right from the start.

I wondered how the company would manage to come up with a stage set that would successfully encompass the Solana Hotel reception area, the poolside, the Blow & Go Salon and Neptune’s Bar. However, set and costume designer Mark Walters went one better and came up with an effective revolving set that covered all those areas and also Solana Manager Joyce Temple-Savage’s office. The basic set is modelled on the opening credits of the TV show, and with each change of scene, the set spins around, and the cast and stage hands bring on any necessary props.

Several of the main characters from the TV series are in the stage show – Mateo (played by Jake Canuso), Joyce Temple-Savage (Sherrie Hewson), Jacqueline (Janine Duvitski), Liam (Aiden Gillen), hairdresser Kenneth (Tony Maudsley), and entertainment organiser Sam (Shelley Longworth).  The story line centres around a couple who are staying at the Solana because they were double booked in a more up market hotel in Altea, and a visiting undercover hotel inspector. Fair play to writer Derren Litten for managing to fool the cast – and the audience – right to the end, with a couple of red herrings, and a lot of hilarity on the way.

In fact, there were so many brilliant one liners and running gags, it’s difficult to remember them all, and the ones I can remember aren’t really suitable for a family friendly blog! Mateo is his usual supercillious self, mocking the English holidaymakers while trying to get the females of the species into bed. Jake Canuso is even hotter in the flesh than he is on screen, and he can dance too. He started his career as a dancer before moving into acting, and he’s also a good singer.

There are a number of song and dance routines, ably led by Asa Elliott, a singer on the Benidorm cabaret circuit who has appeared regularly in the TV series. All of the company acquit themselves well in song and dance, and to be honest, the musical numbers are a welcome relief for the chuckle muscles. Never mind laugh a minute, it’s practically laugh a second!

All the cast were excellent, but for me, Adam Gillen’s Liam stands out. His comic karaoke number is so bad, you need to be a really good singer to carry it off, and his performance brings laughs, sadness and pathos in equal measure. Benidorm Live is a real ensemble performance, and all the cast interact with each other well for maximum comedic effect. For once, predatory gay hairdresser Kenneth is the pursued rather than the pursuer, when Jacquiline’s friend Gay Derek takes a shine to him.  A wardrobe malfunction with Derek’s trousers led to some extra, unscripted hilarity.

If you like Benidorm, you’ll love Benidorm Live. It’s well-written, well acted, fast paced and really, really funny. I saw the show on Thursday, and my sides were still aching by Saturday. The show is touring the UK until April 2019, so check out the dates here to see if Benidorm Live is coming to your area. Tickets are selling fast, so don’t hang about. And give Matteo a hug from me while you’re there!

Note: The images displayed in the slideshow are my own, taken at the Theatre Royal, Plymouth on 25 October 2018. They are not intended to spoil enjoyment or give away the plot, merely to give a flavour of the show.