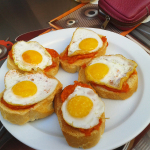 Tostada con tomate, topped with a fried egg for a substantial breakfast or snack

Tostada con tomate is everything that proper Spanish food ought to be – good quality ingredients simply prepared to provide a delicious taste of Spain. It’s a Spanish breakfast favourite which can also be enjoyed at any time of the day. The Spanish don’t really do breakfasts – lunch is generally the main meal of the day, and they tend have very late suppers. If the Spanish breakfast at all, it’s biscuits, pastries or tostada with fruit juice and coffee.

Tostada con tomate is toasted baguette with olive oil and tomatoes – because the Spanish don’t really do butter either. If you buy a toaster in Spain, you’ll find the slots are just the right size to toast a baguette which has been cut through the middle, then halved lengthwise. This is a great way to use up day old bread, which would otherwise be fed to the birds or consigned to the bin.

Tostada con tomate is a cheap, healthy and filling breakfast or snack which is really easy to make. It can also be served as an appetiser at any time of the day. If we have friends around for a barbecue, I always serve tostada con tomate, olives and banderillas while the food is cooking. This fills a gap while Tony does his barbecue thing without ruining everyone’s appetite for the main event.

When we have visitors from England, tostada con tomate makes a quick but satisfying breakfast on those mornings when we want to make an early start for sightseeing or a day on the beach. It’s also a healthy snack for children and teenagers who are always hungry.

Ingredients (serves 4 for breakfast or 6 – 8 as tapas)

Trim rounded ends from baguette and discard – or crumble for the birds! Cut bread in half, then slice each half lengthwise. Toast lightly.
When bread is toasted, prick surface with a fork, then drizzle olive oil over it. Start with the smaller amount, as you don’t want the bread to be too oily. It’s easier to add more oil than remove it!

Grate the tomato into a bowl, then spread over the bread. Use a coarse grater with an integral bowl, and grasp the top of the tomato firmly. The skin will peel away to form a shield for your fingertips as you grate away.You can also halve the tomato if you want, but I prefer to work with whole ones, unless they’re really big. Now add pepper to taste and a drizzle of olive oil. This is where I depart from Spanish tradition, because the custom is to serve salt with the tostada. I find the pepper gives quite enough flavour, and of course it’s healthier. For a more substantial breakfast or snack, you can add a fried egg.

And if you want to make up a batch ahead of when you need it, it will keep for several days in the fridge. You can also spread the tomato on bread before adding the filling to make healthier sandwiches. It works very well with cheese, tuna, chicken or ham.If you serve your tostada at lunch or in the evening, you may like to cut a clove of garlic in half and rub the cut side over the bread before spreading with the tomato. It’s a bit much for breakfast though. You can buy tomato paste for your tostada in the supermarket, but it’s cheap, quick and easy to make, so why on earth would you want to?