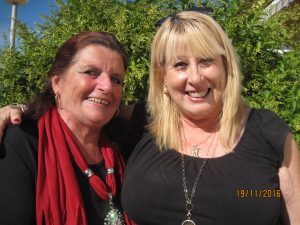 Me with my spiritual mentor, the Quirky Medium, Alison Wynn-Ryder

Monday is one of my favourite days, because it’s my Psychic Development Group with the lovely Alison Wynne-Ryder, aka The Quirky Medium. Whether you believe in ‘that sort of thing’ or not – and I certainly do – there are some things that have to be put down to synchronicity, as they’re more than mere coincidence. Monday was no exception. We were all nervous about doing our first-ever psychic readings, and Alison tried to prepare us and relax us by relating a funny story from one of her own readings.

She explained that we should always pass on any information that came to us, however irrelevant it may seem, because somebody will be able to take it and make sense of it. Of course, sometimes it may be inappropriate, or even downright rude, but it has to be passed on, because it’s given for a reason. This particular message – and those of a sensitive disposition should look away now –  was ‘Smelly Knickers!’ Being  a well brought up Northern Lass, Alison was understandably reluctant to transmit this to the lady sitting with her, but she knew she’d been given the phrase to bring help or comfort. With a bit of cleaning up – which of course  is necessary with knickers, particularly those of a pungent persuasion – Alison delivered the message as ‘Knickers.’

The lady in question was shocked, stunned and staggered in equal measure, and it wasn’t because Alison had an obvious obssession with underwear. It turned  out that the lady’s brother had passed away some years before, and they’d sometimes debated the existence or otherwise of an afterlife. The two had agreed that, if there  was indeed a place where they could communicate with each other after death, they would have a key phrase so that they would know it was a genuine contact from the spirit world. The phrase they agreed on was … ‘Smelly Knickers!’

You may be wondering where synchronicity comes in here, and I’m about to explain it – or at least try to! Earlier in the day, my husband, myself and a good friend had been invited to the boatyard in Torrevieja, where a friend of ours was repairing and repainting his boat. Older than the Titanic, and still very much seaworthy, the beautiful craft had saved the lives of countless people before it came into our friend’s possession. She’d served as a lifeboat, and was one of the flotilla of boats that rescued soldiers from the beaches of Dunkirk in 1940. Now she was having a bit of pampering, and we were going to see the progress before she was returned to her berth in the nearby marina.

My friend – who shall remain nameless for reasons which will quickly become apparent – has lost a lot of weight over the last two years. So much so that the knickers she was wearing were now rather loose. The 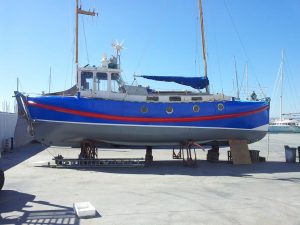 The beautiful boat that caused dignity problems for my friend

nearer we got to the boatyard, the nearer the unfortunate underwear got to the pavement, until there was nothing my friend could do other than slide behind a convenient advertising board, step gracefully out of them and consign them to the bin.

Problem solved – or so we thought. What we hadn’t considered was that a boat out of the water cannot be accessed without the aid of a ladder. And for safety reasons, somebody has to stay at the bottom of the ladder while others ascend.  My friend’s discomfiture was not helped when my boat-owning friend said he’d stay at the bottom of the ladder and try not to peek at her (non-existent) knickers! I salvaged the situation by following closely behind her, so we crossed that hurdle safely, with her dignity more or less intact.

After a pleasant interlude admiring the original teak fittings of the boat and sinking a cold beer or two, it was time to descend the ladder again. My friend was doing quite well, until there was a bit of banter between the boat owner and his assistant. The assistant said ‘No peeking at her knickers on the way down!’ My other friend replied, ‘I wouldn’t dream of looking at her pink knickers with white spots on!’ The assistant then delivered the killer line: ‘You’re a liar – she’s not wearing any!’

At this point, both myself and my commando friend collapsed in a heap, because both men were right. In the nearest bin to the boatyard, a pair of overstretched knickers waited patiently to be collected by the municipal cleaners. They were pink, and they were decorated with white spots. Work that one out if you can!