Once again, Paddy has asked to do a guest post on the blog. Since I’ve taught him how to throw a sentence together, and how to spell, I can hardly refuse – especially since the last time he did a guest post he got more views than all of my posts during the month put together! Ah well, over to Paddy, who wants to get something off his chest. According to him, he hasn’t had the best of weeks. According to me, he’s an ungrateful, attention-seeking pup, but hey, it’s a free country, so over to Paddy: 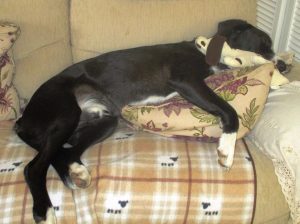 Relaxing after my traumatic week. Things can only get better.

“Hello everyone,  and welcome to my guest post. I felt I had to chip in before Mummy started spreading lies and exaggerating everything on Facebook. To say I haven’t had the best of weeks is an absolute understatement. And most of it is Mummy’s fault – she just doesn’t realise how sensitive a soul I am.

The big problem is Gizmo. The longer we spend together, the bossier he gets. I mean, I’m scared to even walk past him these days – everything I do seems to be wrong. And Mummy and Aunty Glenys are no help. Instead of telling him to leave me alone, and giving him a flying lesson, they just laugh, and say I’m a wimp! Not only is that very hurtful, it’s totally untrue.

I’m not a wimp, but I am a sensible boy, and I’m not going to do anything that earns me a nip on the back legs from Killer Chihuahua. Okay, I am a bit frightened of him – but only frightened that I may choke on him if I do what he deserves and say ‘No more Mr Nice Guy’ and eat him. I don’t think Mummy and Aunty Glenys would be very happy about that though, so I’ve made a new friend.

He’s a very handsome dog – similar to me in fact, and I know we’d get on great, and between us, we could put Gizmo in his place. The problem is, my new friend is very shy. He won’t come out while everyone else is around. In fact, he waits until it’s dark, and Aunty Glenys has turned off the TV and taken Killer Chihuahua to bed. Then he plays hide and seek behind the TV screen or the conservatory window. No matter how much I talk to him, or how fast I wag my 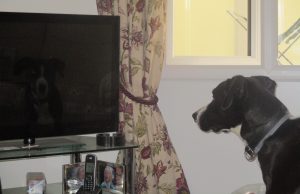 My shy doggie friend. I do hope he comes out to play soon.

tail, he just won’t come out to play.

It’s very frustrating for a friendly boy like me, so I cried a bit and asked Mummy to coax him out to play. She laughed, so I asked Uncle Tristan instead. Then he laughed, and said, ‘It’s your reflection, you daft dog.’ Now, I don’t know what a reflection is, but it isn’t a breed of dog I’ve ever heard of. Obviously, they don’t want me to play with my new friend in case Gizmo gets jealous. I’ll outwit them though – I’ll save a couple of my favourite treats to tempt him out to play.

Really, the only thing that makes life worthwhile these days is when Mummy takes me out in the car, without Gizmo. It’s lovely to see him cry to come with us, and even better when Mummy tells him he can’t come, because she can’t manage two dogs on her own. My Mummy can do anything, so I’m sure she could – she’s just giving me some breathing space from Killer Chihuahua, so we can share some quality time together.

However, on Tuesday, even that got a bit scary. We’d been out all day, and were on our way home, when the car started making funny noises and juddering. Mummy slowed down, and told me not to worry, and we’d soon be home and safe. The words had hardly left her mouth when there was an enormous bang, right behind where I was sitting, looking for dogs and cats to bark at to liven up the drive home.

I thought the world had ended, and I did the only sensible thing and jumped into the front with Mummy, to get away from the bang. That was easier said than done, because I had to work out how to free the restraining strap from the seatbelt, but I was a Desperate Dog, and I managed it. I was shaking like a leaf, but did I get any sympathy? Not a bit of it! Mummy just laughed, and said, ‘Don’t be such a baby, Paddy – it’s just a blow out, that’s all.’

I’ve never been so insulted in my life! Mummy is always telling me off for ‘blowing off,’ but I never make such a loud noise as that – it’s not polite. A blow out must be very similar to a blow off, so in other words, I got the blame for something that frightened me almost to death. I thought my time had come to cross the Rainbow Bridge, and all she could do was laugh!

I’ll never understand humans if I live to be 100. There we were, miles from home, almost dead, and Mummy is on the phone and taking photos. I was so glad to see Aunty Glenys, I just leaped into her car, and didn’t even mind Gizmo barking at me. 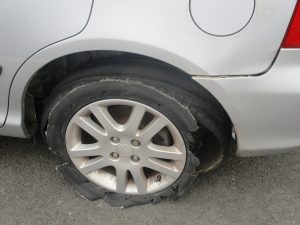 Mummy’s car after the blow out. And she expected me to get back in there afterwards!

I was pretty sure I’d never see the car again – I mean, how could it survive such a major disaster? However, I was wrong, and the next day, the car came back.  Being a sensible boy, I wasn’t going anywhere near it – it was a death trap, obviously. You’d have thought Mummy would have understood, but no, she said I had to go in the car with her. No way was that happening, so I headed back to Aunty Glenys’s. I was so traumatised, I’d rather spend the day with Killer Chihuahua than go out in the car with Mummy – that’s how bad it was.

Did she understand and respect my feelings? What do you think? She actually bundled me into the car and said “Paddy stop over reacting!” Can you believe that? It was most undignified. First she grabbed my front paws and put them on the back seat, then lifted my back legs and pretty much threw me into the car. And that smarmy black cat from next door saw everything! I’ll never be able to hold my head up in the street again, because I bet that rotten cat’s told everyone.

Whoever first said ‘It’s a dog’s life’ was not wrong. I’m going to have to rethink my position after this week. If anyone would like to offer a loving home to a very good boy, I may seriously consider it. Mummy needs to examine her recent behaviour and think how she can make amends, otherwise she’s going to be very sorry. Thanks for listening, and please, if you love me, tell Mummy and Aunty Glenys to go easy on me. I may be a big strong boy, but I do have feelings, you know!” Paddy.