The Secret of the Statement Dress! 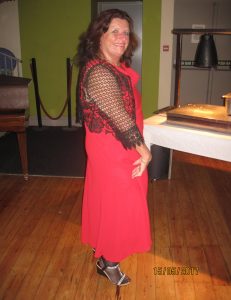 In my Statement Dress at the UK premiere of The Cucaracha Club. Although I say it myself as shouldn’t, I don’t scrub up too badly, do I?

As Sandra In Spain, some pretty exciting events have come my way. However, the prize for the Best Thing So Far has to go to the invitation I received to the UK premiere of The Cucaracha Club. That’s the independent spy thriller filmed entirely on location in Torrevieja, if you don’t know. Lots of my friends were involved in the making of it, but that’s not why I’m promoting it – it’s a quality product that all the family can enjoy, and it really showcases the area where we live and the talent we can draw on.

Of course, now I had a major event to go to, I needed a new Statement Dress. Although I have about 247 dresses already – according to Tony, anyway – there was nothing that jumped out of the wardrobe and said ‘Wear me to the premiere.’ Nothing had that ‘Wow’ factor. As there was a distinct lack of sympathy from Tony, I turned to Billie Anthony Gaddess, the screenwriter, executive producer and male lead in the film. After all, the premiere was on his home turf, at the Darlington Arts Festival, so he’d be sure to help. Or maybe not. This is a mere man, talking about dresses. I wasn’t enthused or encouraged by his response, which went something like this: ‘Howay man, bonny lass, divvin’ git up a height.  You’ll lyeuk canny in owt, an’ it isn’t a posh dee.’

For the benefit of those who haven’t been binge watching Auf Weidersehne Pet and Byker Grove in order to get fluent in the Geordie lingo, what Billie actually said was ‘It’s okay, lovely lady, don’t upset yourself. You’ll look nice in anything, and it isn’t a posh do.’

Well, posh do or not, this was the best excuse for a new frock I’ve had since my grandson’s christening last year, so it wasn’t going to waste. I had a pretty good idea of what I wanted. Red – of course – and something not too dressy or casual, but different enough to make a statement of success, since I was with the team that had put together a really good film, despite the fact that many of them had never been behind or in front of a camera before. It was dress to impress time.

I had around two months to settle on the right dress, and I was looking forward to a few girly shopping trips with my friend Joan. And if we happened to pick up a few more frocks in the search for my statement dress, so be it. However, either Fate took a hand, or Tony bribed someone Upstairs as he imagined weekly shopping trips and hundreds of Euros being sacrificed in the attempt to find ‘The One,’ because less than a week into the search, I found exactly what I was looking for. It was red, it was smart but not too dressy, and it had the ‘Wow’ factor, and then some. The only slight problem was it seemed a  bit clingy around the tummy area, but I reckoned a week on the Cabbage Soup Diet and a nice pair of ‘pull you in pants’ would sort that out, along with a few extra walks for Paddy.

Joan and I didn’t dip out on our shopping trips though, because I had to accessorise it. I got the sandals sorted pretty easily, and the bag, but we needed an expedition to find a suitable jacket. We struck gold in 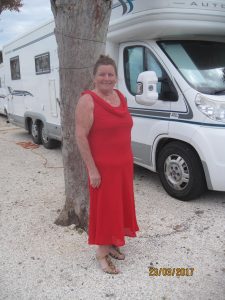 The Statement Dress when I first bought it – work needed in the tummy area, but I knew it would look alright on the night – and it did!

Torrevieja, and also snagged ourselves a couple of tops and cardigans for good measure.

I was pretty confident as I got ready to unleash myself on the glitterati of Darlington. The combination of Cabbage Soup Diet, extra walkies around the orange groves and lycra laden pants had worked their miracle,

and I didn’t look half bad. I got admiring looks and compliments from men and women, and I felt like a million dollars. One friend was particularly impressed, and asked where I’d got the frock from. I told her it was a Roman Oroginals dress, which I’d bought in Spain. ‘Ooh – that must have set you back a couple of hundred Euros,’ she said. ‘I bet Tony doesn’t know how much you piad for it.’

She’s wrong, actually. Tony knows exactly how much I paid for it. And for once, he didn’t need resuscitating when I told him. He thinks you can still buy a decent frock with five bob and a handful of clothing coupons, so anything costing more than €10 is likely to ramp up his atrial fibrillation more than a little bit.

So, there’s a clue to the Secret of the Statement Dress. It was less than €10. A lot less, actually. I didn’t lie about it being a Roman Originals and buying it in Spain. I bought it in a charity shop in Javea, while we were on a motor home rally. It was priced at €5, but on the day in question, everything was reduced to clear to just €2 per item. I bought a bath mat to use in the shower block on our campsite at the same time, and that cost three times as much as the dress!

Yes, you read that right – my ‘Wow’ factor dress cost just €2 – around one-hundredth of my friend’s pretty accurate estimate.  You can dress to impress for less – but don’t let on to anyone, will you? I’m only telling you because I know you’ll keep the Secret of the Statement Dress for me.

2 Responses to The Secret of the Statement Dress!