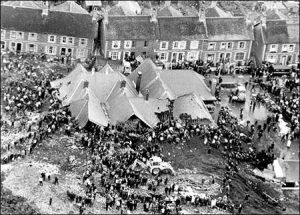 Taking my customary morning stroll through Facebook today, I noticed that it’s the 49th anniversary of the Aberfan disaster. If you don’t know what it was all about, you can get the details here. In the UK, everyone seems to remember what they were doing and where they were when the news of the disaster broke. It’s something that still raises deep emotions today, 49 years on, just as everyone remembers where they were when JFK was assassinated in Dallas.

Lots of people are sharing their memories of the day on Facebook and elsewhere, and it’s also vivid in my memory bank, because on the day of the disaster, I was travelling back from an outdoor pursuits trip to Capel Curig Youth Hostel, Bews-y-Coed, in North Wales. I was 14, and I’d had a great time with my friends from Wolverhampton Girls’ High School. Two highlights of the trip stick with me after all these years, and we were giggling about them as we made our way back to the school.

My mother was a fantastic knitter, and she’d made me a new sweater for the trip. It was in my favourite colour, red – which is still my favourite, by the way – and it had flecks of beige and black in it. Mum said to wear it in the evenings, not when we were off doing stuff in Snowdonia, because it always rained in Wales, and she didn’t want me to get my new sweater wet, as it would probably stretch. Being a teenager with a new sweater who knew better than my mother, I wore it on the first morning. Of course, it got soaking wet, and so did I. Welsh rain penetrates everything – even supposedly waterproof coats.

It was still raining when we got back, and there was no way the sweater was going to get dried outside, so a friend suggested I hang it on a coat hanger on the back of the door, and with luck, it would dry out before we went home. Of course, being 14 year olds, we knew it all. What we didn’t know was that if you want to dry a woollen garment naturally, first you wrap it in a towel to remove excess moisture, then you dry it flat to retain the original shape. Epic fail on both counts then. However, we learned the error of our ways in the middle of the night, when a piercing scream woke us from our slumbers. Naturally, we wanted to know what was the cause of it, and the owner of the scream soon let us know. ‘Sandra’s sweater’s haunted, and it’s coming to get us!’

Those 14 year olds who believed in ghosts – including Yours Truly – buried our heads under the blankets, but a couple of brave souls ventured out of their bunks to investigate. It did indeed appear that my sweater was haunted, because in the light of the moon, the sleeves were moving. However, no spirit was responsible. The good old Welsh rain, combined with the weight of the wool in the sweater, was stretching both the arms and the hem of said sweater before our very eyes. I did manage to get the sweater dry, and I went home in it. With a belt round the waist and the sleeves turned back, it made a fashionable mini dress. Sometimes being short has its advantages!

The second memory didn’t have such a happy ending. We’d camped out overnight, and cooked our own supper over the camp fire. It was corned beef hash, made with beans, Smash instant mashed potato and tinned corned beef. As this culinary delight cooked to perfection,  crane flies came from miles around to check on progress. Lots of them landed in it, and we were pulling them out as fast as we could, usually leaving a leg or two behind. Most of us went without supper, because we couldn’t bear the thought of eating Daddy Long Legs along with the corned beef hash.

Things could only get worse, and they did when we asked where the toilets were. Apparently, they were all around us! These days, when Nature calls I answer the call wherever and whenever, but my 14 year old bladder was much more robust than the 63 year old version, so I announced that I’d wait until I could go to a proper toilet, thank you very much. About half of the girls agreed with me,  and we  cast supercilious sneers in the direction of the squatters.

17 hours later, Nature’s call had upgraded to an insistent shout, and we were still around two hours from base camp. When we came across an enormous rock – about 3 feet high and a couple of feet wide – it seemed like the ideal place to unload our excess baggage. There were 7 stalwarts who needed to ‘go,’ and although the hillside was deserted but for our happy band of hikers, we decided that the remaining 6 would look out for approaching people while everyone did what they had to do. Being of a democratic persuasion, we drew lots for the sitting order.

Not for the first time, Yours Truly was last in the queue. The other girls managed to download without incident, and I was just settling in nicely for what was going to be a protracted performance when I felt a cold draught around my nether regions. Looking around to see the source of the wind – because it certainly wasn’t me – I was horrified to see a helicopter coming in to land on the hillside. It was on the wrong side of the rock, so the two occupants had a grandstand view of me with my navy school knickers around my ankles in mid stream. 49 years on, that’s still my most embarrassing memory – and there has been plenty of competition, I can tell you!

So, as we made our way back to the Midlands, we knew nothing of the terrible disaster that had claimed 144 lives in Aberfan. My first inkling was when we got off the coach outside the school and my Mum – who was not the most demonstrative of people – threw her arms around me, hugged me fit to break my ribs and burst into tears. News reports were slow coming through, and all she – and the other parents – had heard was that there had been an accident in Wales in which a number of schoolchildren had lost their lives. So, we all got an extra special hug when we got home, because it reminded everyone – parents and children alike – of how precious life is, and how easily it can be snatched away.

There was a little bit of light relief when we got home. My Gran – who had been glued to the TV while Mum and Dad were collecting me – updated us with the latest news. ‘It’s terrible – there’s been a subsidy in Aberfan, and lots of children have been killed.’ Gran always had trouble with her words, and this 14 year old fledgling writer couldn’t resist pointing out that it was a landslip that had killed the children, not a government grant. I got a well deserved telling off for my trouble, but as it turned out, Gran’s statement  was unintentionally ironic, given that the people of Aberfan were forced to donate £150,000 from the relief fund towards making the remaining coal tips safe. It would be almost 30 years before that money was repaid.

Today, along with millions of other people, I am thinking back to that October day in 1966, when so many people lost their lives, and so many others felt for them and gave their own children an extra special hug.

Photo Credit: The History of Wales

Posted in Sandra Not In Spain
Google+