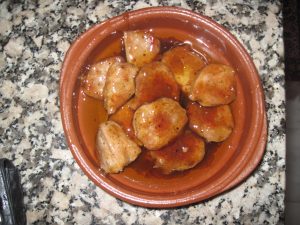 I do most of my shopping in Lidl, because I love the prices and I love the quality of most of their stuff. And some days, you get lucky and get 30% off their already low prices on fresh stuff that’s short dated. Last week, I picked up a 350 gram pork loin for €1.90 instead of €2.70. I was wondering what to do with it, so I looked in my favourite Spanish cook book – Debs Jenkins’ Spanish Village Cooking. If you don’t have it on your bookshelf, you really need to remedy that.

If you’ve been paying attention to my previous posts, you already know that Debs produced the book to raise funds for the La Murta Fiesta Committee, using over 150 simple traditional recipes submitted by the villagers. I’ve already tried Market Garden Chicken – of which more later – so I was confident I would find a great recipe for my pork loin, and I wasn’t disappointed.  This recipe, on Page 121 of the book, is so simple anyone can do it, whether you are a good cook or a Kitchen Virgin.

Obviously, I adjusted the quantities to suit my pork loin, so I pretty much halved the ingredients. It doesn’t really matter what size glass you use, as long as you use the same one for all the ingredients to keep the proportions right.

The preparation is so easy, you’ll probably think – like I did – that you missed something important. Just cut the loin into medallions, then season to your taste with the salt and pepper. Heat the oil in a large frying pan and brown the pork. Then remove the meat, add the sugar and vinegar, and heat through until the sauce changes colour. Then return the meat to the sauce and cook for a bit longer, turning occasionally to coat them in the sauce. Simples!

Because cooking is an art and not a science, I made a couple of changes. I used apple cider vinegar, since pork and apples go well together, and I cut down on the sugar a little, and replaced some of the cider vinegar with fino sherry. I was concerned it may turn out a little too sweet for our taste, as Tony and I are pretty much strangers to sugar.

The resulting dish was melt-in-the-mouth pork loin in a sweet and sour sauce that complemented it perfectly. I’ll definitely cook this again, but I’ll cut down a little more on the sugar, and up the sherry, because it was still slightly sweeter than we like, although the empty plates told their own story! I may even try it with honey instead of sugar – I think that would work too.

Debs recommends serving it with chips, but as we had it on Sunday, I served it with new potatoes boiled in their skins, cauliflower and broad beans. And the whole meal took less than 30 minutes from start to finish. What’s not to love?

StumbleUpon
0
Posted in Food and Drink in Spain
Posting....
Google+