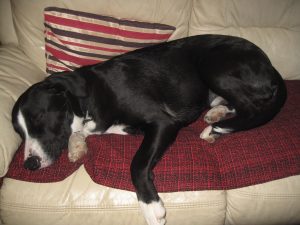 We’ve been very lucky with Paddy as far as his health goes. Aside from the routine vaccinations and being neutered to calm him down – which seems to have failed spectacularly – we’ve never had to take him to the vet. However, all that changed earlier this week.

On Friday, he developed a dicky tummy. Normally his plumbing works just fine, but on Friday, it all went pear-shaped. Actually there was no shape – it was all very liquid, if you get my drift. This has happened a couple of times before, and a day on a light diet usually puts things right within 24 hours, but not this time. Apart from the diarrhoea, he didn’t seem too bad, but when it hadn’t cleared by Monday, it was off to the vet.

Madeleine at Centro Veterinario Internacional in Los Montesinos was pretty sure that Paddy’s penchant for eating anything that would fit into his mouth – including poop bags, tissues, plant roots, cinders, gravel and aluminium foil – was responsible for his predicament. However, it was also clear from the sample she analysed that he had unwanted visitors in the form of bacteria in his gut.

So it was starvation rations, antibiotics, rehydration medication and something to soothe his delicate stomach.One thing I’ve noticed about the vets in Spain – or at least this particular vet – is that they don’t supply medication. Madeleine gave me a prescription to fill at the local farmacia. I was amazed how cheap it was – just over €6 for the two items, plus €29 for the consultation and examination, including the initial medication and some special food. In addition, I have enough medication in case Paddy has the same problem again – although I obviously wouldn’t administer it without checking with Madeleine first.

My friends with pets in the UK tell me that it’s around £40 for an initial consultation, and silly money for 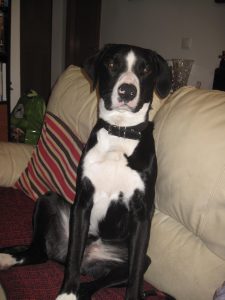 medications. These prices would seem to prove that point. Another example of Rip Off Britain, methinks. If our Spanish vets can maintain a state-of-the-art surgery, with the latest technology and still make a profit, why does it have to be so expensive to get treatment for your pets in the UK?

Paddy was back to his normal, full of beans self within 48 hours, thanks to Madeleine and her magic. If you’re in the Los Montesinos area – and even if you’re not – you can entrust your precious pets to her care, and you don’t always need an appointment. As far as Madeleine and her colleague Regina are concerned, the animals come first, and they won’t keep a poorly pet waiting for treatment.

Centro Veterinario Internacional is at the Torrevieja end of the main street in Los Montesinos. There’s plenty of free parking nearby. Call 966 721 095 for advice or to make an appointment for a consultation.