Picture this – loving the results with my new camera!

Sunlight on the rocks in Calpe – the first photo I’ve felt confident enough to enter into a competition.

I wouldn’t describe myself as a good photographer – I’m a writer first and foremost. However, when you run your own website, it helps if you can also take your own photos for it, especially if you want something different  to the run of the mill stock photos many bloggers seem to rely on. So, over the years my efforts with a camera have improved. I’ve been the proud owner of a Canon Ixus compact camera for several years now, and what I love about it is that I can slip it into a pocket, pull it out and point and get a half decent photo. Sometimes I’ve captured some stunning images, and I thought me and my trusty Canon would be together forever.

All that changed when I went to a writers’ convention in November 2017 and a friend of mine who is also an excellent photographer did a presentation about CRAP photography. That’s Clear, Relevant and Aesthetically Pleasing, if you’re wondering. A few minutes into the presentation, he startled me by saying it didn’t matter how much you spent on your camera, because – and I proudly quote:

Sandra has produced some brilliant images for her website with her little camera.

After I finished basking in my moment of glory, I began to think that maybe if I was that good, I could be even better with something a bit more up to date than my 8 year old Ixus. So when I went to England for the Santa Run, I decided that Tony was going to buy me a new camera for Christmas, and I’d tell him about it when I got back to Spain. 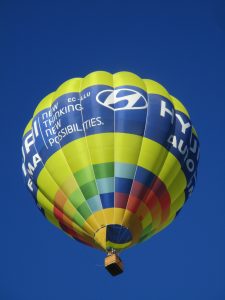 Testing the zoom lens – this balloon was hundreds of feet in the sky, and I was on the ground!

I snagged a good deal on a Canon Ixus 185 compact camera, in my favourite clour – red. However, I was a bit disappointed with the initial results – most of the photos were either out of focus, too dark, or both. In the last 8 years, technology has moved on so much that even a ‘point and shoot’ camera needs getting used to before you can get decent images, and once I got to know my camera, I was delighted with the results.

The great thing is there are about 20 zoom positions, as opposed to the two on the old camera. This zoom is much more stable too, so you don’t have to stand as still as a statue or use a tripod to get excellent close up results. I’ve become more experimental with angles and individual flowers, leaves and stuff as a result, and I’m taking the kind of photos I’ve always admired, but never imagined I could achieve myself – especially with a basic compact camera and no special lenses.

I’m so confident with my photography skills these days, I’ve done something I never thought I’d do in my life. No, not that – this is a family-friendly blog, thank you very much! At the grand old age of 65 and three-quarters, I’ve entered a photography competition with not one, but three photos. Astoundingly, the one of sunlight on the rocks in Calpe at the top of the page came first, and I won a beautiful canvas print of the photo. To say I was astounded is an understatement – there were many photos more deserving of the top prize than mine, but hey, I’m not complaining! 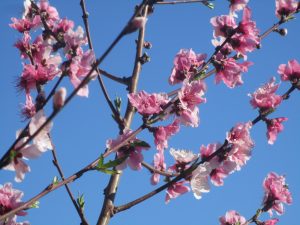 Closer to home, this is the nectarine blossom in our garden. An experiment with camera angles that paid off nicely.

These days, people seem to prefer to take photos with phones and tablets, but I’m an old fashioned girl who thinks cameras take the best photos, as long as they’re idiot-proof. I’m really pleased with my new camera, and I’d recommend it to anyone who wants an easy to use camera that they can just slip in a pocket, point and shoot. It’s got a fairly long battery life once it’s charged up, so I can easily get 400 or more photos from a single charge, which is great when you’re attending a special, annual event like the Benidorm Expats Parade. Last year, my old Ixus flagged after 300 pics, so I missed the priceless photo opp of the Policia Local ‘arresting’ a Brit dressed as a convict!

I think you’ll agree I’m getting some great results, and they’re getting better all the time. Maybe I’ll come across you while I’m out and about with my shiny new camera. If you see a red camera pointing at you, with me on the other end of it, give me your most dazzling smile, and remember to say ‘cheese’ – or maybe that should be ‘queso.’ We are in Spain, after all!

2 Responses to Picture this – loving the results with my new camera!