Pick on someone your own size, Gizmo! 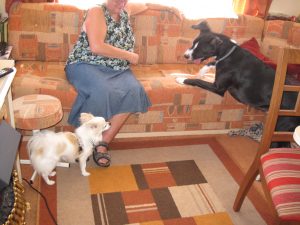 Let the games begin! I must apologise for the picture quality, but it all happened pretty quick!

Paddy loves people, and he loves other dogs – well, most of them, anyway – so when I told him his Aunty Glenys was coming to see him and bringing her Chihuahua/ Papillon cross Gizmo, he was over the moon. I wasn’t so sure, because Gizmo weighs just over 3 kilos, while Paddy tips the scales at 33 kilos, and counting. And he’s not very dainty at all, so I had visions of scraping up flattened Gizmo from the carpet. However, Glenys said she wasn’t worried about Gizmo, she was more worried about Paddy, and it turns out she was right.

From the get-go, Paddy had the advantage. He’s bigger, and he barks louder, but Glenys and I being the soppy female dog lovers we are wanted to share the love, so when Paddy tried to eat Gizmo before he even came through the door, we decided to take them both down to the dog exercise field to sort themselves out. And sort themselves out they did – or rather, Gizmo sorted Paddy out. Paddy may have got into the field first, because he knows where he’s going, but Gizmo told him in no uncertain terms that he was in his spot. In fact anywhere Paddy happened to be turned out to be Gizmo’s spot. Wherever Paddy laid his hat, or more accurately parked his bum or legs, Gizmo bit them.

Gizmo might be small, but he has about 12 months on Paddy, and my boy being good mannered, and having respect

for his elders, let him dictate the pace in the field. And that’s where he 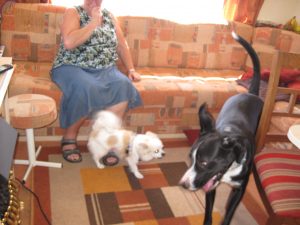 Mummy, keep that mad dog away from me! Tell him to pick on somebody his own size!

made the fatal error, because when we got back, Gizmo played his advantage. Every time Paddy went near him, it wasn’t so much happy clappy as snappy snarly. My gentle giant tried to find refuge on the bench seats in the caravan, which he erroneously assumed were beyond the reach of the Mighty Midget. What a mistake-a to make-a, because Gizmo, fuelled with – well not testosterone, because, like Paddy, he’d been done, but he was definitely fuelled with something – just leaped up there after him. This was a dog on a wire.

Paddy looked desperately to his Mummy for protection, reassurance, and love. And what did he get? Hysterical laughter, because watching 3 kilos pull the strings of 33 kilos was the funniest thing I’ve seen in years. I did try to be a responsible Puppy Mummy, and told Gizmo to pick on somebody his own size, but I don’t think Paddy appreciated it. Most of the afternoon passed in the same vein, and Paddy tried to show his rebellious spirit by drinking Gizmo’s water, which just earned him another nip on the ankles and necessitated another leap onto the bench seat. 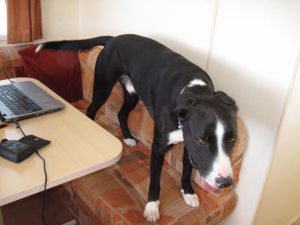 Has he gone yet?

Eventually, both dogs were exhausted and flaked out – Paddy on the bench seat and Gizmo on the floor. And they even managed to eat supper without incident. Maybe there is a blossoming friendship after all. Or maybe not. We shall soon know, anyway.

We’re going to have a rerun on Thursday, when we head off in the motor homes for a rally at the Three Counties Showground in Malvern, Worcestershire. Paddy and Gizmo will spend 5 days together. I haven’t told Paddy yet – I’m keeping it as a surprise. Or shock, as the case may be.