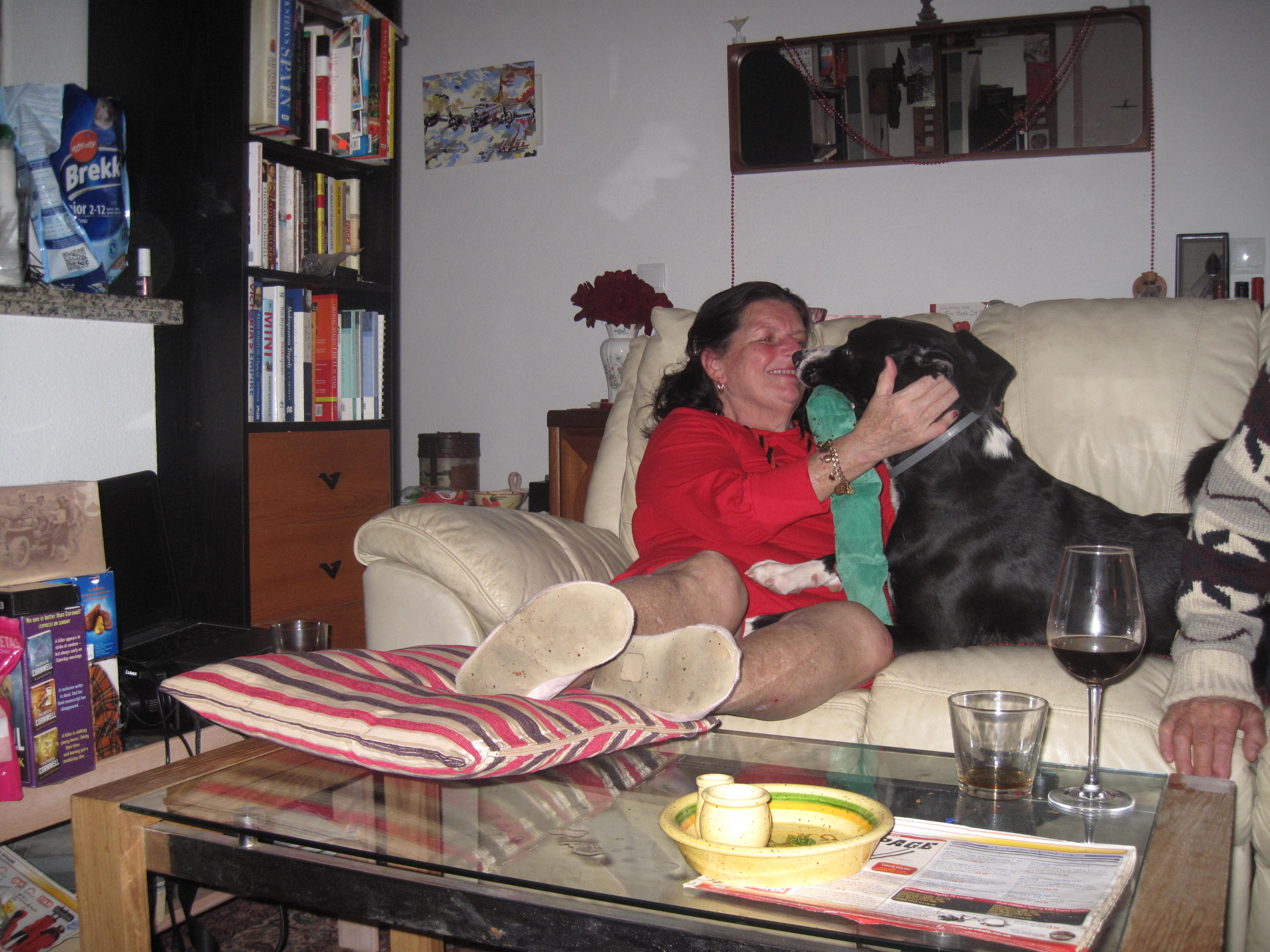 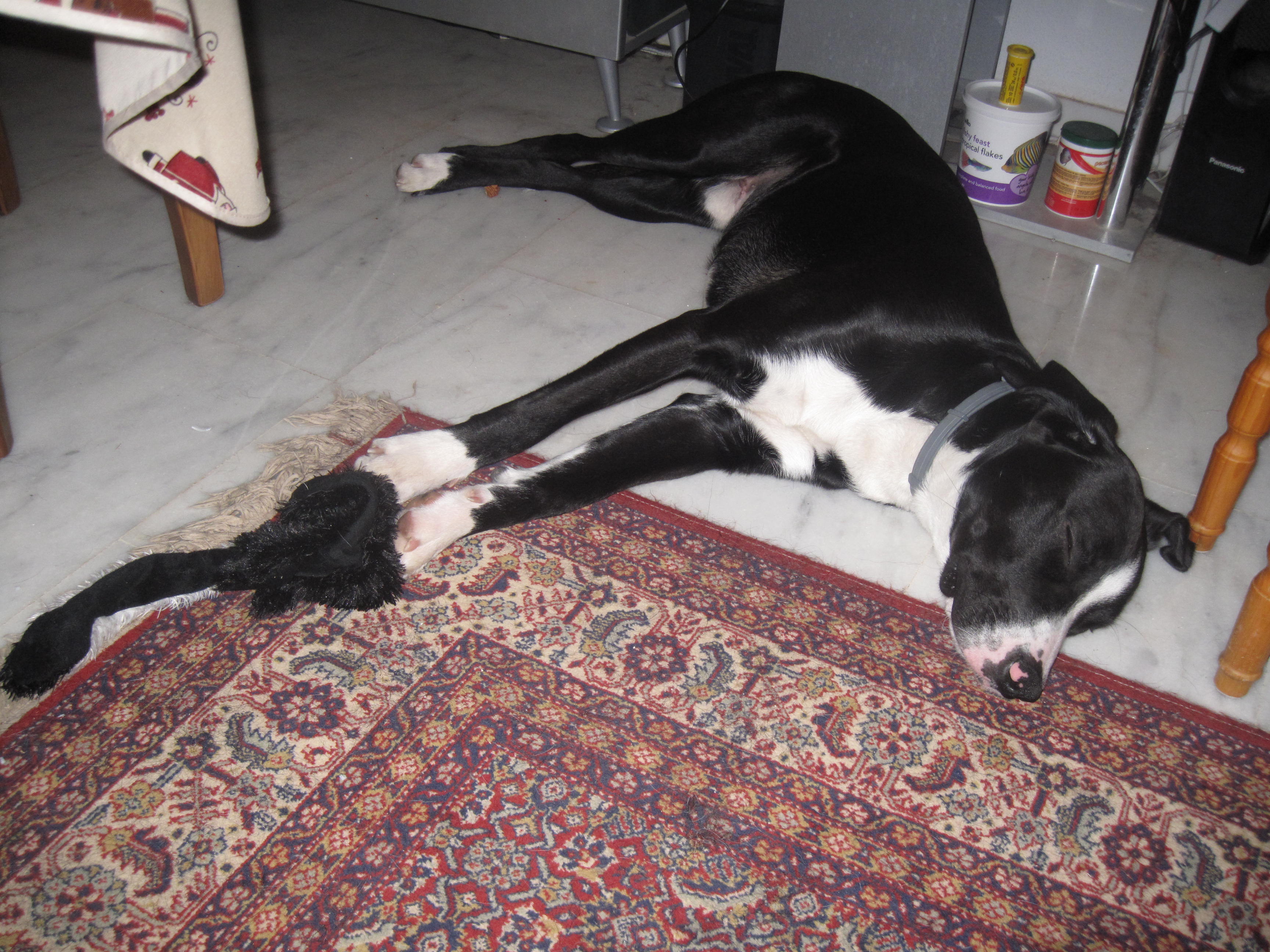 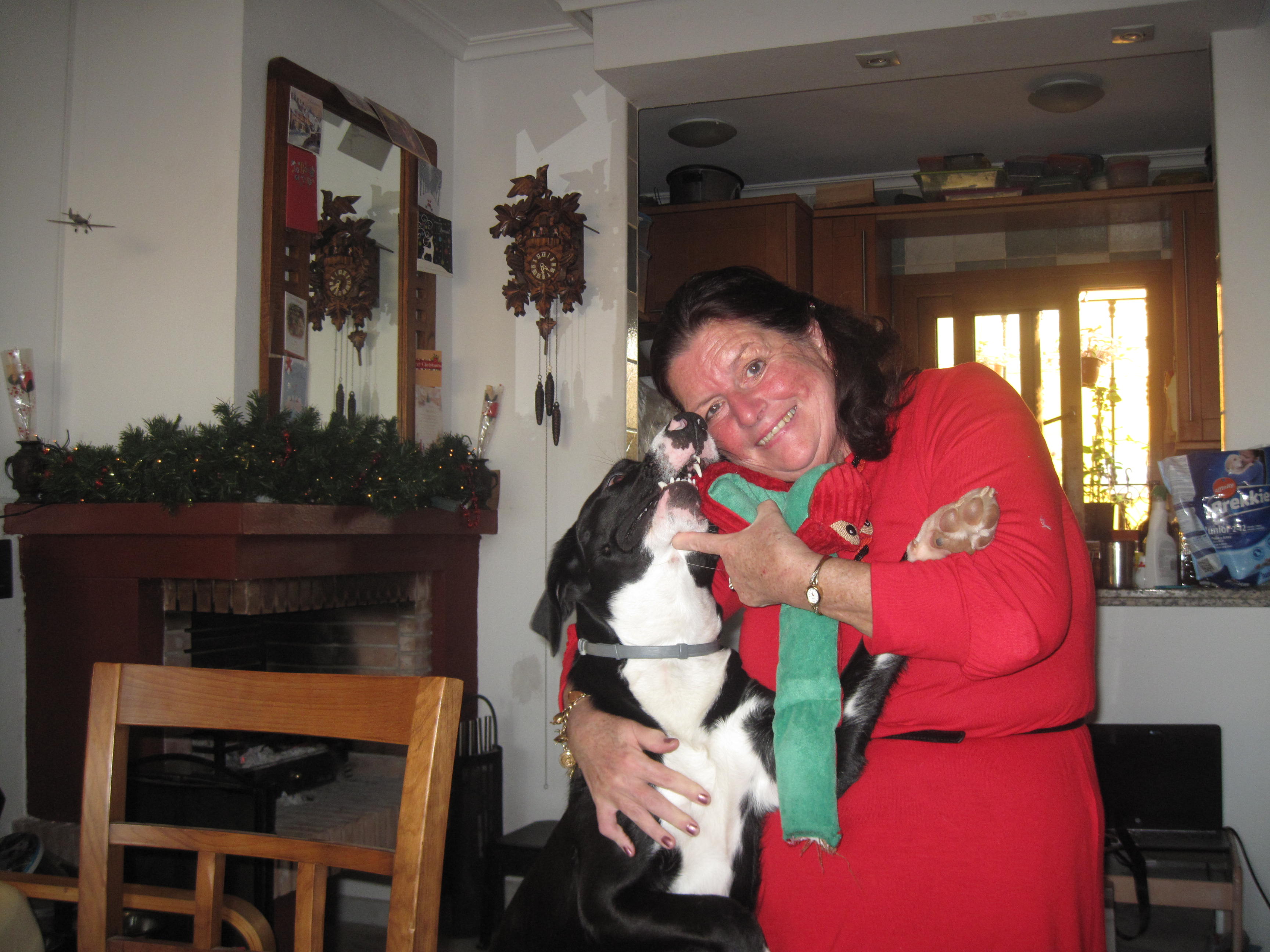 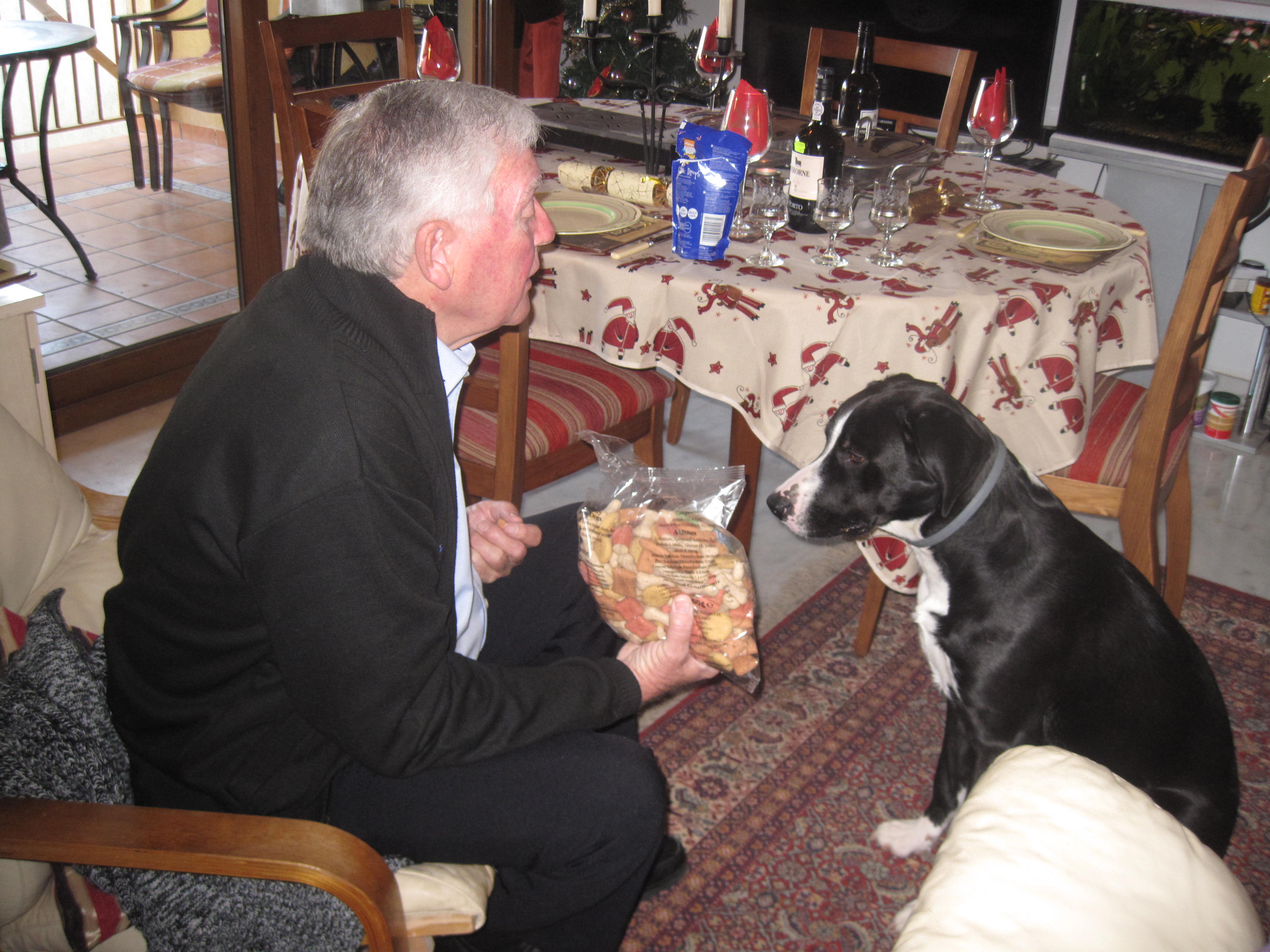 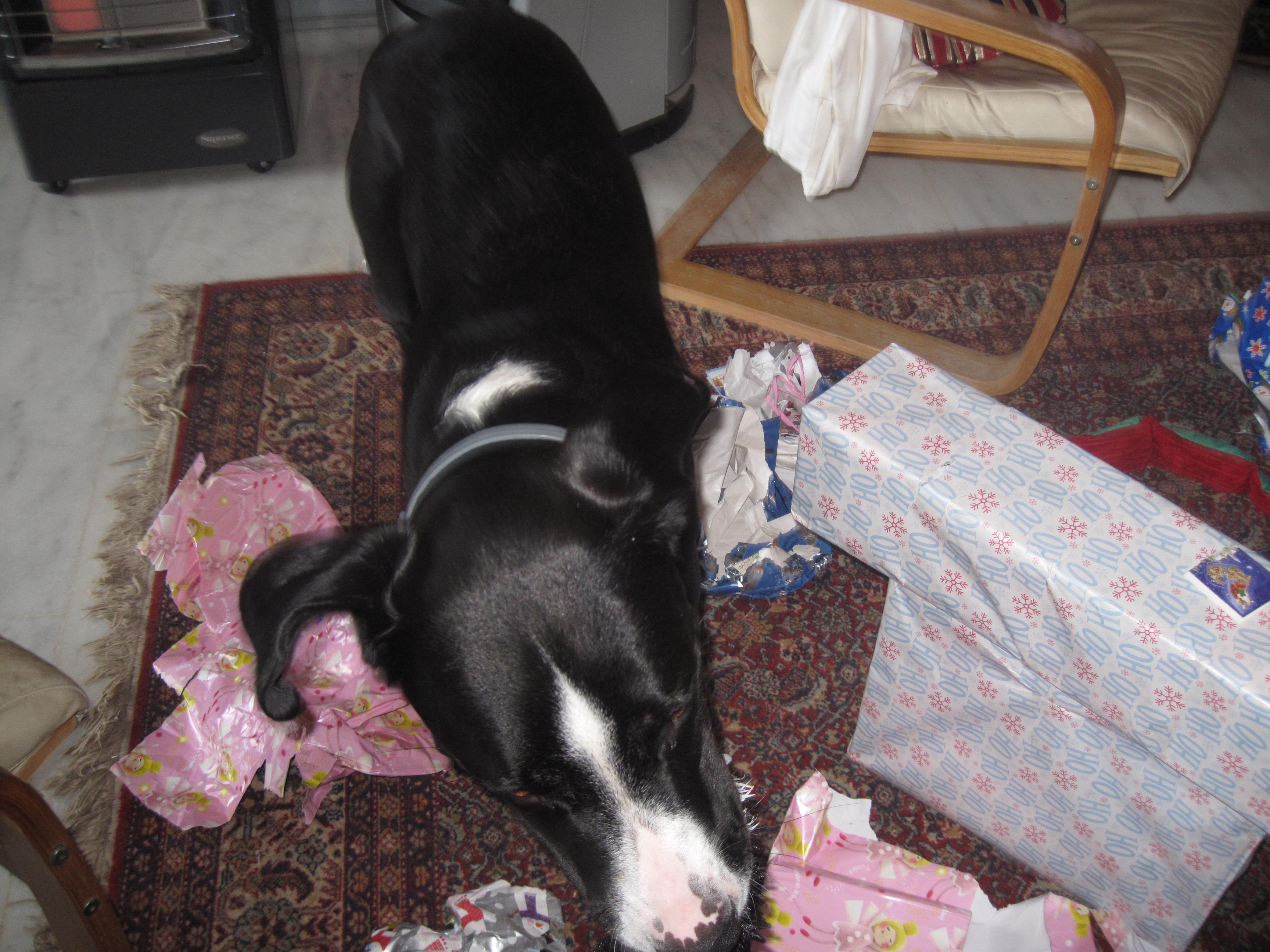 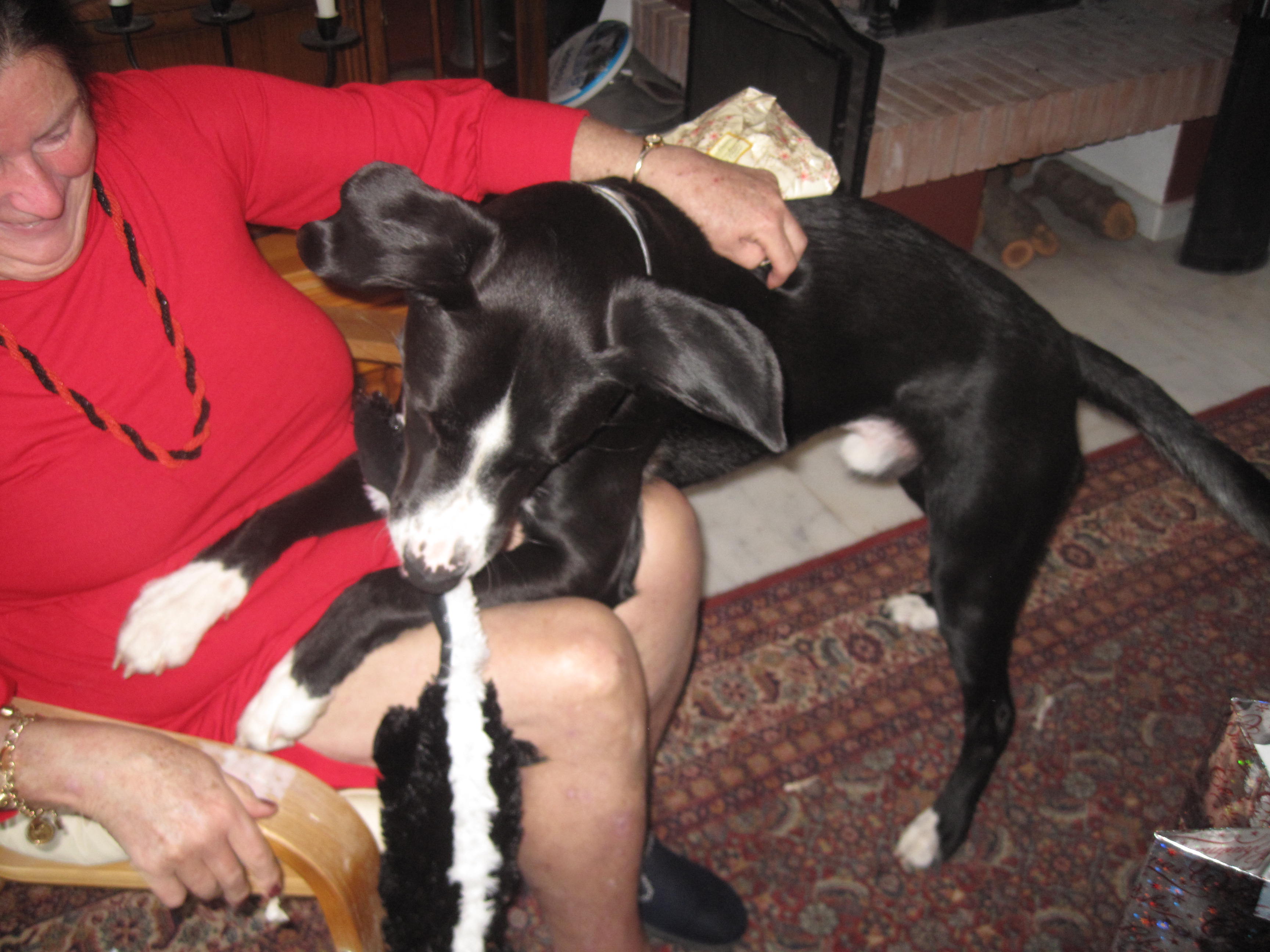 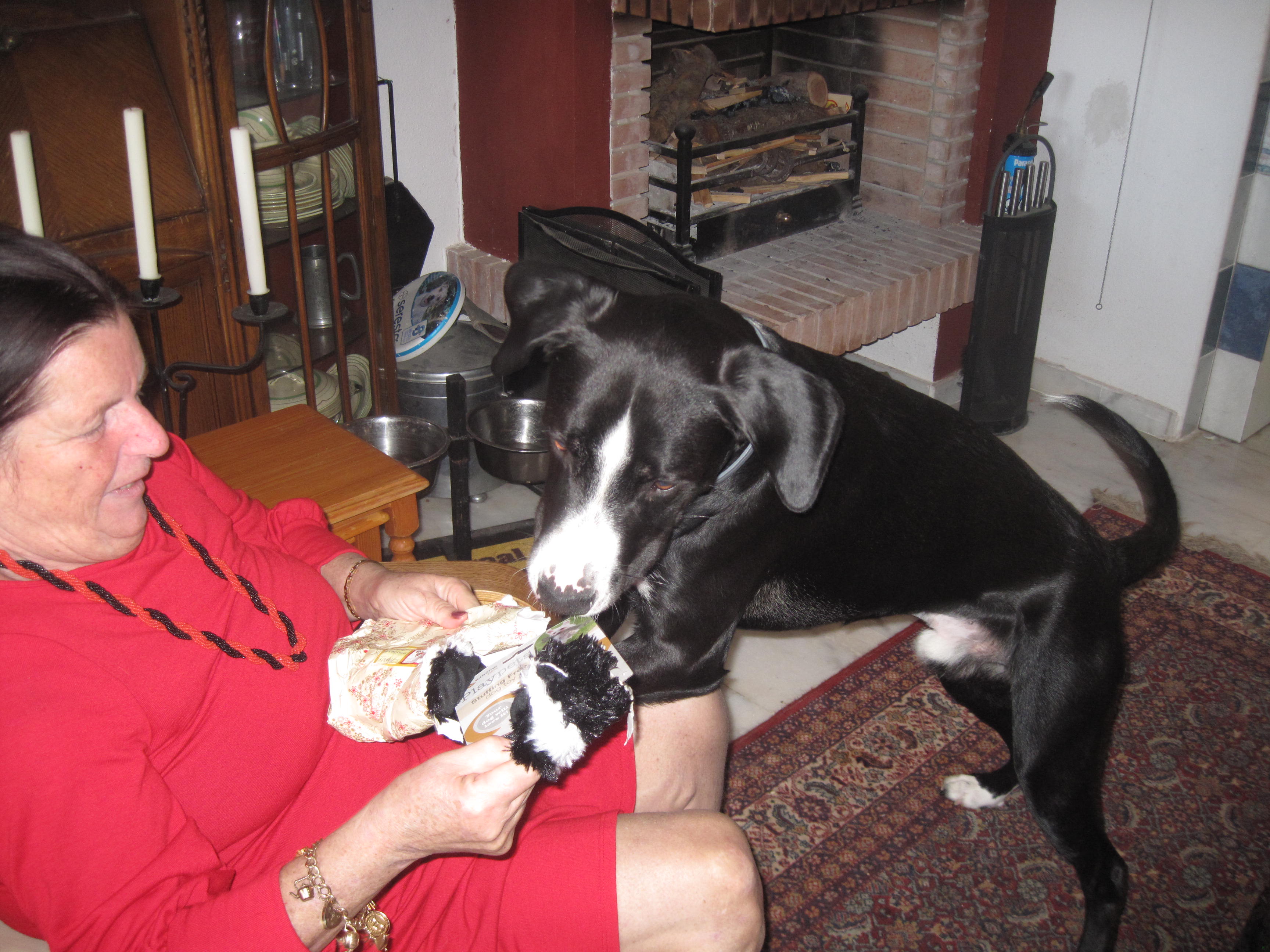 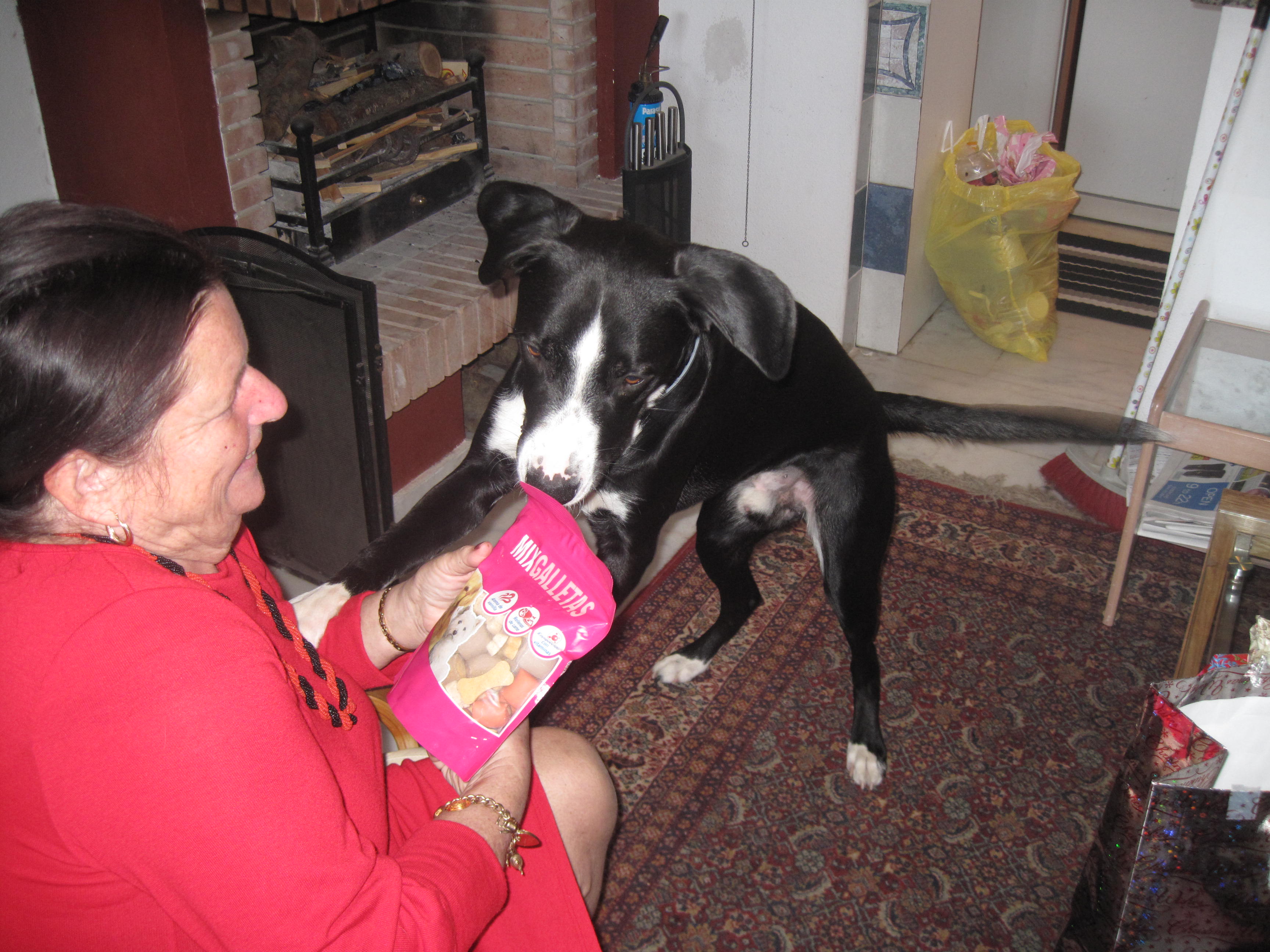 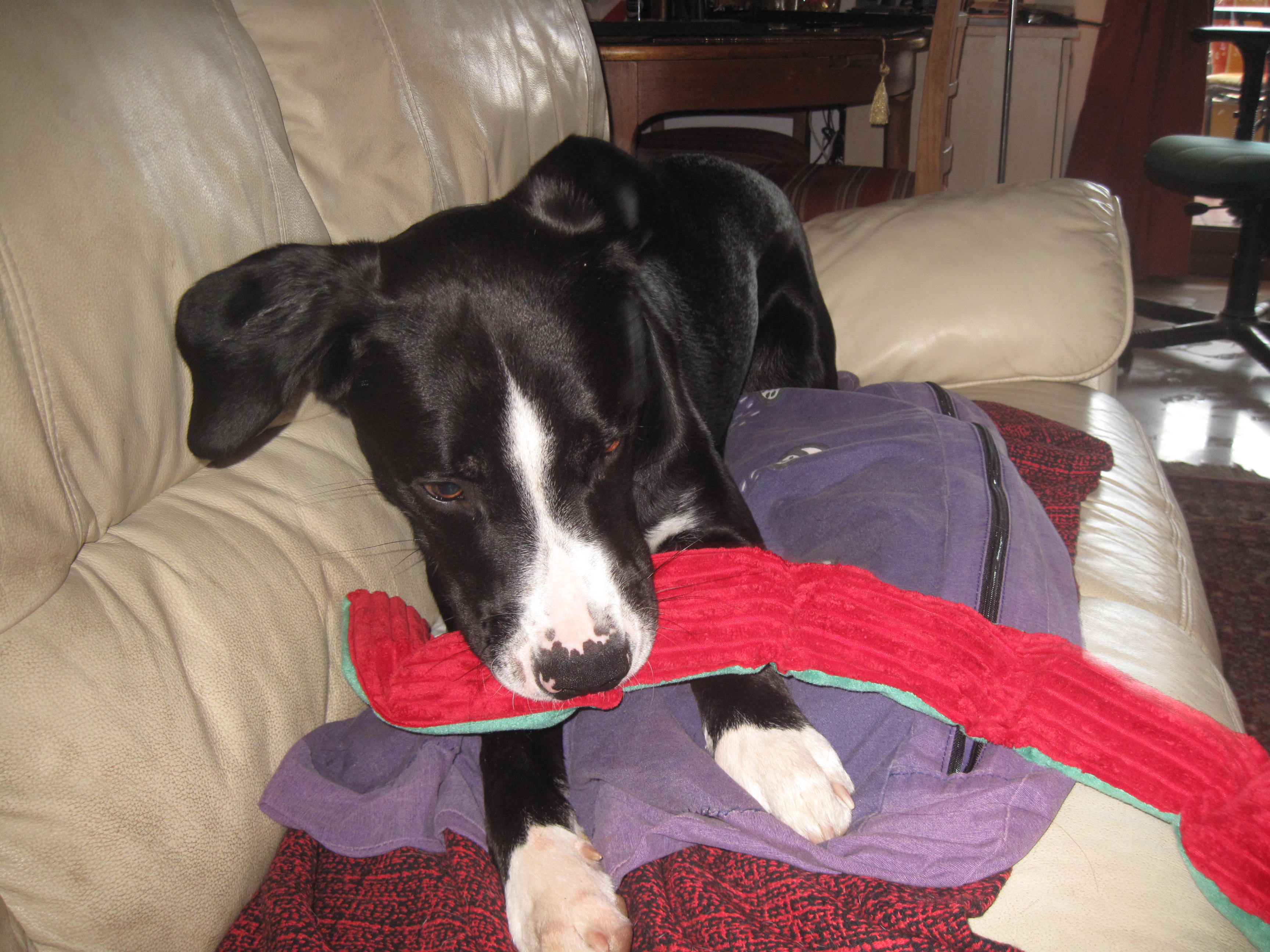 I have to say I’ve been looking forward to giving Paddy his Christmas presents, and seeing how he coped with the Big Day. To be honest, I wasn’t really expecting much. After all, you don’t imagine an 11 month old puppy getting excited at the thought of Santa coming do you?  And Paddy still wasn’t 100% back to normal following his operation. But he’s an intelligent little boy – or rather big boy – and he does pick up on anything different, so I was hoping we’d enjoy our first Christmas with Paddy.

The first hour or so was spent with his backside welded to the kitchen floor, as he watched me prepare the food for cooking, and hoped against hope there’s be some fallout from the work surface. (There wasn’t – hard luck Paddy. There’s a reason I don’t start on the cava until everything is safely under way).

Then it was time to open the presents. Usually, they sit under the tree, but usually, we didn’t have a dog with destructive tendencies, so this year they stayed safely in the spare bedroom until opening time. Of course, Paddy got to open the first present – a red and green squeaky rattlesnake from Aunty Glenys in Plymouth. We could tell he loved it from the way he threw it up in the air and caught it several times before getting down to the serious business of making each of the 5 segments squeak as loudly as possible. Got a feeling we might have to ‘lose’ this one for a while, if only to save our sanity, but Paddy loves it – just as Aunty Glenys knew he would.

The next Paddy Present was a pack of fancy dog treats from Aunty Bev and Uncle Alex, who are spending Christmas and New Year in Jersey. So of course, there had to be a break in proceedings while he checked they were suitable for consumption. Even though it was Christmas though,  he still sat down and did the ‘Paw, Paddy, now other paw’ routine we always have for treats. He’s a good mannered little boy – and a bit of a show off into the bargain!

Next up was our present – and I went for the colour-co-ordinated option. I bought him a furry skunk, which matched his coat perfectly. That was a big hit too – later in the day, when he needed a nap, his skunk was the companion of choice. While Paddy tried to decide whether he wanted to play with the rattlesnake or the skunk – and tried unsuccessfully to carry both around at the same time – we opened our own presents.

Normally, I’m well organised for the Present Undressing. I have a bag ready so the discarded wrappings go straight into it, and don’t clutter the floor. However, this year I was so keen to see Paddy open his presents I forgot all about it – and I’m so glad I did! Just like many little kids, Paddy decided that the wrapping paper looked even more fun that the presents, so we had a chaotic interlude while he chucked it, chased it and chewed it. We just sat back and enjoyed the show – after retiring the gifts to a safe distance, of course!

When our friends Jim and Joan arrived for lunch, there were more Paddy Presents, in the form of his favourite biscuits, along with some doggy choc drops. And Paddy helped Uncle Jim to unpack them so he could sample them. Not too many though – we didn’t want to spoil his lunch! Like us, Paddy sat down to Aberdeen Angus beef, turkey crown and smoked gammon. Unlike us, his Christmas dinner vanished in about two minutes flat.

We did try to include him in the Ceremony of the Crackers, but he ran off with his and chewed it up. Not only that, he took exception to our hats as well, and removed them. Obviously he didn’t want us to look like idiots in the photos! Then it was off for a walk with Uncle Jim. I have to say I was a bit miffed that he asked Uncle Jim to take him for his Christmas Day walk, but then again, I’m here all the time, and it did give me chance to relax with a large Bailey’s over ice.

After his walk, Paddy settled down for a nap with Skunk. Little man you’ve had a busy day – but a very enjoyable one, and we were all so pleased to be part of Paddy’s First Christmas!