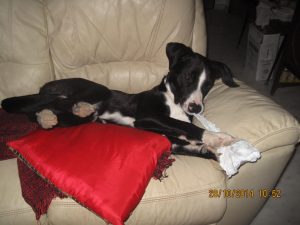 We’ve been pretty lucky with Paddy. He’s not really destructive, but he does have a penchant for paper, and he’ll purloin it given half a chance. One of his favourite tricks – and one he’s perfected over the months – is taking tissues from pockets, but he’s also happy with serviettes if he can get his paws on them.

Soon after we brought him home, I had quite a scare. We’d had friends around for supper, and we’d had to retrieve serviettes from Paddy’s jaws on more than one occasion. Next morning I was inspecting Paddy’s downloads for signs of anything untoward. I’ve got over that now, but I was a very anxious Puppy Mummy in the early days. What I saw sent me scuttling indoors to phone the vet. There was blood in that there poop, and blood in poop is Not a Good Thing, especially for a 9 week old puppy.

Luckily, in my haste to get to the phone, I stepped on something. It was a red serviette – or rather part of one. Suddenly the Mystery of the Bloody Doggy Doings was solved – Paddy the Phantom Paper Pincher had struck again.I gave the rest of the red serviettes to my friend and bought yellow ones, but obviously Paddy didn’t like the taste, because from then on he didn’t eat the tissues and serviettes he pinched, he just ripped them to shreds.

We often call him the Artful Dodger, as he can whip a tissue from a pocket without anyone realising until they see the shredded paper at their 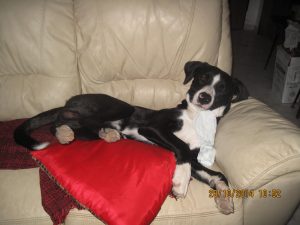 Look what I just snaffled from Daddy’s pocket while he wasn’t looking!

feet. But he’s getting more brazen now – if there isn’t a corner of tissue poking out of the pocket, he’ll come up to you, tail a-wagging and lean into your side. As you stroke him, he nuzzles into you, and you think ‘Aaah – what a cute, affectionate boy he is.’ But you’re wrong, he’s pure evil, and he’s intent on taking your tissue and tearing it to shreds. He’s perfected the art of easing it up from the depths of the deepest pocket, usually with his nose but sometimes with his teeth.

A friend of ours thought she could best him by stuffing her tissue down her ample bosom, but Paddy managed to work his way in there too. Truth be told, I’m not sure who enjoyed the experience the most. Let’s just say it happened more than once, and protect the identity of the guilty party, shall we?

Paddy’s preferred routine is for you to chase him around the house and garden, vainly trying to rescue your tissue. He likes it even better if you offer him one of his favourite treats in return for your now very soggy tissue. Because you’ve fallen for the puppy eyes and the cute way he shoves his bum in the air in his ‘chase me’ mode, you’ll probably cave in and give him a treat, or even two or three. But I am impervious to those charms. He gets no treat-tissue swap from me. Well, not every time, anyway!