Paddy and the dreaded ‘C’ word 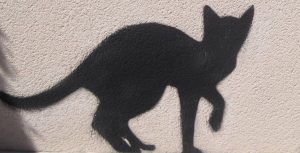 The first feline not to run when Paddy chased it!

According to various statistics, dogs can recognise and understand at least 100 words and phrases, while dogs of above average intelligence have a potential vocabulary of around 200 – 400 words. There’s even a Border Collie called Chaser in North Carolina who has been taught over 1,000 words, so she must be the canine equivalent of Shakespeare.

Paddy clearly knows lots of words and phrases. If I say ‘Does Paddy want to play?’ he’ll go and pick up his rope toy so that I can throw it up and down the tiled area outside our apartment and he can do around 50 kilometers an hour, chasing it and shaking it. I only say ‘walk’ when I’m actually ready to put the leash on, or there’s a flurry of activity and stuff gets knocked over as he bounces around the furniture. If I say to Tony ‘I’m going to take him out now,’ – even without mentioning his name, Paddy runs over to where his harness and leash are kept and sits looking at me expectantly.

However, there is one word that is guaranteed to turn my loveable boy into a lean, mean, killing machine, and he finds it particularly offensive. So do we – so much so that this particular word is banned in our house. It has 4 letters and begins with a ‘C,’ and we all hate to hear it. That word is ‘Cats.’ Wash your mind out if you thought it was something else – my clever boy is too well mannered to know rude words. 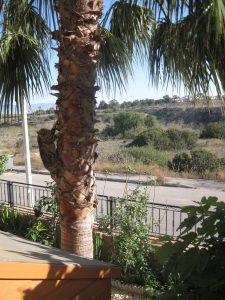 The puddy tat up the tree and safe for the moment!

Ever since the first time I took him for a walk as a tiny puppy, and he saw a black cat at the top of our street, he’s taken a dislike to them. And more than two years down the line, he still looks up the street every time we go out to see if that particular pussy cat has the temerity to come within 100 yards of his presence. If he sees cats on the TV, he rushes around the back to try and catch them. And if he’s out walking and spots a cat before me, I’m almost guaranteed to end up on the deck. I’ve been pulled into hedges, bushes and walls, and I’ve got the scars to prove it. It’s not just me either – our friend Larry got pulled through two bushes and a hedge when he was walking Paddy around a camp site in Devon. When Paddy spots a cat, he develops the speed of a racing car and the strength of 10 men.

At least three times, he’s chased cats up trees, and can’t be persuaded to come away and let puss make good her escape. Whether it’s the palm trees in our garden or on  camp sites, or the fir trees around La Ermita in Algorfa, Paddy can be relied on to jump almost as high as the cat has climbed in pursuit of this most hated of species. Luckily for the cats, he hasn’t yet managed to catch one.

I boasted that Paddy is pretty clever because he knows so many words, but the other day he demonstrated that maybe he’s not quite the sharpest tool in the shed after all. We were heading back home from an enjoyable walk in the orange groves, followed by a well-earned glass of wine at Bar La Vista, when I spotted a friend and went over to speak to them. Paddy went rigid, his hackles stood on end, and he launched a volley of vicious barking and lunged forward. If I hadn’t bought him a Walk Easy harness a few days previously, which gave me more control over him, I’d have ended up in the fountain as he went in hot pursuit of the black cat which was arching its back at him and fearlessly standing its ground.

I let go of the leash, and let Paddy teach this insolent feline a lesson it would never forget. Cruelty to animals? Not really – the black cat in 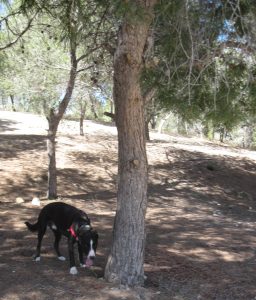 question was painted on the wall of the Black Cat Ink Tattoo Studio! Okay, it looks mighty realistic, but only a cat-fixated pup like Paddy could have possibly thought it might be a real cat. He raced over, tried to take a bite out of the feckless feline who didn’t run at his approach, and only succeeded in scraping his teeth on the wall. Bewildered, he ran around the side of the building to see where pussy had gone to hide. It took my friend and I 10 minutes to convince him that this cat wasn’t going to come back and persuade him that it was time to go home. In the words of the cartoon song, Paddy tawt he taw a puddy tat, and he wasn’t leaving until he was sure the cat had left the building.

So, as you can see, there’s a ‘C’ word that’s totally unacceptable at Piddock Place – particularly to Paddy. Someone suggested that we should bring a kitten into the household, so that Paddy could get used to being around cats. It sounds good in theory, but I’d be too worried that Puss would be Paddy’s main course. You see, he really doesn’t like cats, and I’m pretty sure he could eat a whole one if he put his mind to it!