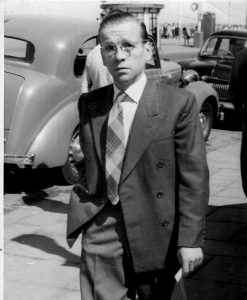 Today – 21 November – resonates with me for two reasons. First of all, it’s the anniversary of the Birmingham Pub Bombings in 1974. If you don’t remember them, there’s a powerful run down of the day’s events here. Tragic as that was – 21 people lost their lives and another 182 were injured – 21 November 1968 was even worse for me. It was the day my father died, suddenly and cruelly at the age of just 49.

If you love your parents and then you lose them, it’s devastating, but for me, aged 16, it was doubly devastating. My father had led a charmed life in some ways. When war broke out in 1939, he volunteered for service, but he was so short sighted he was turned down, at the age of just 20. Less than two years later, however, he was pulled in, and promptly captured on Crete in 1941. For him, the war was over – but it wasn’t really.

Although Dad was treated much better than the Japanese prisoners of war, he came back with health problems, and in 1955, it almost cost him his life. He had to have two-thirds of his stomach removed, because it was so badly ulcerated, and he reacted badly to the surgery. He wasn’t expected to last the night, so I was taken to the Manor Hospital in Walsall, and held up to the window to see Dad for what was supposed to be the last time. In those days, children weren’t allowed on hospital wards, even when their parents were dying.

Clearly, Dad made it, and for the next few years, everything was fine. I was his little princess, even after my brother was born in 1956, and I revelled in it. Come 1967, their business was doing so well, Dad decided to treat himself to a brand new Ford Corsair. The business was doing well, but not so well that he could flash the cash. He needed to buy on hire purchase, as it was called then, and the government had recently brought in a law that if you wanted to borrow more than a certain amount, you had to have a medical. That law saved his life, because it turned out he had tuberculosis, and he would have died within months. He also had scarring on his lungs, which suggested he’d recovered from tuberculosis about 25 years before. Like I said, for him, the war was never over.

He spent six months in a sanatorium, and then another year convalescent. That time was precious to me, because Dad had time to spend with me. He always did, but when he was working in the business, that time was limited. While he was convalescent – even though I left school and took his place in the business – we spent a lot of time together.

Too much, as far as Mum was concerned. On Christmas Day 1967, Mum was doing dinner for Dad’s three brothers and his sister, and their families. As usual, all the men went to the pub, while the women cooked the dinner and the cousins played with their new toys. The men were under instructions to be home by 1.30 pm, and when there was no sign of them by 2.00 pm, Mum sent me to get them. I knew Dad had had enough – the fact that he was up on a table singing The Lonely Goatherd from his favourite musical, The Sound Of Music and yodelling like a good ‘un gave me the clue. When he shouted ‘Get my lovely daughter a Babycham,’ it was case proven. I was only 15, and too young to be drinking in licensed premises. Three Babychams later, my aunt came and dragged us all back for lunch. At the time, I didn’t know that would be our last family Christmas.

A couple of months later, I came down with a kidney infection, and it was Dad who looked after me while Mum kept the business going. He wasn’t really domesticated, but he could warm up a tin of tomato soup, make a cup of tea and mix up a glass of Robinson’s Barley Water, and that’s all I needed at the time, so he was my hero.

A few months later, he defended me when my Gran said my mini skirt was indecent. He thought so too, but he wasn’t going to let his mother call his darling daughter indecent, so he said I looked lovely in it. I must have, too, because I snagged myself a rather nice boyfriend that night, and lined up a reserve.

On 20 November 1968, he went for a check up with his specialist. He got a thorough going over and was pronounced 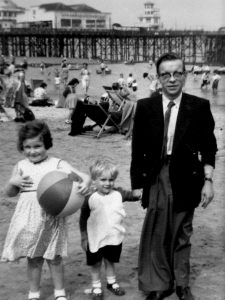 Me and my brother with Dad, Blackpool 1957

almost fit to return to the family business. So that night, he felt justified in going out with our friends and neighbours to celebrate. When he woke up with a blinding headache next day, we put it down to a hangover. Mum went to get him tea and aspirins, but it was already too late. Dad was in the grip of a brain haemhorrage, and before the kettle had boiled, he was dead. He was 49 years and 9 months old, and he’d been given a clean bill of health less than 24 hours ago. That only served to double the shock effect.

I don’t do regrets, but I am sorry my Dad never saw me get married and give birth to his grandchildren. I’m not sorry he wasn’t there when my two marriages ended, or when my health took a nose dive when I was in my early forties.  However, I’d have loved it if he’d have been there to see me graduate with a First in English and History at the age of 49 – the same age he was when he died – and then make a new career as a writer after moving to Spain in 2008.

Dad really came back into my life in a way I could never have imagined when I developed my psychic powers and began to give readings and demonstrations. He’s a kind of spiritual gatekeeper, for want of a better description, and he is always there to offer advice and encouragement, for myself and for others. It’s a comfort to know that he and other loved ones live on in Spirit, and that we’ll all be together again one day. It doesn’t quite make up for being deprived of his physical presence for all of my adult life, but it’s a great comfort to have seen him, and Mum and Gran, looking after the twins I miscarried, and my beautiful dog Paddy, who passed to Spirit in 2019. Love never dies, it’s always there for us when we need it.

Posted in Sandra Not In Spain
Google+