Oh dear, what a cat-astrophe! 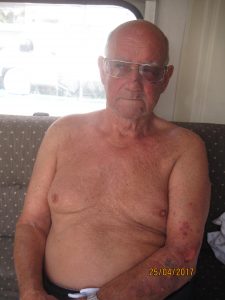 Tony, two days after the cat-astrophe and still looking bruised and battered.

We were so looking forward to coming to Camping Playa Mazarron at Bolnuevo. It ticks all the boxes – bars and shops within easy walking distance, so Tony can join in with everything, right on the beach, for sunbathing purposes. But the real icing on the cake is the dog friendly beach, right outside the camp site. With the sea, sand and the lovely fresh water stream to go at, and lots of canine company, Paddy’s excessive energy would be contained, and even exhausted, wouldn’t it? Well – maybe.

On arrival day – Sunday, a day ahead of the rally start, but necessary to hear the great live music at The Blues House – I took Paddy for two good long sessions on the Playa Canina. He met some lovely dogs, ran his heart out, and fetched sticks and stones out of the stream and the sea. And he slept the sleep of the totally shattered, never moving from when we got the bed out until Tony and I needed wee wees at about 9.30 on Monday morning. One slight blot on the landscape was that on Sunday evening, Paddy had spotted a tortoiseshell cat on the steps of a neighbouring motor home. Normally, we check with people parked up around us for the cat situation, because as regular readers know, Paddy absolutely detests cats. Chris and Cliff had assured us that they were totally catless, but the pussycat that Paddy thought he saw – and indeed did see – was a local cat that they’d helped look after last year when she had kittens, and she’d come back to thank them, and scrounge a few titbits.

Monday dawned bright and sunny, and I persuaded Tony to accompany me to the Playa Canina. On the way, we spotted one or two of the camp site’s feral cats. Luckily we spotted them a split second before Paddy did, and we managed to remain in a vertical position. It did occasion a few ‘Can’t you control your dog’ moments from Tony, but the trip went really well. Until we got back to base. I had removed Paddy’s lead and harness, and was about to hook him up to the old elasticated tow rope we use as a tether on camp sites when he spotted the grateful tortoiseshell cat at the same time as me. I asked Tony to help me hold him while I clipped the rope to his collar, and he did. Mission accomplished – Paddy is secured, and can’t catch the cat, because the tow rope won’t stretch that far.

We knew that, but with Paddy’s pathological hatred of anything feline within sight, he either hadn’t worked out the logistics, or decided he was going for it anyway. Tony being 83 years young, his reflexes aren’t as sharp as they were, and he failed to see the potential for disaster that I, in a Mystic Meg Moment of clarity, was only too aware of. He should have got out of the way as soon as the tow rope was in place, like I did. Paddy launched himself at the tantalising tortoiseshell, in the process wrapping the elasticated tow rope around Tony’s ankles. As the tow rope whipped his ankles behind him, Tony put out his left arm in a futile attempt to avoid imminent disaster. While the arm hit the gravel ahead of his face, saving the ruination of his film star good looks – or at least that’s what he calls them – there was an inevitable coming together of glasses and gravel. It all resulted in a bit of a bloodbath, not helped by the fact that Tony is on warfarin to keep his atrial fibrilation under control.

Being the caring lot they are, our fellow motorcaravanners converged from all directions. And because most of them are retired, with various life skills and professional qualifications to their names, we had somebody qualified to administer first aid when Tony – predictably – failed to follow sensible advice and head for the nearest hospital. Paul Spear happened to have a handy syringe – don’t ask why – and with the help of some iodine and water, he managed to flush out the half a ton of gravel that had embedded itself in the wounds. His wife Penny – justifiably proud of her husband’s felicitous administrations – suggested we should rename him Florence. This didn’t go down to well, and a domestic was narrowly avoided since Paul’s main consideration was the wellbeing of his patient. I did try to pour oil on the troubled waters of marital harmony by saying he couldn’t be another Florence Nightingale because he didn’t have the legs for the stockings, but apparently it was the wrong thing to say.

With Tony patched up and resting, we thought the drama was over, but what a mistake-a to make-a! Next thing we knew, Paddy – who had been moved out of sight range of the tantalising tortoiseshell – was going ballistic at a black cat that had the temerity to come within half a mile of us. Said black cat was followed by a Dutch couple with a washing up bowl in their hands. It was making noises, which is pretty advanced, even for a washing up bowl from the local Chinese bazaar. It turned out that the cat had decided to give birth to her kittens in the Dutch couple’s motor home, and then gone for a bit of rest and recouperation while the babies were sleeping. The new mother couldn’t have imagined what she had let herself in for by heading into Paddy’s territory, but he let her have it with both barrels, and no way was she passing this way again, even to get back to her babies. However, the Dutch couple were determined to facilitate a reconciliation, hence the tour of the camp site with the washing up bowl. We suggested maybe they needed to take the kittens back to their motor home and let Mama Cat find them.

What was intended to be – in the words of our hosts Geoff and Brenda Balshaw – ‘a relaxing rally, with stuff to do, and also plenty of chances for peace, quiet, and exploration’ was rapidly descending into a 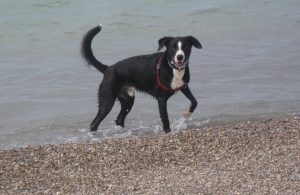 Paddy enjoying the rally – which is more than Tony is doing!

disaster of apocalyptic proportions, so we had to do something to persuade Paddy that informing the whole camp site – all 650 pitches – that there was a cat nearby was not a good idea. He’s not keen on water applied directly to his person, although he’ll happily frolic in the sea, the salt lakes near us and any other water that is fairly predictable. Someone suggested that a spray bottle, filled with water and aimed between the eyes every time he barked at a cat might restore peace and tranquility, so I trotted off to the local Chinese bazaar and bought the instrument of torture. And it’s working. Two days later, at the sight of a cat, he just growls, I pick up the spray bottle, and he cowers. I’m not proud of putting him through that, but needs must. And if any of my readers have a husband they want rid of, I’m happy to rent Paddy out, minus the spray bottle. As long as there are plenty of cats where you live, and there are no first aiders on hand. Rates subject to negotiation.

4 Responses to Oh dear, what a cat-astrophe!