New cushions for Christmas? Maybe not! 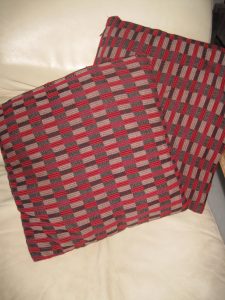 Red cushions – who would think they could cause such hilarity?

Very often, people decide to buy something new for the home at Christmas. Sometimes it’s a new sofa or carpet, or it may just be something small but integral to the room, to give the place a mini makeover for the festivities.

A couple of years ago, my friend – who shall remain anonymous to spare her blushes – decided she would buy some new cushions for Christmas. As we were going to Lemon Tree Road Market on the Sunday before the Big Day, we decided that was a good place to start.

Like all good expats, my friend is learning Spanish, and she’s doing quite well with it now, but it took her a  while to get to grips with the basics. One trick she used if she was going for an appointment, or to buy something specific, was to work out or look up what she wanted to say, write it down on a post-it note and practice so she was pretty much word perfect. And this is what she did when we went to buy the cushions.

Her preferred phraseology was ‘Tienes cuatro cojines rojos, por favor?’ (‘Do you have 4 red cushions, please?) By the time we’d driven from Algorfa to the market, I was heartily sick of hearing it, and even asked her to change the colour, or change the number of cushions to give me a break. She looked a little hurt, and pointed out that not everyone had a natural flair for Spanish. That made me feel a bit guilty, so I silently resolved to be a more supportive friend in future.

However, when I tried to help her out at the soft furnishings stall, she obviously misread my motives and thought my offer of help was a further aspersion cast on her linguistic capabilities. In a fit of pique, she told me to leave her alone, because she was perfectly capable of buying four cushions without my help, for goodness’ sake. Well, she didn’t actually say ‘goodness’ – none of my friends do, come to think of it – but you get the drift.

I blame myself for what happened next. Normally, my friend would sneak another peak at the post-it note, just for reassurance, but she wasn’t going to do that after telling me she was fine with buying the cushions, was she? So, she marched up to the stall, and after a friendly ‘Hola,’ she made here request. ‘Tienes cuatro cojones rojos, por favor?’

She seemed genuinely taken aback when everyone within hearing distance – including me – fell about laughing. The stallholder was beside himself, because she’d just asked him if he had four red testicles! In her confusion, she’d found out the hard way that one vital letter means the difference between a nicely furnished home and a very strange focal point.

Needless to say, we went home without the cushions. A couple of days later, she bought them in Ikea in Murcia, where she could just pick up what she wanted without having to say anything at all. It’s safer that way – but boring, don’t you think?

2 Responses to New cushions for Christmas? Maybe not!