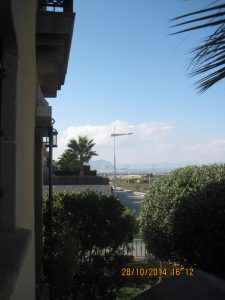 ‘My’ mountain. taken from our terrace. Not a very clear view, but still beautiful

When we first viewed our property on La Finca in July 2007, our property finder Sue opened the persianas (shutter blinds) to the patio doors on the terrace and we stepped outside to view what was soon to be our garden. While Tony was enthusiastically checking out the olive tree and the plants, I glanced to my left – and fell instantly in love.  You’ll notice I do that a lot of ‘falling instantly in love.’ but ladies, there’s no need to lock up your husbands. It’s things I fall for – particularly Spanish things. But I digress.

When I looked to my left, I got my first view of Mount Escotera, one of the highest mountains in the Sierra de Callosa range. As mountain ranges go, it’s small but perfectly formed, rather than big and beautiful. It runs for 4.6 kilometres along the River Segura, surrounding the town of Callosa, after which the range is named. The mountains are formed from limestone, so there’s no vegetation on them, but the changing colours as the sun hits the peaks from different directions are amazing to see.

At its highest point, the range is 572 metres high. Mount Escotera is the most visible peak from Algorfa, which is around 20 kilometres from 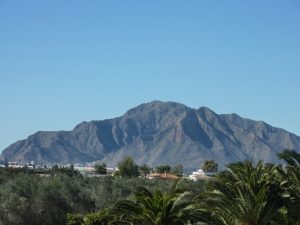 Callosa. The village nestles in the foothills of the range.

Because I can see Escotera from my terrace, I call it ‘my mountain,’ and that’s caused a bit of dissent here at La Finca over the years. One friend, who goes one better than me and can see it from her roof solarium, told me it was actually HER mountain, because she’s lived here longer, and she has a better view than I do. I wasn’t having any of that – she didn’t even know what it was called, but my superior research skills soon solved the mystery. I told her she was an Unfit Mountain Mother if she didn’t even know what her child was called.

My friend Bev was more difficult to deal with. She not only knew the name of the mountain, she’d been hiking on it as well, so she thought that gave her possession rights. When I told her she was also an Unfit Mountain Mother for trampling on her baby, she said the best mothers were those who were tactile with their children. Don’t you just hate it when people have an answer for everything? That’s my job! 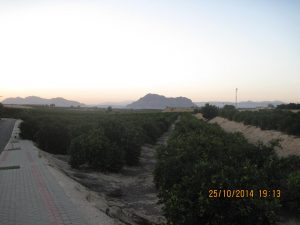 In the end, we decided we’d share parenting duties, and when Bev moved to a larger house at San Fulgencio, I congratulated myself that I finally had my mountain to myself again. But the gods conspired against me. When we visited Bev and Alex in their new hacienda, the first thing I saw from the dining terrace was – my mountain! And it was up close and personal too. They have a wonderful view, and they can just sit there looking at it all day if they want to. It was all I could do to stop myself from stamping my foot and screaming ‘It isn’t fair!’

Finally we have reached a compromise though. The San Fulgencio side of the mountain is Bev’s, and the Algorfa side is mine. Although I did assure my mountain that I was only pretending to let Bev have it for a quiet life. Sneaky, aren’t I?

10 Responses to Mount Escotera – ‘my’ mountain!