So, are you making good use of the fish counter in your local supermarket? 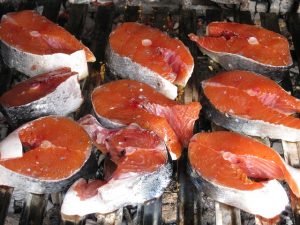 Every now and again, Tony and I think the same thing at the same time. It happened today in Consum. As we passed the fresh bread, I thought, ‘If I got a nice barra, we could get some mussels and I could make moules mariniere for supper.’ As the thought flitted through my mind, Tony said ‘Why don’t we get some nice mussels for supper, after all the meat we’ve eaten over Christmas?’

Great minds think alike, or small ones seldom differ? I prefer to think of it as a meeting of minds after 25 years together. Either way, we headed for the fish counter, and waited while the guy served the couple in front of us, advised them how to cook the salmon they were buying, and threw in a huge bunch of flat leaf parsley. The salmon looked lovely, and when I investigated, it was on offer at €5.95 a kilo for whole salmon, so we decided to get some too.

We like salmon steaks rather than fillets, and we chose a piece that weighed just shy of 1.5 kilo. The guy cut it into 8 thick steaks, scraped the scales off, and removed the head. All that for less than €8.50. And when he weighed our mussels – Galician mussels which are grown for 18 months until they’re huge and plump – he picked every one over, discarding damaged ones and pulling off the beards.

So, we ended up with a kilo of the best mussels in Spain for €2.95, and 8 salmon steaks. All prepared and ready to cook, and absolutely no waste. And of course, it’s all healthy eating for a ridiculously cheap price. How on earth can people say it’s expensive to eat well in Spain?

If you haven’t bought from the fish counter in your local supermarket, check it out next time you’re there. Don’t be put off by the heads, tails, bones and stuff – the people behind the counter will prepare it for cooking, and also advise on how to cook it if you’re a novice.

I like to poach salmon in a little white wine, parsley, lemon juice and black pepper. Or if you prefer your salmon pan fried, marinate for around 20 minutes in a mixture of olive oil, lemon juice and black pepper, then fry in a heavy bottomed pan using a little olive oil. Salmon is easy to cook, because you can actually watch it changing colour as it cooks. So, why not be a bit adventurous, and cook some fantastic Spanish fish tonight?

2 Responses to So, are you making good use of the fish counter in your local supermarket?