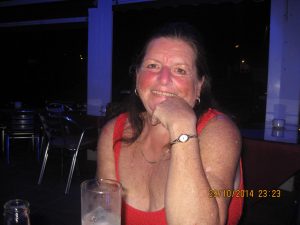 I ask you – Do I look like a Roundabout Girl?

Talking to a friend the other day, the subject of the Roundabout Girls came up, and I was reminded of the time when I was President of our community, and I needed to meet an electrician who was coming to sort out the community lights after one of those really heavy downpours we get here. Miguel had never been to La Finca, so I arranged to meet him at the Commercial Centre roundabout. As soon as I put the phone down, Tony said:

‘You do realise that you’ve just arranged to meet a man at the roundabout, don’t you?’ (For anyone who may not know, roundabouts in Spain are often places where ladies belonging to the oldest profession in the world ply their trade).

I hadn’t even given it a thought, to be honest, but what could be the problem? For a start, the tiny roundabout at the entrance of the urbanisation is hardly likely to yield enough passing trade to make it worthwhile setting out a stall. And I was 59, and carrying a few extra pounds, so who was going to pay for me to pleasure them? More likely they’d want me to do the paying!

Although I was pretty confident that Tony was worrying over nothing – as usual – it did sow a seed of disquiet, so I decided to leave it until the last minute to walk up to the roundabout. Good plan, doomed to failure, because just as I arrived at the rendezvous, Miguel called to say he’d been delayed and he would be another 10 minutes. Oh dear! I didn’t have time to go back home, so I sat on the wall at the entrance to the roundabout, and tried to look as if I had every right to be there.

It worked for two or three minutes, and then the Police patrol car parked directly opposite. .What’s a girl to do? This girl decided to do anything rather than make eye contact with the cops, but it was obviously the wrong thing to do, because the next thing I know, one of the officers is striding purposefully in my direction.

I panicked, and almost every single word of Spanish I knew left the building. I couldn’t for the life of me remember the word for an electrician – which is el electricista if you want to know – so I did my best with what I could remember. I remembered to wait was ‘esperar,’ and since I couldn’t recall the word for electrician, I said the next best thing: ‘Espero a un hombre.’

Turned out it was the worst thing I could have said, because the policeman started to look serious, and motioned me in the direction of the patrol car. I’d just told him I was waiting for a man – on a roundabout in Spain!

I could just picture the headlines in The Coastrider – ‘Community President arrested for soliciting in Algorfa,’ and I was wondering how I could talk my way out of it, when my Spanish had exited my brain and both policemen seemed to be short on English.Of course, prostitution isn’t actually illegal in Spain, but that fact had departed my brain along with my Spanish vocabulary. It was a bad moment, getting worse by the minute.

Luckily, Miguel showed up before they could cuff me and cart me off to the slammer. The cops told him why they’d stopped me, he asked me what I’d said, then told them the true – entirely innocent – version. Cue hilarity from two cops and an electrician. I bet they’re still telling the tale even now. As indeed am I, because it is funny really. It just didn’t seem so at the time!

Posted in Being Sandra in Spain

9 Responses to Do I look like a Roundabout Girl?