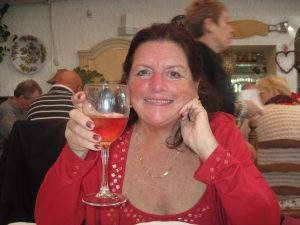 Lady in Red – my favourite colour.

I love the Spanish New Year customs, such as eating the 12 grapes before midnight chimes, but one that I hadn’t got around to was the custom of wearing red underwear on Nochevieja (New Year’s Eve). I don’t know why it took so long, because red is my favourite colour, and I do like brightly coloured underwear, but until 2013, the custom passed me by.

2013 started off well with the wedding of my niece, but just three days after the wedding, my daughter suffered a brain stem stroke at the age of just 40. It’s the most deadly type of stroke there is, killing over 80% of victims and usually leaving survivors severely disabled. For two weeks, her life hung in the balance, and just as she was recovering, we lost a very dear friend to lung cancer. My husband Tony was diagnosed with atrial fibrillation, which is a worry when you’re 80, so all in all 2013 was the worst year I can remember for a long time.

When it came to Nochevieja, I decided to put the red underwear thing to the test. I don’t wear a bra – haven’t done for years, because despite being 62, my boobs are pretty much self-supporting. That’s one of the benefits of not being at the front of the queue when they were handed out! So, I headed for Zoco Market and selected a pretty pair of red lace-trimmed knickers, New Year’s Eve for the use of.

So, did it do any good? Looking back on the year, I have to say yes. After years of refusing my requests for a dog, Tony finally saw sense and we adopted Paddy on March 17 – St Patrick’s Day. Now, you may say that had nothing to do with the knickers, but on New Year’s Eve 2013, when four of our friends tried to persuade him to see the error of his ways, Tony categorically refused and said he never wanted to hear mention of a dog again. Then, less than 3 months later – right out of the blue – he told me to choose a rescue puppy from the Coastrider. I reckon the knickers heard him and worked their magic, don’t you?

Professionally it’s been a very good year too. My blogs on Eye On Spain went from strength to strength, pulling in over 10,000 views a month, my writing earnings increased, and I set up the Facebook group Writers On Spain with my friend Jane Walters. We were chatting, and we said it would be great to have a group where we could all promote our own writing and that of our friends. From that Sunday morning chat in May, Writers On Spain was formed. We just thought it would be a community for a few writer friends to network and swap ideas and advice, but it’s grown into a thriving community of over 200 members, including a number of published authors.

In October, this website went live, and within a couple of months, it had won the Blog of the Month award from respected expat site Spain 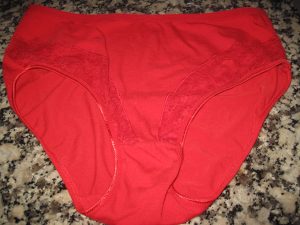 My ‘lucky’ red knickers. Come on, you didn’t expect a pic of me wearing them, did you?

Buddy. And in the last days of 2014, I started to write my first book. Again, you could say it’s nothing to do with the knickers, more a case of hard work and successful networking, but I like to think they had a hand in it somewhere. I’m a creative, and we get funny ideas sometimes.

My daughter continues to make good progress after her stroke – the only permanent legacy seems to be deafness in the right ear. She’s also subject to mood swings and fatigue, but that seems to be settling down gradually. At least she’s still with us, and living a pretty much normal life again.

All in all, 2014 was a very good year – here’s hoping 2015 will follow suit, personally and professionally. Happy New Year, everyone!

3 Responses to Lady in Red (knickers!)