Oh dear! I did ask Paddy if it was wise to vent about Gizmo in public, but he would insist on writing that rather incendiary guest post. If you haven’t seen it yet, you can find it here. As you may imagine, Killer Chihuahua is not exactly ecstatic about it, and he’s insisting on the Right to Reply.

Paddy says Gizmo can’t do that, because it’s not his Mummy’s blog. However in the interests of fair play and free speech, I feel I have to let Gizmo tell his side of the story.  I now have two Very Disgruntled Dogs on my hands, so let’s hope that when Gizmo’s got this off his chest, they’ll call a draw and we can all settle down again. 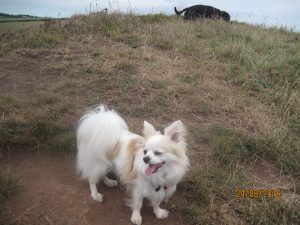 Me on the cliffs with Paddy. If I’d known what he ws going to write about me, I’d have pushed him over while I had the chance!

The trouble with Paddy the Petrified is he has no respect for his elders, and no backbone. After all, at 5 years and 2 months to his 4 years and 7 months, I have much more life experience to pass on, but he doesn’t take any notice most of the time, because he’s so bouncy I’m sure he’s on elastic. So now and again I have to be a bit forceful, but I don’t nip the backs of his legs like he says I do – it’s more a little tug on the long hairs to remind him who’s the boss around here, And then he goes all Drama Queen with my Mummy and his Mummy to try to get me into trouble.

He comes across as all hard done by, but I bet he didn’t tell you what I have to put up with, did he? Paddy is 35 kilos to my 5, so of course I have to address the discrepancy by being a Little Dog with a Big Attitude. Unfortunately, my attitude is the only big thing about me, and that seems to fascinate Paddy. Or to be more accurate, one little thing seems to fascinate him, which is why I call him Paddy the Pervert. Not to put to fine a point on it, every chance he gets, he’s after my willy! It’s most undignified – whenever Mummy or Aunty Sandra picks me up, his cold, wet nose is there, right where I don’t want it.

The other day, I was walking along, minding my own business, when Paddy shoved his nose under 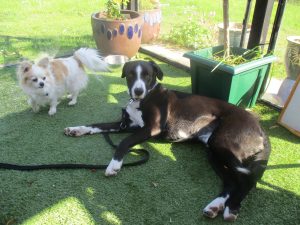 Making sure Paddy behaves at Aunty Lesley’s. As the older, more experienced dog, I have to keep him in order.

me and lifted me so high, I almost did a cartwheel. When I complained to Aunty Sandra that if I was a human, I’d be able to get compensation for that sort of behaviour, she came out with a very hurtful remark. She said, ‘No you wouldn’t Gizmo – your willy is so small, Paddy could counter sue and ask for a search fee!’ Not difficult to see where he gets his disrespectful behaviour from, is it?

While we’re on the subject of willies, you need to know something else. Being the doggy equivalent of an irritating younger brother, Paddy has taken to copying what I do. So if I elevate my leg against a particular tree or rock, he has to do the same. They say immitation is the sincerest form of flattery, but I wasn’t very flattered recently,  when he decided to use the same attractive clump of marsh grass as me. The problem was, instead of waiting for me to finish, he had to do it at the same time. Only he went around the other side and we were nose to tail, which suited him, as it gave him another sneaky chance to check out my willy. When he raised his leg, I got a shower on the top of my head, and it wasn’t even raining!

Mummy and Aunty Sandra laughed their heads off, and then my walk was cut short because I had to go back and have a bath. Paddy’s obssession with my willy is absolutely not healthy – and now it’s getting to the stage where I fear for my dignity about 20 times a day. If anybody has a Dog’s Life, it’s me, not that big, attention-seeking lump!

Not content with that, Paddy the Purloiner is always pinching my dinner. I’m a dainty, well brought-up boy, and I don’t scoff my supper like the Hounds of Hell are after it. I like to savour my food, and graze on it during the day. However, I don’t get the chance these days, because Paddy comes and pinches my dinner, sometimes before he even finishes his own. I tell you, it’s a wonder I haven’t faded to a shadow of my former self.

I tried to get my own back the other day by pinching his dinner, but of course, his bowl is much bigger than mine, and I couldn’t get my head in there unless I balanced my paws on the edge of the bowl. The trouble was, once I bent my head down to nibble on his meaty chunks, the bowl tipped over, and Paddy’s dinner went all over me and Mummy’s kitchen floor – which she’d only mopped that morning. So that was a telling-off and yet another bath, just for trying to get even with that thieving mutt!

The worst thing of all though is the unfairness about going out. My Mummy is always thinking of 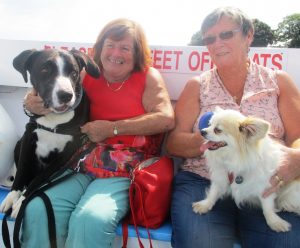 Mummy and me with Paddy and Aunty Sandra. Like I said, we take him everywhere.

nice places to take us for runs, where we can meet and play with other dogs. But sometimes Aunty Sandra takes Paddy off on her own, and she won’t take me as well. It doesn’t matter how much I cry, and I even follow her to the door, and give her the full-on Puppy Eye Treatment, but she still won’t take me. As if that wasn’t bad enough, Paddy the Poser comes back bragging about what a lovely day out he’s had with his Mummy. It’s too much for a lovely boy like me to bear.

So people, just as you shouldn’t believe everything you read in the papers, don’t believe everything you read online – especially if it’s written by a big black brute who’s scared of his own shadow. Never mind – one day karma will come along and bite him on the bum. Or maybe I will, if I can get Mummy to buy me a little doggy step ladder. That will give him something to whinge about!“