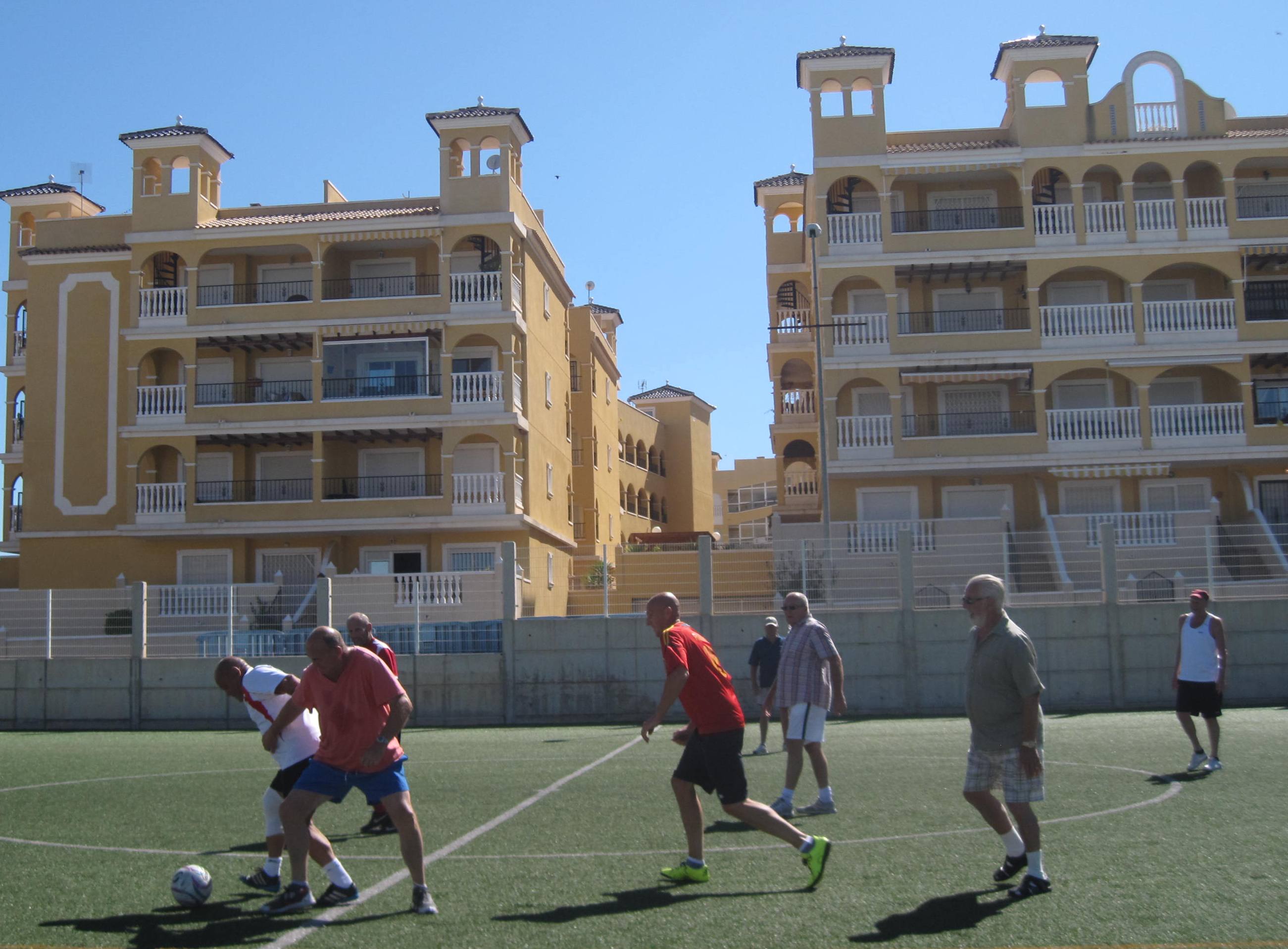 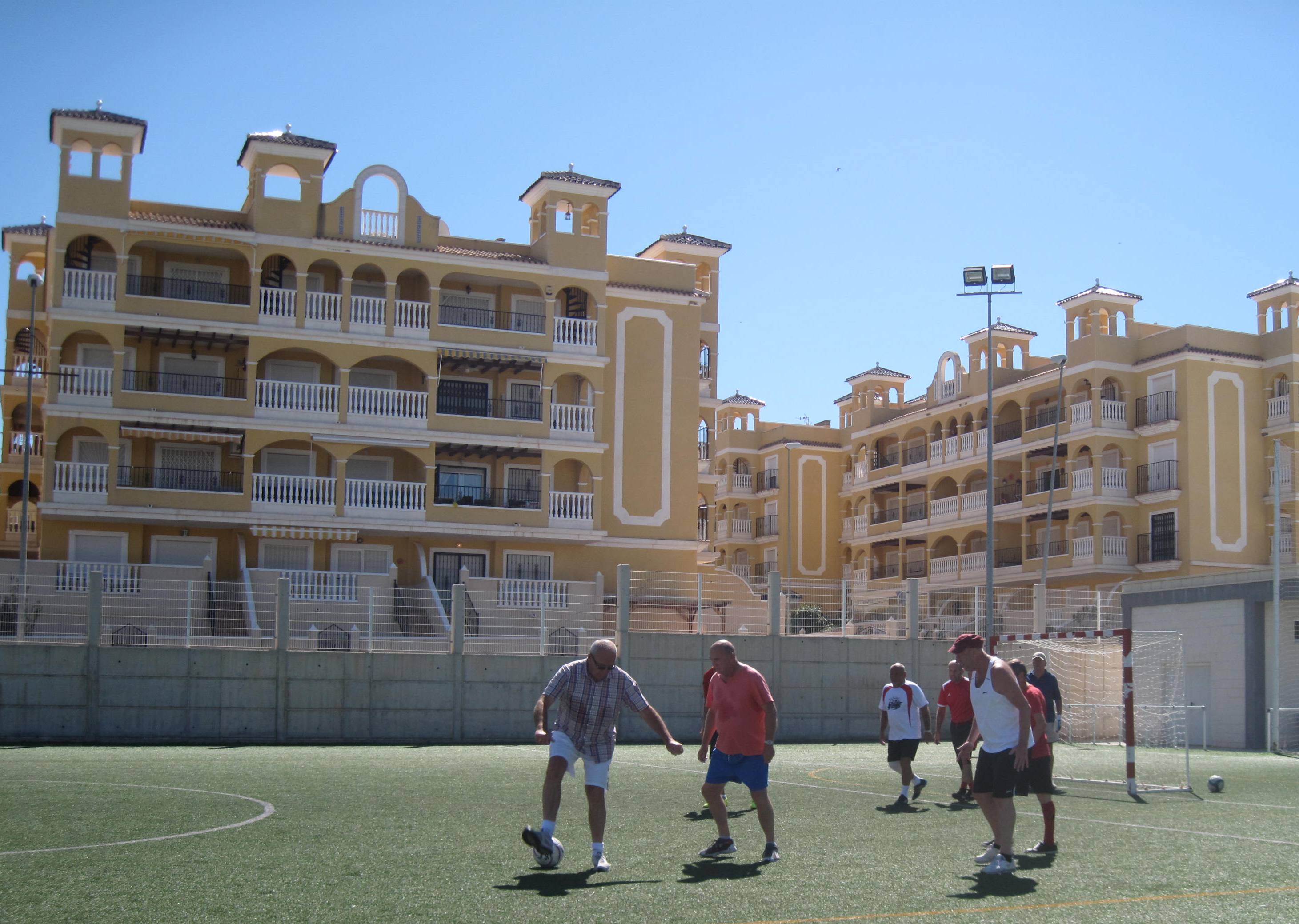 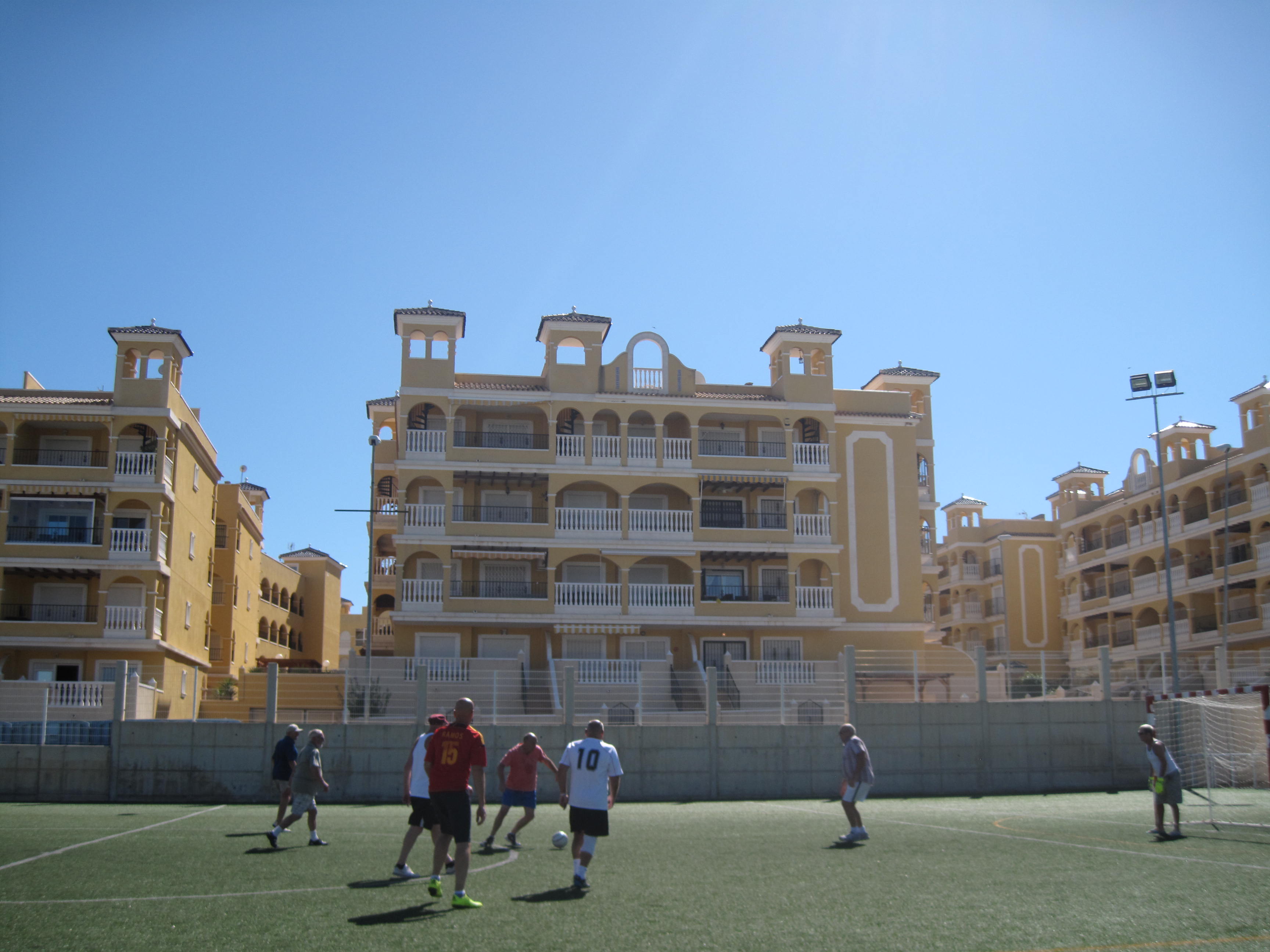 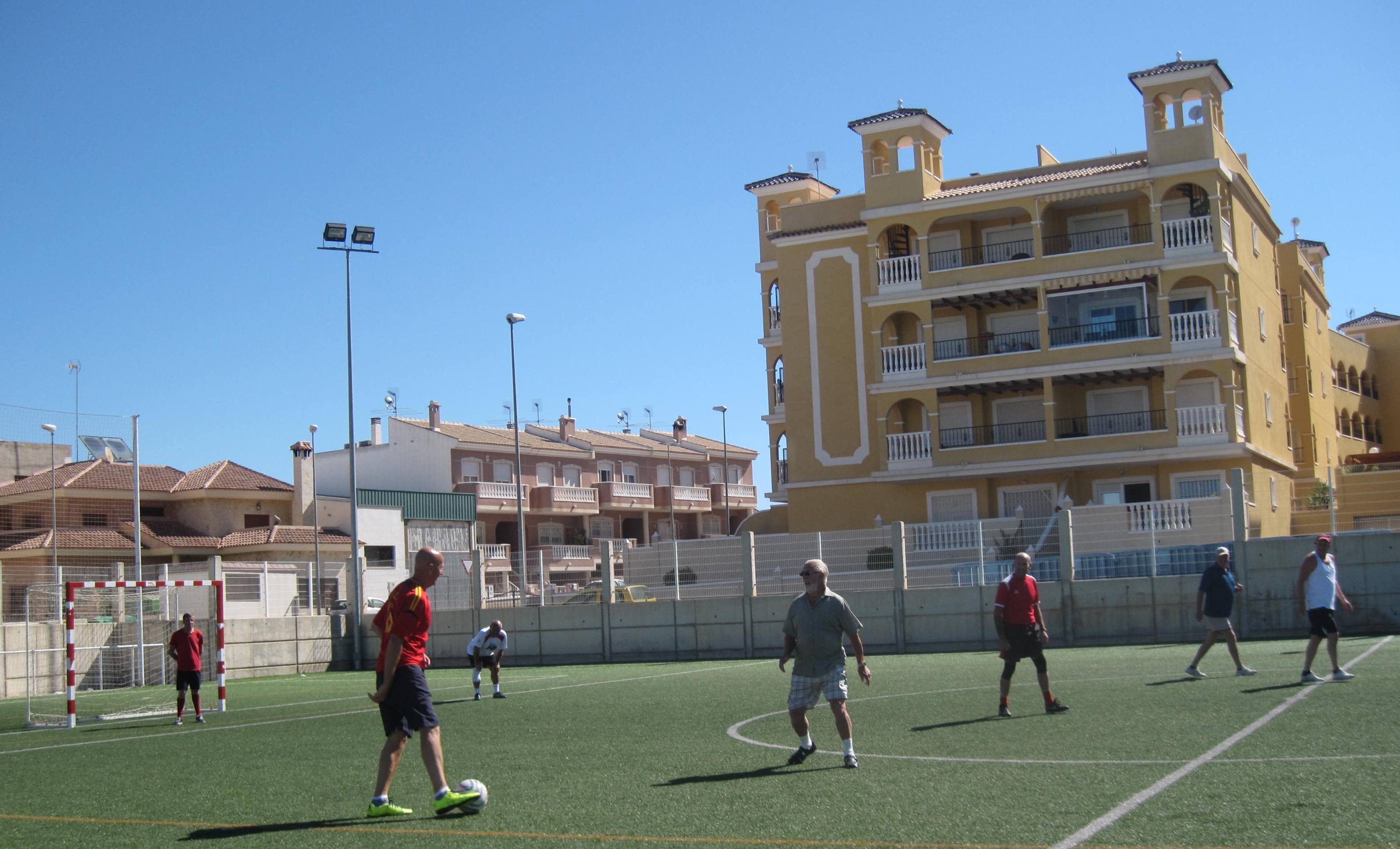 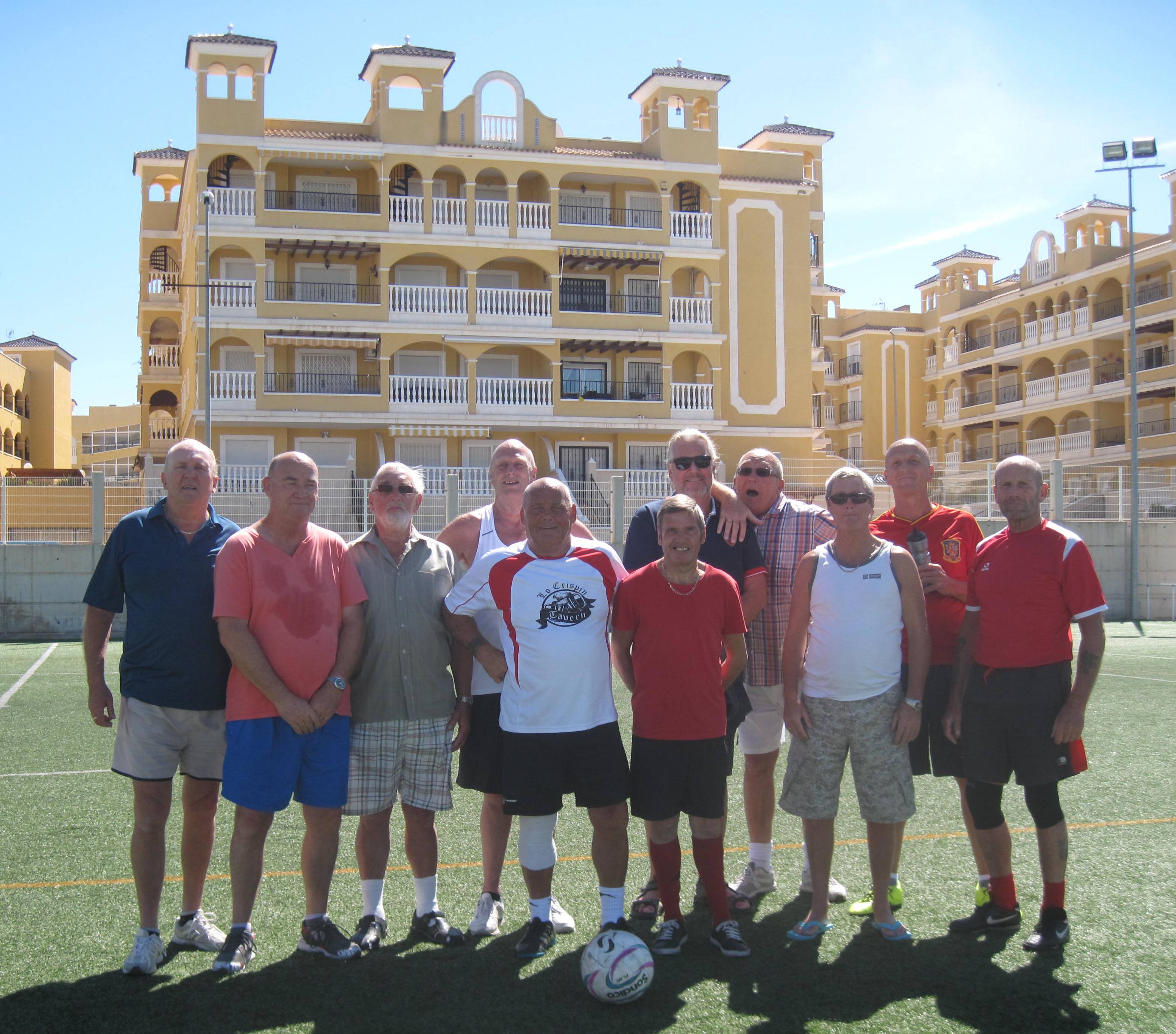 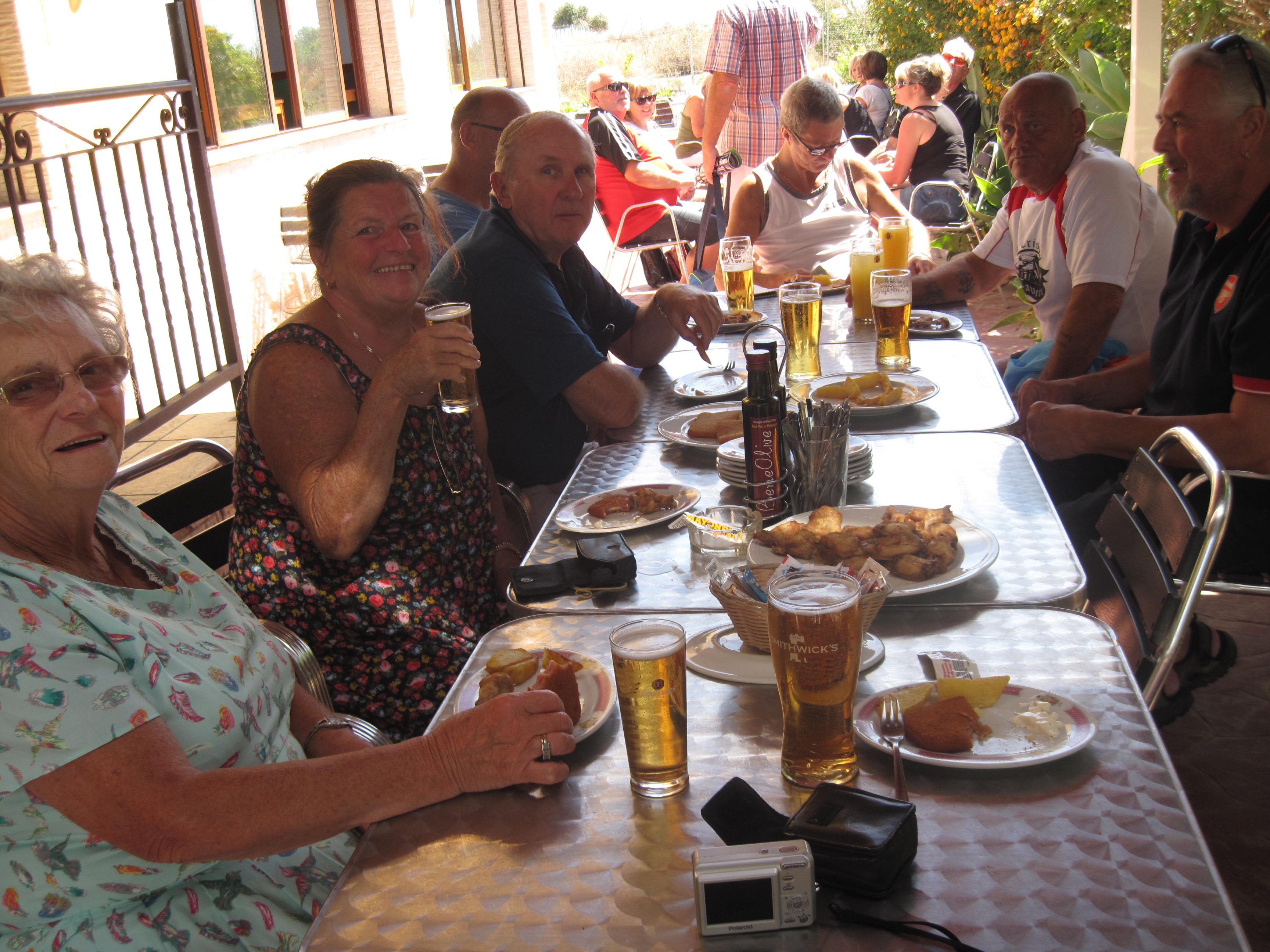 I love being Sandra in Spain. I get to do lots of interesting things that, in the normal run of things, I wouldn’t have access to, and last Thursday was no exception. Our neighbour Dean is keen to keep fit, and he was telling me how much he enjoys walking football. That’s a new one on me, because most of the football I’ve seen includes running for the ball, rolling around on the floor in the hope of getting an undeserved penalty, sliding into the tackle and diving to make the catch. But walking? I had to see this for myself, so I headed along to the Algorfa Stadium with Larry and June in tow. Larry is a keen football fan and Spurs supporter of many years standing, but walking football was a new one on him, too.

Algorfa has had a walking football team for around a year now. Mike Cooper is the organiser, and the team – which is based at the Lo Crispin Tavern – meets on Monday afternoons from 4.00 until 5.00 pm and Thursday mornings between 10.30 and noon.

Briefly – and stating the blindingly obvious – in walking football, you walk rather than run. One foot should always be in contact with the floor, the ball should never go above waist height, and it’s a non-contact sport, so sliding tackles are off the menu. The game is played in 15 minute sessions, and if you’re in need of a break, that’s fine, because there’s no limit on the number of substitutions. It all makes for a more slower paced experience than the beautiful game we know and love, but don’t think it’s an easy option. While you don’t need to be fit – or even know how to play regular football – to take part in a walking football match, you can expect a serious work out.

However, you do need to be over 55, because walking football is designed with the older gentleman in mind. There’s no upper age limit, as long as you want to get fit and have fun while doing it. You’ll also need a sense of humour, because it’s a laugh a minute with these guys, both on and off the pitch. Most of the team members have nicknames. There’s Chicken George, whose real name is Steve, but got his nickname because he demolishes so many chicken wings at the post match feeding frenzy. Then there’s Big Chris and Little Chris – only Big Chris is little, and Little Chris is big. Lino Keith got his name because he spends so much time rolling around on the floor, while organiser Mike Cooper is known as Cooperman. I didn’t quite have the nerve to ask where Tom Tit’s nickname originated!

For the spectators – or WAGS (Wives and Girlfriends), as the watching ladies are known – walking football is just as much fun as it is for the players. The lads won’t win any tournaments with their soccer skills, but they do have a great time while they work out, and this communicates to the crowd – well, the four of us, anyway. After the match, it’s back to the Lo Crispin Tavern for post match refreshments and analysis. Mine Host David is very much involved with the walking football, although he’s far too young to participate. He generously sponsors the team shirts, and provides the post match nibbles, which include industrial quantities of chicken wings for Chicken George. I got in quickly to try one, and I have to say I can understand the attraction.

The Lo Crispin Walking Football team don’t take themselves too seriously, either on or off the pitch, as is clear from the post match reports, circulated by Cooperman after every game. Our friend Larry got a special mention – and his very own nickname, as this excerpt shows. They were a man short, and Larry got talked into a game, even though he’s just shy of 79 and hasn’t been near a football in over 30 years.

For the second quarter there appeared from the watching crowd of four a gent who said he could see the unfairness of the lop-sided teams that he felt he ought to make things a little fairer. This gent was Larry the Lamb and at 78 years of age made Chicken George (56 or so he tells us) look a bit slow.
Larry the Lamb although not match fit tried hard to get the Pure Whites back in contention and made a few jinxing runs down the wing, trouble is this was while the ball was on the other side of the pitch!!!! It was like a Lamb to the slaughter.

As you can see, you don’t need special skills or equipment to enjoy walking football – just the right age requirement and the right attitude to have fun and get fit. If you want to see what it’s all about, head along to the Algorfa Stadium on Monday afternoons or Thursday mornings, or email Cooperman on supa.coopa1992@gmail.com for more details. You don’t need to live in Algorfa – if you turn up, you’ll be made very welcome. WAGS welcome too!

StumbleUpon
0
Posted in Around Algorfa
Google+