Why I’m mad about Spanish food 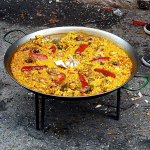 Paella – just one of the Spanish foods I’m mad about!

‘Mad About Spanish Food’ is the title of one of my blogs on Eye On Spain, and it’s a perfect description of how I feel about Spanish food and cooking. For around 20 years before we moved to Spain to live, we holidayed here, mainly on the Costa Brava. Tony and I have a rule that wherever we travel, we eat the local food, and we’ve always loved Spanish food because it’s made with  fresh, seasonal ingredients, and there are no fancy sauces to mask the flavours of the dishes.

While we were preparing to move to Spain, I started to read up on traditional Spanish cooking, and I realised just why Spanish food tastes so good. It’s because most recipes have very few ingredients, which means the flavours come through loud and clear. It’s unusual to find a Spanish recipe with more than half a dozen ingredients, and that makes cooking Spanish food almost as easy as eating it. Whether it’s tapas or a three course meal, even a novice in the kitchen should be able to produce an authentic Spanish meal for the family. To me, as a former catering manager, anything that opens up cooking to more people has to be a Very Good Thing.

Another great thing about Spanish food is that it’s healthy. The Mediterranean Diet – which very much reflects how Spanish people cook and eat – is acknowledged to be one of the healthiest eating plans in the world, because it’s based on lots of fruit, vegetables, whole grains, lean protein and olive oil. And it’s all natural – any self-respecting Spanish madre would rather cut both arms off than allow an E number to cross the threshold of her kitchen.

On a purely personal note, that is great news. I have Lupus, which means I am always battling internal inflammation. And because of other health issues, I can’t take anti-inflammatory medication. However, thanks to the Mediterranean Diet in general, and Spanish food in particular, I manage to keep the inflammation under control through diet.

And since much traditional Spanish food is based on peasant-style recipes, cooking Spanish is inexpensive as well as tasty. Even the iconic paella started life as a basic but filling meal for the workers in the Valencian rice fields.

So thats why I’m mad about Spanish food, and why there is a special category in the blog devoted to food and drink in Spain. I’ll be sharing recipes and tips for cooking Spanish meals, reviewing my favourite restaurants and telling you about my favourite Spanish foods. Oh, and the drinks too – I’m also mad about Spanish wine. At Piddock Place, any time is Cava O’ Clock!

StumbleUpon
0
Posted in Food and Drink in Spain
Posting....
Google+