Hungry? I could eat a horse – or a donkey! 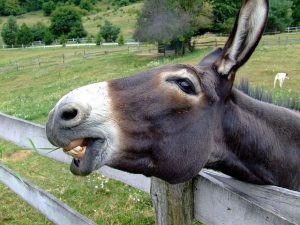 Donkeys are everywhere in Spain – but not often in restaurants!

These days, my Spanish is pretty good. Not fluent, but I can shop in the village without needing a word of English, and I can pass the time of day with the locals, and sit and read the Spanish papers as I enjoy a glass of wine in Plaza Espana. However, it was not ever thus. When we first arrived, I had taught myself enough to just about get by, so I felt quite confident about going to an ‘abuelo’ restaurant where nobody spoke a word of English.

It all started off well. I’d made good use of Jane Cronin’s Spanish word lists, so I was confident there would be no nasty surprises placed in front of us. However, it went downhill when the bread and ali oli came out. Tony’s a bit of a traditionalist, and he wanted butter with his bread. I did try to explain that the Spanish don’t really do butter with their bread, but he wasn’t having any of it. So I called over the camarero – and then discovered I couldn’t remember the Spanish word for ‘butter.’

I’ve got a pretty logical mind when I haven’t been too enthusiastic with the cava and vodka, so I tried to reason it out. A lot of Spanish words are very similar to French words, except where the French words end in ‘e,’ the Spanish equivalent often ends in ‘o.’ So, remembering that the French word for butter was ‘buerre,’ it seemed a natural progression to remove the ‘e,’ add the ‘o’ and tell the camarero that ‘Mi marido quiere burro con su pan, por favor.’

The camarero looked bemused, and I naturally assumed he was astounded that Tony could be so ignorant as to ask for butter with his bread in a Spanish restaurant. He shook his head, went off to the tapas bar, and spoke rapidly in Spanish to a couple of customers who were obviously English. Then I heard loud laughter, and told Tony he’d shown me up rotten by asking for butter. The way they were laughing , you’d have thought he’d asked for something really outlandish.

The English guy came across to our table, still laughing, and that was when I wished the ground would open up and swallow me from view, because it wasn’t Tony who had scandalised the locals on our first foray into village life. Never before in the family’s 30 years of feeding the locals had they been asked for donkey with bread. And that, dear reader, was exactly what I had requested. My new English friend enlightened me regarding my mistake, while the camarero went off to the kitchen to fetch Tony’s mantequilla, which is what I should have asked for in the first place. Cue more hysterical laughter as he related the tale to madre and padre.

Six years down the line, we still use that restaurant – it’s become a favourite, because the food is always excelllent and the atmosphere is friendly. And almost every time we go in, our camarero sticks his head into the kitchen and calls ‘Prepare el burro para la senora.’ (Prepare the donkey for the lady). I’m never going to live it down, but at least it got us noticed in the village!

4 Responses to Hungry? I could eat a horse – or a donkey!