The Cucaracha Club – a spy thriller filmed in and around Torrevieja on Spain’s Costa Blanca – is finally hitting the cinemas after being awarded a 12A certificate by the British Board of Film Classification (BBFC). The UK premiere is in Darlington on 15 May 2017, and the first cinema showing is in Torrevieja three days later on May 18. Distributors in America, England and Ireland are also showing interest based on the trailer alone, so this low budget, independent film is set to make a big impact. 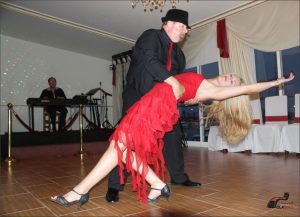 The plot line is pretty standard – a gang of international crooks are kidnapping the children of ambassadors across Europe and demanding big ransoms for their return. However, when twins Georgina and Jordi are kidnapped and their nanny is murdered, there are the makings of an international incident – and not just because their father is an ambassador. Events of almost 20 years ago mean the CIA, MI6 and various other organisations and individuals are interested in how it all pans out. The Cucaracha Club is the first in a trilogy of films, and while there is a stand alone plot line for each one, the audience will learn more about the events that led to the leading male and female characters – George Ramshaw and Elana Neumann – being in Torrevieja in the here and now. That means there are a few question marks for the audience, but it doesn’t interfere with the enjoyment of the film.

The action opens with a flash back to Havana, Cuba 19 years before, and a tragedy that affects everyone involved very deeply. Fast forward to the present day, and it’s immediately obvious that George (Billie Anthony Gaddess) and Smoggy (Clive R. Gray) still carry the scars. Now retired from the special services and doing their best to drink Torrevieja dry without a supporting cast, these not-so-special agents are recalled to active service, along with the new generation of spies and Careen (Julie Kay) who has swapped state secrets for the secrets of the bedroom in her new life as owner of a pole dancing club and brothel. George and Smoggy are members of The Cucaracha Club, a group of troubleshooting spies sent in to sort out tricky situations, and so-called because they are seemingly indestructable. Nobody knows about their existence, so if the operation goes pear-shaped, MI6 and the CIA can exercise ‘plausible deniability.’ The subtext is that they’re also expendable, and it soon becomes clear that MI6 big cheese Cameron Carrington (Tom Watt) would be quite happy to see George and Co. erased in the line of duty.

There is no glass ceiling in The Cucaracha Club – the lasses get as much of the action as the lads. You can’t imagine James Bond letting the girls take the lead, but it’s clear George sets great store by the abilities and judgement of Paddy (Caoimhe O’Shea) and Charly (Charlotte Howarth).  For reasons that become clear during the action, he’s not so sure about Elana, despite their previous personal and professional partnership.

The initial kidnap operation is slick, professional  and cinematically satisfying, thanks to director Rai Woods’s great eye for visuals, and one has to wonder how on earth George and Smoggy and their team can get the better of them. However, as the story unfolds, it becomes clear that these disparate spies really are a club, and it’s teamwork and trust – and a little help from their friends – that wins through.

This spy thriller is different from most, because there are no special effects or gimmicky gadgets, and no bedroom olympics and bloodbaths. It’s an old fashioned film in the nicest way, because it tells the story through the cameras and the dialogue. You don’t feel like you’re watching the action through the window of a speeding train, you can hear what the actors are saying, and you can see what they are doing. There are hints of Hitchcock in the clean, crisp cinematography and the attention to detail in the framing of shots. The production crew make the most of the spectacular scenery around Torrevieja, particularly in the beach scenes, Elana’s ride in the Trans Am Firebird and the climax of the action at Torrevieja’s stunning marina and waterfront. That’s something you’re not likely to see in a James Bond film either. Eon Productions were refused permission to film some of Bond’s exploits in the marina, but Siesta Productions had no problems securing the location, with a Spanish Navy submarine thrown in for good measure.

That said, any film is only as good as the storyline and the cast, and here again The Cucaracha Club ticks the right boxes, which is surprising since only Billie, Tom Watt, Robbie

There’s a killer on the loose, and his actions will have impacts for many years

Gallagher (Assassin Harry Palmer Kilkoyne) and Dennis Baer (CIA Director Pard) are professional actors. Caoimhe O’Shea runs a bar – The Bog Road, which is featured in the film – Yvonne Haughton (Elana) owns a garage and Clive Gray is more at home behind a computer desk than in front of the cameras. You’d never know from their performances on screen though. Caoimhe is a natural as Paddy, with just the right combination of toughness and Irish humour to make her a credible yet decorative spy. Yvonne delivers a strong performance as Elana, and you almost – but not quite – feel sorry for the villain when she finally catches up with him. Yvonne actually came up with the final line of the film, and it doesn’t give anything away to repeat it here. Hoever, it’s better still when seen on screen. She holds a mirror out to check for breath, before using the same mirror to tidy her hair after the scuffle and deliver the immortal line:

Some of the cast have appeared in amateur dramatic productions before, so they’re not complete novices, but it’s very different performing to camera, since the actors are supposed to be in natural situations rather than performing for an audience. Thigh slappers not required on set! One section that really highlights the calibre of acting comes early on, when George and Smoggy are drowning their sorrows ahead of being recalled to active service. It’s not easy being a convincing drunk when you’re drinking ginger ale rather than whisky at 10.00 am, so the scene can be in the can before the bar opens for real. However, watch Billie’s facial movements, and observe how Clive has to strive to enunciate the simple words ‘active service,’ and you’re witnessing film acting at its best. No shouting, posturing or twisted facial expressions, just crisp dialogue delivered in the best way to suit the mood of the scene. Most of the performances are good or even very good, verging on excellent. Even Robbie Gallagher’s non-speaking role as the assassin has a crisp, professional look about it, so it was good to learn when I interviewed him recently that he has a meatier role in The Cucaracha Club: The Route of All Evil.

There are occasions when the acting goes a little over the top, but that can happen in any film. Mark Lord’s ambassador relies rather too much on facial expressions, and occasionally Carrington’s PA – played by Karen Love – relies more on body language rather than dialogue to deliver her lines, losing the natural effect in the process, but these are minor criticisms really. The whole cast pull together to create a very watchable film, and for many of them it’s a first appearance in front of the cameras. 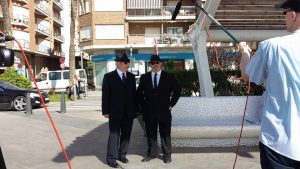 George and Smoggy – the not-so-special agents are about to deliver!

Another surprising thing about The Cucaracha Club is that it has original music, written by musician Peter Taylor, who lives in Los Montesinos, just a few minutes’ drive from Torrevieja. He wrote three songs, including the theme tune, after reading the screenplay, and it’s clear from his lyrics that he doesn’t see espionage – or expat life – as necessarily glamorous. In fact, he feels the main characters are sad and lost, and just as much in need of help as the kidnapped twins, who, by the way, are feisty and fearless, just like their mother. This is the abiding impression I got, and it’s what Billie, Clive and Rai intended to come across. That, more than anything, is what lifts this film out of the ‘run of the mill spy caper’ category. You can identify with the main characters, and you want them to succeed, and have a better, happier life once the cameras stop rolling.

The Cucaracha Club is not likely to win any major awards, but that’s not what the production crew set out to achieve. This is no cinematographic ego trip – the film was born out of a genuine desire to create a quality product that will touch a wide, international audience and showcase the talent and the quality of life that is available in and around Torrevieja for all to appreciate. Beautifully filmed, consumately acted, and exciting, moving and entertaining in equal measure, The Cucaracha Club is one of those films you’ll be glad you’ve seen, and will want to watch again, just in case you missed anything good the first time. I can’t wait for the next episode in the saga. And I’ve changed my mind. Not-so-special agents? The Cucaracha Club spies are very special indeed.

Photo credits: All images reproduced with the kind permission of Siesta Productions Ltd.

Posted in The Cucaracha Club