An epitome of beauty and a paradigm of elegance? Yep, that’s me! 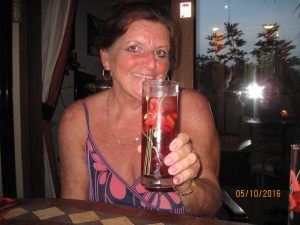 I scrub up well when I need to, but isn’t it going a bit far to call me an ‘epitome of beauty’ and a ‘paradigm of elegance?’

One of the many things I love about being Sandra in Spain is when people say to me how much they enjoy reading my writing, whether they contact me through social media or, as happened last week in Algorfa, stop me in the street to say hello, even if I’ve never seen them before in my life. I’ve met some lovely people who have gone on to become firm friends, whether on social media or in ‘Real Life’ – people I would never have met but for the writing.

However, it has its downside too. There are people who dispute your facts, argue with your opinions and take what you write personally, especially on social media. I don’t mind that too much –  if I provoke an extreme reaction with my writing, it’s hitting a nerve, and at least it’s better than no reaction at all. When I received a Facebook friend request from a finance manager in New York earlier this week, who said he ‘Loved my writing,’ I thought at least this isn’t a pedant, a nutter or a know-all from Norwich who knows more about life in Spain than I do, even though they’ve only ever spent a week in Majorca (pronounced Madge-orca) in August.

Now before we go any further, I must point out that Norwich has no more know-alls than anywhere else, and I have had no detrimental communications from anyone who lives there, ever. I chose Norwich purely for alliteration purposes. It could just as easily have been Northampton, Nuneaton, North Shields, Nanpean, Nelson, Nantwich or Nether Wallop. Actually, I like the sound of a know-all from Nether Wallop, so let’s forget Norwich and go with the know-all from Nether Wallop. Previous disclaimers still apply – Nether Wallop has no more know-alls, etc…. Now, where was I? Oh yes, I remember.

So, this finance manager messaged me to say ‘Hello dear, thanks for accepting the friend request.’ I did think that if he was calling me ‘dear,’ he must be a bit older than the profile pic of a fairly fit forty-something. See what I mean about alliteration? It works well. The next communication changed the game though. It’s worth quoting word for word, so here goes:

Hello Sandra, Such a beautiful smile you have. You are an epitome of beauty, and a paradigm of elegance. your beauty is a blessing and a testament of the craftsmanship and skill of our creator. You can mend hearts and conjure up love with that smile.

To be honest, I think I’d rather have had moaners, pedants, nutters or know-alls. It’s all a bit over the top isn’t it? I mean, I’m 64, carrying a few extra pounds and a few wrinkles, and although I do scrub up okay. beauty and elegance are not words I’d apply to myself, especially when combined with epitome and paradigm, although lots of people say I have a nice smile.

The inappropriate combinations of words did lead me to think maybe my admirer wasn’t everything he said he was, but I thought I’d ask the audience on social media – or rather my Facebook friends – what they thought. Not before I sent him a reply though, which I thought was rather restrained, given the circumstances.

Steady on there – I am married, and I’m not on Facebook to conjure up love and mend hearts, just to keep in touch with family and friends and promote and share my writing. And although I added you as a friend because you said you loved my writing, you haven’t even mentioned it. Don’t contact me again.

So, on to Facebook I go, and what do I get? One ‘friend’ says it’s probably a Nigerian with a fake profile who is after my money. He’s dipped out there then, because I’m a starving writer living in a garret. Well, I’m not starving, and it’s a garden flat, but you get the picture. Another ‘friend’ says seeing as he not only knows big words but can actually spell them, maybe we can recruit him to work for the site we both edit for, so we don’t get so much crap coming our way. Yet another ‘friend’ says ‘Never mind Sandra, you do have a lovely smile. At least he told the truth about that.’ Brings a lump to your throat, doesn’t it?

Ah well, it’s a lesson learned. Next time someone tells me they want to be my friend because they ‘love my writing,’ I’ll direct them to my author page, unless I know them, or we already have mutual friends. However, like buses, the scammers come three at a time. The next one – who also ‘loved my writing’ – was an American general from Alaska with the peace keeping force in Syria. Hello? What peace keeping force would that be? According to the United Nations website, there are 16, none of which are in Syria. Next!

The perfect end to a perfect day was the third American who ‘loved my writing.’ He was also in the military, although he didn’t specify his location. After bombarding me with messages while I was trying to watch Midsomer Murders and Lewis last night, he said:

My dearest beautiful love, why are you not talking to me tonight?

Enough is enough. No more Mrs Nice Writer. I told him to Foxtrot Oscar. Only those weren’t the exact words I used, but this is a family-friendly blog.

Since each of the three ‘Americans’ used the same reason for wanting to friend me, I’m wondering if they are all the same person. Maybe -maybe not. However, just in case, all my sister epitomes of beauty and paradigms of elegance should check out their friend requests before accepting them. Be careful out there in social media land!

Posted in Being Sandra in Spain
Google+