El Dia del Padre, 19 March – how does it compare with the UK and America? 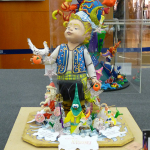 A Fallas figure. Seems a shame to burn it , doesn’t it?

Father’s Day, or El Dia del Padre, is celebrated on 19th March, and, as in many cases in Spain, the fiesta has religious as well as social connections.

Father’s Day is also St. Joseph’s Day. As Jesus’ father, Joseph is the most important father in history. It’s a public holiday in Spain, although some regions may choose another day instead of St Joseph’s Day.

Father’s Day as we know it in the UK has more secular origins. In 1909, Sonora Smart Dodd of Washington decided to commemorate her late father on his birthday in June, as her way of thanking him for raising 6 children as a widower. In 1924, President Calvin Coolidge declared the third Sunday in June Father’s Day. Over the years other countries, including the UK, adopted the custom.

In the week before El Dia del Padre, children in Spanish schools will be busy making cards and gifts for their fathers, and grown up children living and working away will do their best to return home for the day. In Spain, the family is paramount.

In the Community of Valencia, where we live, 19th March is also the culmination of Las Fallas in Valencia, a 4 day fiesta of fireworks, music and effigies which culminates in an enormous bonfire on March 19th. Las Fallas originates from the days when the carpenters of Valencia used to burn old wood and wooden utensils used throughout the winter in honour of St Joseph, who of course was a carpenter as well as Jesus’ father.

These days, the emphasis is on fun, and Las Fallas is well worth a visit if you’re in Valencia mid March. Be prepared for the noise, though. Spain is a noisy country anyway, but the level of decibels at Las Fallas is akin to a sonic boom. That’s one thing I love about Spain and the Spanish people; they certainly know how to celebrate, whatever the occasion!