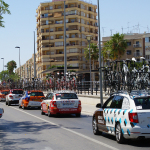 Driving in Spain can be a real challenge, despite the great roads and lack of traffic.

I only started to drive on the ‘wrong’ side of the road when we moved to Spain in 2008, and I have to say I much prefer driving in Spain to driving in England – particularly around Algorfa, where more than 4 cars at a junction constitutes a traffic jam! One thing I’ve never got to grips with though is the psyche of the Spanish driver. The moment he spots a foreign number plate, the Spanish motorist morphs into Fernando Alonso. He simply must overtake, even if it’s on a bend or there’s a solid white line in the road, which means no overtaking, the same as it does in the UK.

There’s a simple explanation for this. Your average Spaniard is never in a hurry – unless he’s behind the wheel. Then, he just has to get there first. It’s nothing personal against the Brits, he’ll overtake anyone who isn’t going fast enough for him, which means just about everybody else on the road. That’s why when you’re already on a roundabout, a Spanish driver will leap out in front of you, because he knows he can get there first. Or he’ll overtake you on the roundabout, because you’ve sensibly slowed down to negotiate it, and he can see no good reason for that.

Speaking of roundabouts, what really annoys me is the way the Spanish signal their intentions. They don’t, and you have to play Mystic Meg and guess where they’re heading. Again, a little basic knowledge of the Spanish character helps here. The average Spaniard is so full of his own importance behind the wheel he expects everyone to know what he’s doing and where he’s going. If you don’t guess right, it’s your fault, not his. He’s in a juggernaut, therefore it’s obvious he’s taking the motorway for Alicante. Why should he cut short his mobile call or stub out his cigarette just to let the other road users know?

There are red and white crossings on very busy roads in Spain, at which drivers are obliged to stop for pedestrians. Don’t bank on it, though, because nobody seems to have informed the Spanish motorists of their obligations, so they’ll sail across the red crossings happily. That’s if they haven’t parked across them to pop in for a cheeky lottery ticket or a barra de pan.

The best way to get across the road safely is to try to cross where it’s patently dangerous to do so. The Spanish drivers will admire your spirit and disregard for the rules and will stop to let you across. I know, because it’s happened to me more than once. A good place to try this is the Punta Prima roundabout, by the Punta Marina shopping centre. Save your legs – don’t walk up to the blue pedestrian bridge – just walk out in front of one of the cars. Everybody does.

However, I don’t recommend you try this with young children in tow or while in possession of a zimmer frame.
So, has this put me off driving in Spain? Not a bit of it. If anything, the whimsical attitude of Spanish drivers has made me a better driver, because I’m extra vigilant these days. I’m also a ‘glass half full’ girl, so after a particularly frustrating experience on the carretera, I console myself with the happy knowledge that at least the Spanish aren’t so fond of hooting their horns as the Italians.

Posted in Only in Spain!
Google+