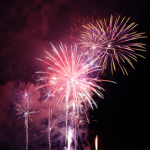 Fireworks are a major part of the Constitution Day celebrations

Dia de la Constitucion, or Constitution Day, 6th December, is unique in Spanish culture. For a start, it’s about the only national holiday that doesn’t have religious overtones. It commemorates the National Referendum of 1978 to approve the draft constitution which was the gateway to democracy in Spain following Franco’s death. Around 87% of   Spaniards voted in favour of the Constitution.

While the celebrations for Constitution Day are formal, civic affairs rather than the usual community fiestas, the Spanish people are proud of their constitution and their part in its inception, and few Spaniards will pass up the chance to enjoy a national holiday!

These days, there are likely to be protest marches alongside the celebrations, and Constitution Day is recognised as the secular beginning of Christmas celebrations in Spain. This is when decorations go up in shops, streets and houses, although the increasing expat population means some areas, particularly around Torrevieja, put up street lights during November.

What of the Spanish Constitution itself? Well, it is unusual in that it makes legal provisions for social rights for its citizens and defines Spain as ‘A Social and democratic state, subject to the rule of law.’ As the Communist Party were politically strong at the time of the transition from Dictatorship to Democracy, the Constitution includes provision for state intervention in private companies ‘in the public interest’ and workers’ rights to ownership of the means of production. This is something of a mixed blessing, and politically unpopular in some quarters.

The Constitution allows for autonomy in the 17 Communities of Spain and in some cities, making the country more of a federation than a unitarian state, although neither of these terms are actually used. However, the Constitution does state that Spain is a united and indivisible nation, in which other nationalities such as the Basques and Catalans can co-exist in harmony. It doesn’t always work in practice, but that’s the theory.

Each autonomous area has its own Statute of Autonomy, which in many cases is drifting away from the ideals expressed in the Constitution. This brings its own problems, as various provinces include statutory clauses which may impact on other communities. For example, in Andalusia, Aragon, Catalonia and Extramadura, there is a clause giving these regions exclusive management powers over any rivers flowing through their boundaries. As you might imagine, communities upstream and downstream are unwilling to accept this, as decisions will be made over which they have no control but with which they will be required to co-operate.

The death penalty is allowed during wartime under the Constitution, although it has been abolished in other circumstances. However, as it has been dropped from the Military Code of Practice, there is effectively no death penalty in Spain.

There has been a major amendment to the constitution under which residents from other EU countries living in Spain may vote in elections and stand as candidates in local elections. There are also moves to alter the succession of the monarchy so that the eldest child, rather than the eldest male child, inherits the throne, although this hasn’t happened yet.

To British people, celebrating a constitution may seem a bit odd, since there is actually no written constitution to celebrate, but it’s an important day in Spain’s calendar, if only because it kicks off Christmas.