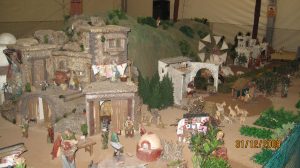 8 December is ‘Dia de la Concepcion Immaculada,’ or ‘Day of the Immaculate Conception’ in Spain. It’s yet another public holiday, much to the annoyance of our neighbours, who went out to start their Christmas shopping in earnest and found all the stores closed!

Saturday 6th December is also a public holiday for Constitution Day, but most of the major stores were still open for business. Immaculada is different, though, as it’s a religious holiday. Christmas may be only 2 weeks away, but to the Spanish, it’s more important to commemorate the day and attend Mass than to put a few more Euros in the till. This highlights a major difference between Spanish and English culture – unless stores are compelled by law to close, as is the case on Easter Sunday, no English retailer would dream of closing to business for 2 days in the final run up to Christmas.

There is often confusion surrounding this holiday, because many people believe it refers to the conception of Jesus. However, it is actually the commemoration of the conception of the Virgin Mary, by her mother Anne. In most of Spain, Mary is revered more than Jesus, and Immaculada is enthusuastically celebrated.

After Mass, the Spanish people use this day of leisure to decorate their homes, put up the Christmas Tree and set out the Belen. (Nativity Scene) This is when Christmas begins in earnest for Spanish families. Nobody here puts up their decorations in November, which is rather refreshing. It’s like Christmas used to be in England about 40 years ago.

Each town and village, however small or large, will unveil the Belen on Immaculada, or within days afterwards. The Belen is more than just a Nativity Scene as we know it; it often aims to represent the whole of Bethlehem at the time of Christ’s birth. As well as the main group of Joseph, Mary, Jesus, the angel, ox and ass, (Nascimiento or Mysterio in Spanish) there will be workers, soldiers and animals to portray village life 2,000 years ago. Families spend years building up their own Belen, adding more figures each year.

Public Belenes can be spectacular. The size of the village has no bearing on the size or scope of the Belen. In our small village of Algorfa, the 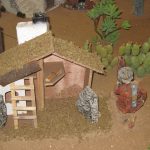 Belen takes up almost half of the Plaza de Espana. The figures have moving parts, including the ‘shitting shepherd,’ who, much to the delight of the children, can be found on the outskirts of the scene.

If this sounds a little disrespectful, it’s not really. It comes from the Catalan custom of including a defecating figure in the Belen. (El Caganer). This is supposed to bring good luck and good health for the year ahead, as the figure is ‘fertilising’ the ground, and is obviously healthy himself, as all the plumbing is working well! The figure is often a shepherd, but some towns will have a caricature of a local personality cast as a humorous addition to the Belen.

The Spanish Belen is so much more than just a nativity scene; it’s been a vital ingredient of Christmas in Spain since 1758. For more information on this fascinating subject, including a guide to building your own Belen, visit Spanish Nativity soon. I’ll tell you more about the Belen in another post.