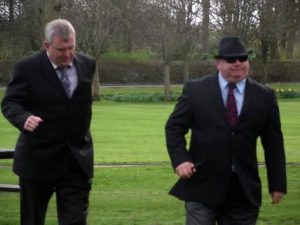 Graham Robinson (left) with Billie Anthony Gaddess on the set of The Hit, where they first met.

While there are some professional actors in The Cucaracha Club, many of them have either never acted on  screen or have only really appeared as extras or in small roles, and their ‘day job’ is something completely different. Graham Robinson, a train driver from Sunderland who has no connection with Spain other than through screenwriter, executive producer and male lead Billie Anthony Gaddess falls into that category.

He’s no stranger to acting though. He’s appeared as a policeman in the tv series Vera and as a barman and a building worker in George Gently.  He met Billie while working on The Hit. They shared some scenes, and Billie told Graham – as he told everybody and still does – all about The Cucaracha Club.  Philip Routledge, who co-wrote the screenplay for The Cucaracha Club with Billie, also  wrote the screenplay for The Hit, so there’s a strong North Eastern connection here. Graham agreed to help Billie realise his dream, and he spent 6 days in Spain filming his role. Agent Jacks is new generation CIA, and he tries to keep two retired but recalled CIA agents in line as everyone trundles around Torrevieja for different reasons.

As a native of Grimsby, Graham does a pretty impressive American accent, which is even more remarkable considering he only knew about it a week before shooting. He has a small, mainly light relief part in the film, but like many of the quality actors in the film, he’s been promised a meatier role in the sequel, The Cucaracha Club 2: The Route of All Evil.  Shooting is scheduled to begin in the autumn of 2017, and Graham is looking forward to renewing his acquaintance with the cast and crew who made him so welcome in Torrevieja. He played golf with Peter Taylor, who wrote the original music for the film, and enjoyed nights out with singer Chloe Leigh and entertainer Stevie Spit, who plays transvestite vicar and wannabe spy Father Paul. He also got to share a few beers and a Chinese buffet with cast members, including hit man Robbie Gallagher, on the eve of his 50th birthday.

Not many people walk away from an encounter with Robbie alive – he’s played a few killers in his acting career. Graham, on the other hand, was quite pleased to be still vertical and breathing at the end of The Cucaracha Club. In his debut movie, Interview With a Hitman, his sole contribution was to throw a few punches before being shot in the head.

While Graham really enjoys working on films, he’d love to do more theatre, but his profession is a problem. Although he gets a lot of time off, he also works irregular shifts, so getting to regular rehearsals can be a problem. He was involved with a play that went to the Edinburgh Festival, but had to pull out due to work commitments. He was also offered a role in the musical version of The Full Monty, but he felt the essentially British story was too Americanised, so he got to leave his hat – and the rest of his clothes – on!

So, what does the future hold for the train driver turned spy? There are more movies in the offing, and Graham spends a lot of time helping out at the University of Sunderland Media Studies Faculty, where he encourages students with their acting and academic dissertations. But the major production on the horizon is his wedding next year. Before I signed off from our Skype chat, I asked Graham what stood out for him about his time on set on The Cucaracha Club.

Two things really. I was proud to be part of such a wonderful film. They managed to pull off something that others with less faith and vision thought would never work. But what really stunned me was how such a small, independent film managed to blag so much stuff. I mean, who gets to use a submarine, jet skis, aeroplanes, fancy villas, night clubs, classic cars and boats for nothing?

Clearly the production crew were impressed with Graham’s work on The Cucaracha Club, since he’s already secured for the sequel. Early audience reaction is encouraging too. A friend who was with me when I watchedf the film for review kept saying ‘He/ she must be a real actor.’ When I told her Graham was more used to being on the railway tracks than on the screen she said, ‘You’re having me on. He’s too good to be just a train driver.’ Praise indeed for the quiet man from Sunderland. Look out for much more from Mr Robinson.

Posted in The Cucaracha Club

2 Responses to The Cucaracha Club: How train driver Graham Robinson ran off the rails to become CIA Agent Jacks