The Cucaracha Club: Local Drag Queen and Spanish Champion Boxer turn to spying in the name of Art! 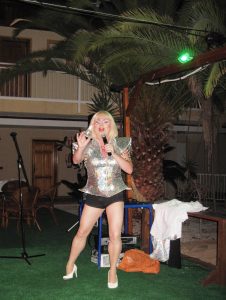 Stevie Spit in action as Lady Gaga – he needed to be a bit more discreet as transvestite vicar Father Paul in the film!

The Cucaracha Club is a remarkable film in many ways. It’s the first feature film to be produced entirely on location in and around Torrevieja, and for many of the actors and production crew, it was the first time they’d been involved in a film, either on screen or behind the scenes.

Made on a budget of just €23,000, the spy thriller showcases the talent and the beautiful surroundings that many people take for granted, and it’s a successful collaboration between expats and locals. I spoke to two of Torrevieja’s most high profile personalities who appear in the film  – expat drag queen, comedian, ventriloquist and singer Stevie Spit, and Emiliano Casal, Spanish Lightweight boxing champion and businessman, ahead of the film’s first public showing in Torrevieja on May 18.

Stevie Spit has been in Spain for 12 years, and is probably the Costa Blanca’s busiest and best-known entertainer. Originally from Glasgow, as well as entertaining for a living he mounts lots of charity events for local children, and also entertains troops and expats in Afghanistan every year. He’s also the only drag queen who gets regular work at the famous Benidorm Palace, and stages a charity variety show there each autumn.

It was the community feel of The Cucaracha Club that originally appealed to Stevie when he was asked to appear in the film – and the stunning original songs written by Peter Taylor of Los Montesinos. He plays a transvestite vicar – talk about typecasting! As Stevie says:

I took on the part because of Peter’s beautiful music – and I quite liked the idea of getting into the habit, so to speak. Trouble is, in my purple and black priest’s outfit, I looked like a walking bruise. And the dress and wig I had to wear was so dowdy, I had to ask around my female friends, because all my stage costumes were too glam. Don’t tell them I said that though, will you?

Emiliano Casal really couldn’t be more different, but he also played a vital role in the making of the movie, both in The Cucaracha Club itself and in liaising with the locals. Born in Buenos Aires in Argentina, he came to Torrevieja in 1999 at the age of 18 and is the first professional boxer to hail from Torrevieja.  Emiliano fixed it so that real Police and police vehicles appeared in the film, adding authenticity to the action. 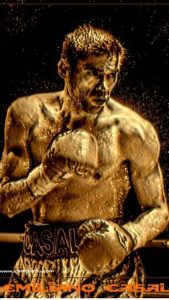 Being a professional fighter, Emiliano’s favourite scene was the fight on the boat towards the end of the film. It comes naturally to him, although he did sustain an injury battling against heavy machine guns with just his bare hands. He’s also a natural actor – after appearing in the pivotal barbecue scene, which was filmed at his own house, and some crowd scenes, he’s scheduled to appear in 33 scenes in The Cucaracha Club 2: The Route of All Evil, as well as having a major part in the final movie of the trilogy.

Over the next two years, he’s scheduled to appear in six films in total. At the age of 35, he’s looking at retiring from boxing soon and concentrating on his restaurant and real estate businesses and making movies.

So, why would Emiliano want to appear in a movie produced by British expats? Two reasons really.

I wanted to showcase Torrevieja, because the town has given me so much since I arrived here as an 18 year old. This was a chance to give something back, and to encourage collaboration between the expats and locals. This is a quality movie, and my Spanish friends are keen to see it.

Stevie is also set to play a meatier role in the sequel, so we’re set to see a lot more of these great ambassadors for Torrevieja on the big screen.

The Cucaracha Club is showing at Cines IMF in Torrevieja on Thursday May 18 at 17.00. Doors open at 16.30. Tickets available on the door or buy online at See Tickets.com, or these local venues:

Image credit: Thanks to Emiliano Casal for his permission to use his photo.

Posted in The Cucaracha Club
Google+