It can be a dog’s life when you’re living with a puppy! 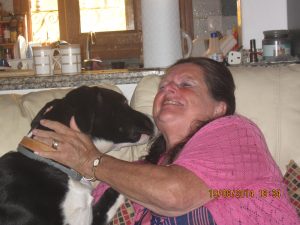 Sometimes Paddy is adorable – at other times, he leads me a dog’s life!

No matter how much you love your four footed friend – and Paddy is very much loved – there are times when I could cheerfully murder him, and a couple of months ago, I very nearly did. Within the space of a week, he committed three major misdemeanours. His behaviour forced me to bring Vodka O’ Clock forward by a good couple of hours, and seriously consider getting rid of either the husband or the dog. In fact, it’s still under consideration. I shall tell you the sorry tale of our Semana Most Shocking, when I finally realised that Paddy needed to be educated.

It all started when I was cleaning my teeth one morning. That can take a while, because I am have two sorts of teeth. There are the ones that Nature blessed me with, and there are the teeth that are like stars, because they come out every night. It was while these teeth were getting a scrub up that Paddy jumped at me, taking me completely by surprise. In case you’re thinking ‘Lucky lady – I wish my other half would do that,’ I should remind you that Paddy is the dog, not the husband, but I digress.

Have you every tried hanging on to anything when around 30 kilos of puppy launches itself in your direction? It’s nigh on impossible. The teeth flew out of my hand, making a perfect arc in the air. Paddy took off after them and caught them before they hit the marble  floor and cracked. Pity they didn’t, since  I could have got Tony on the case with the super glue. Paddy raced off with them, and proceeded to remove the teeth until all that was left was the plate. What’s more, he ate the evidence of the crime. Tony did say that if I waited for them to emerge, he’d glue them back on, but for some reason, that idea didn’t appeal.

So it was off to the dentist, and the Receptionist was very professional. She didn’t even smirk as I related my tale of woe – or at least, not until the other people in the waiting room started to titter. Then it was open season, so much so that the dentist came to see what all the hilarity was about. A dentist’s waiting room is not normally a place of laughter, but it was that day!

I was still working on the Mona Lisa smile which I’d need for the next few weeks when Paddy caused havoc again. Just like the stars – and the recently deceased teeth – I am also out at night. Late at night, on the terrace when it’s cool, catching up on the writing while the world is quiet and calm. However, my personal quiet and calm was shattered when Paddy mounted his Great Escape. He loves to sit on the garden wall, and watch the world go by. At 2.00am, there isn’t much world going by, so he  pushed through the cypress hedge that separates our garden from the next one to see if there was some action going down. There wasn’t, so on he went, finishing up three doors along in an unoccupied property.

I tried to encourage him to come back to me, but  he was panicking a bit. I  headed along the terrace with a ladder and his lead, and I was half way up the ladder when I realised the major flaw in the plan. The Policia Local patrol all through the night, every night, even though Algorfa is a – mercifully – crime free zone. Since they hadn’t been around since I waved to them from the terrace an hour ago, another drive by was probably imminent. Calling the dog a name I never even realised I knew, I took the ladder and the lead back home and waited. And waited. And fell asleep on the sofa.

By 4.00am, when Paddy finally made his way home, he was chastened by his adventure, and wanted to be with Mummy, even though he knows the bedroom is off limits, so he forced himself in there with me. I can’t remember when a male of the species last forced his way into my boudoir. Pity this one had four legs and a tail. Anyway, Tony was not impressed, especially when Paddy stretched his considerable length diagonally across the bed and refused to move, even for his favourite treats.

So the husband was grouchy, and ‘our dog’ suddenly became ‘my dog’ for some reason. We were both blamed for the Great Escape, and were still being treated like naughty school kids 24 hours later. When the husband said ‘Either me or that dog has to go,’ it was very tempting to go and start packing – and it wasn’t the dentistix and the squeaky toys I was thinking of.

They say bad things come in threes, and Paddy’s obviously heard that old saying, because the next thing he did was to go out in the garden and separate Tony’s burgeoning blackberry bush from its pot. It was a cutting from the main bush, and it was enjoying life in its nice big pot until Paddy found it. One minute it was there, the next it was gone, and although we hunted high and low for it in our  small garden, it appeared to have left the building. The next day, the mystery of the missing blackberry bush was solved. Those of a nervous disposition may want to look away now.

It appeared we were featuring in a remake of Alien when Paddy  started to whimper on the terrace – his gaze transfixed by a mysterious object that was emerging from just beneath his tail. All of a sudden, the penny dropped, presenting a great opportunity to get my own back on my dastardly dog. Reaching for a wet wipe, I grabbed the end of the blackberry root – for that was what it was – and gave it a good hard tug. Then Paddy became a locksmith and made a bolt for the terrace door and the safety of the lounge.

He cowered in the corner, with his rear end tucked safely into the angle between the master bedroom and the guest bathroom. And I didn’t feel in the least bit guilty. Does that make me a bad Puppy Mummy? Probably, but I can live with it. Anyway, by the end of that traumatic week,  I knew that the process of Educating Paddy needed to begin in earnest.

4 Responses to It can be a dog’s life when you’re living with a puppy!