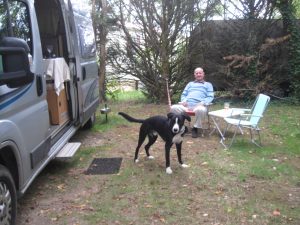 Tony and Paddy, relaxing on our huge pitch

Once a year, we take a trip back to England with our Trigano Tribute 650 motor home. More often than not, we drive up through Spain and France, stopping off at camping grounds or aires en route. We never book these ahead of schedule, or plan the sites we’ll use, because you never know how long it will take you to get there. You could have a good run through, and not be ready to stop at your pre-booked site, or there could be an accident, road works or any number of other hold ups, and you may need to stop before you make base camp, or risk falling asleep at the wheel.

When we discovered Camping Les Jardins de L’Adour was just a couple of miles off route, at pretty much the time we decided to rest for the night, we were rather pleased. The site is small and intimate, with a mixture of touring pitches and lodges which can be hired for the season or just a week or two. Each of the generously sized pitches is marked off with hedges, and there are trees to provide much-needed shade. We are in the south of France, after all!

We happened to arrive just as the site manager was organising a boules tournament, so one of the seasonal residents kindly let us through the barrier, helped us find a pitch we liked with an electric hook up, and told us to find the manager later to pay. We happened to miss him more than once, and we were expecting him to come knocking for his money. He didn’t – and we didn’t pay until the following morning, by which time we’d decided to stay for a couple of nights and enjoy the site’s facilities, and the peace and quiet of the area.

There are lots of thoughtful little touches – like the child-sized toilet in the sanitation block, and the baby bath and changing area at just the right height. There’s also a free hairdryer, and the water in the washing up sinks is hot enough for the greasiest dishes.

The site provides free wifi in the bar area, and it can also be picked up outside the units if you’re close to the bar. What’s really great though is that they provide an extension lead, so you can plug in your laptop or tablet if the battery is running low. And there’s even a spare computer that anyone can use to check emails, or even what their friends are doing on Facebook and Twitter.

You can buy bread, croissants and basic supplies – including wine and beer – in the small on site shop, and there’s a library, as well as a facility for cycle hire. Well, it’s not actually hire, because you can borrow a bike for free. There’s also a heated swimming pool and barbecue area, and a field where you can exercise your dog. A word of caution here – although the rules state dogs must be on leads at all times, the four site dogs are always running around the site, so if your dog is not good with others, be sure to keep him under control.

With so many facilities, we were wondering how much we’d be paying for the privilege of staying at Camping Les 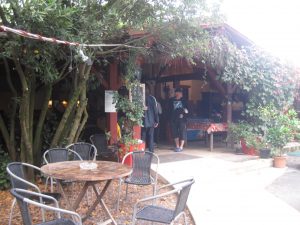 The rustic and welcoming bar area, where I sat and wrote this post

Jardins de L’Adour. We’ve been charged €20 or more per night for sites which were far inferior, both in layout and facilities. However, we loved the welcoming atmosphere, and the peacefulness, so we didn’t really care. And yes, dear reader, we were charged more than €20 – it was actually €22.20, but that was for two nights, not one.

So, if you’re looking for a reasonably priced stop over, or a relaxing place in the sun for your camping holiday in France, you’d go a long way to beat Camping Les Jardins de L’Adour. And it’s open throughout the year, unlike many French camping grounds. What’s not to love?