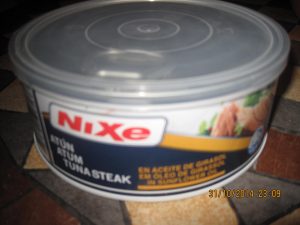 Monster can of Nixe tuna, ready to go

Tastes sometimes vary in Piddock Place. Take tuna, for instance. I love it, Paddy loves it, and Tony doesn’t mind it once in a while. So I always used to buy those handy small tins with just enough for one round of sandwiches, or a filling for a jacket potato. Then one time we were having visitors, and I was making a tuna pasta bake for 8 people, so I needed a large can. Looking in Lidl – my first port of call for shopping in Spain and England, I came across their monster size Nixe tuna. 900 grams – 650 grams drained – of lovely chunky tuna for just €4.29.

I daresay lots of people are put off by the size of the can, because I hardly ever see anyone else with one in the trolley, but I’ve kept it in the fridge, in the tin it came in with the plastic lid, for up to 5 days with no problems. And there are lots of other things you can do with it, apart from the obvious jacket spuds, sandwiches and salads. I make appetisers for buffets or tapas meals using leaves of cogolla (Little Gem) lettuce, or halved pequillo peppers. I fill them with various things – tuna, mayonnaise and sweetcorn, crab salad and cucumber, coronation chicken, prawns in Marie Rose sauce. The chunky tuna you get in the giant tins is also good in a tomato based pasta sauce over penne or spirals. And it made a fantastic tuna pasta bake too.

I alvays drain off as much of the sunflower oil as possible, first by lifting the ring pull just enough to be able to drain off the oil without losing any tuna. Then I have a crafty trick for getting rid of as much oil as possible. I place a coffee filter in a large plastic funnel – these are very cheap from the Chinese bazaars if you don’t already have one. Then the tube on the funnel goes into an empty milk or oil bottle, and the tuna goes into the filter in the funnel. You’ll be surprised how much more oil this extracts, but you need to be patient.

Which reminds me. When I was at school, during the Religious Education lesson, the teacher asked us to write a prayer asking for patience. I thought mine was very good, but the teacher wasn’t impressed. It went like this:

‘Please God, grant me the gift of patience, and can I have it right now, please?’ But I digress.

When the can is empty, Tony collars it to melt down all the end bits of the citronella candles we burn on the terrace during the summer. He puts a wick in the middle, and hey presto! – we have a long burning anti-mosquito candle for free. At the risk of Stating The Bleeding Obvious, I should say that it’s a good idea to give the can a good wash first, otherwise your candle will burn with a distinctly fishy smell. And no, we didn’t do that, but someone who shall remain anonymous to preserve what’s left of their dignity did. It ended badly, with the candle being consigned to the bin.

One word of warning – all monster tuna cans are not created equal. I recommend the Nixe one because it has huge chunks of tuna which hardly soak up any oil. But the own brand one they sell in Mercadona is more flaky than chunky, and no matter how well you drain it, you’ll get an oil slick the size of a small island on your plate. If you have any other recommendations, please pass them on in the comments.

So, have I tempted you to Go Grande when it comes to canned tuna?

2 Responses to Buying canned tuna? Go Grande and save money