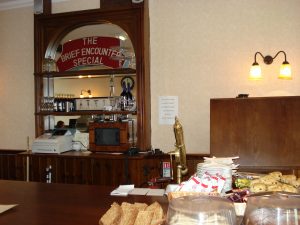 Back in 2007, when I was Glasgow bound for the finals of Mastermind, we decided to make a holiday of it and took our Toyota Hiace camper. We spent two weeks touring the north of England and Scotland, and the bonus was the mileage allowance the BBC paid covered all the diesel and most of the campsite fees. We also had a couple of nights in a hotel in Glasgow. One of our overnight stops was at Morecambe Bay, and while we were there, we visited Carnforth Station, the location of David Lean’s 1945 film Brief Encounter.

Why did director David Lean choose Carnforth as the location for his masterpiece? He didn’t actually,  although the Ministry of War Transport did believe Carnforth would be safe from enemy attack since it was so remote from the usual targets of shipyards and industrial areas. Brief Encounter was filmed early in 1945, when enemy attacks were still likely. And the rural town of Carnforth was distant enough from London to avoid the blackout, which would have caused technical problems while filming.

All location work at the station needed to take place between 10.00pm and 6.00am, so as not to disrupt rail travel. Like many other railway stations in wartime, Carnforth had thousands of troops passing through en route to foreign postings. In another link with the station, Noel Coward, who wrote the screenplay for the film, also made the station announcements.

Carnforth Station station was rebuilt in 1937, and was the third rebuild since 1846. Improvements included a new 890 foot long platform, and the longest unsupported concrete roof in Britain at that time.  This helped to make the station more attractive on camera. Carnforth would remain a busy railway junction until well into the 1960’s, when the Beeching reorganisation of the railways led to its slow but steady demise. By the dawn of the 1970s, it was a mere branch line, and the iconic buildings where Trevor Howard and Celia Johnson enjoyed their frequent, bitter-sweet meetings gradually deteriorated.

In 1996, The Carnforth Station and Railway Trust threw themselves into raising the £1.5 million necessary to restore Carnforth to its former glory days. In 2003, the Brief Encounter Refreshment Room finally 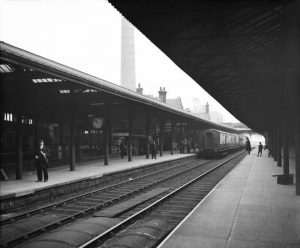 opened. These days, Carnforth Station Heritage Centre bustles again, hosting a number of exhibitions, steam train excursions and events throughout the year which are popular with schools, local clubs and holidaymakers.

The Brief Encounter Refreshment Room is really authentic. So much so that when I stepped into it, I almost expected to see Celia Johnson and Trevor Howard sitting at one of the tables with tea and biscuits. If only the refreshments were at 1945 prices, it would have been pretty much perfect! You can even hire the room for private functions if you wish – it would certainly make a great venue for a party for someone born in 1945.

Carnforth Station Heritage Centre is a real treasure for film buffs and railway enthusiasts alike, and the friendly staff are enthusiastic and knowledgeable about their subject. A few of the volunteers actually remember the filming and have some fascinating tales to tell.  You can also browse a great range of souvenirs in the shop, including a special edition DVD of Brief Encounter as a permanent reminder of your visit to Carnforth Station.

Admission to the centre is free during normal opening hours, although charges may apply for special events. Once you’re all Brief Encountered out, take a drive to Morecambe Bay. And if you’re in the motor home, there are a number of rural campsites overlooking the bay. When we were there, we were awoken by cows looking in the window. Good job we were Paddyless at the time!