Brandy – Spanish or something else? 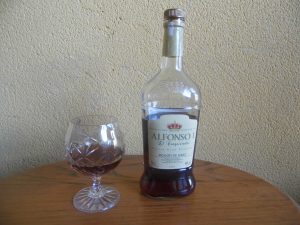 As my regular readers and my friends know, my two drinks of choice are cava and vodka. Never been much of a beer drinker, although I like the occasional cider. Anyway, coming in third behind the cava and vodka is brandy. I like my brandy with soda and ice, or with port and lemonade.

About 25 years ago, a Cornish farmer introduced me to the delights of port and brandy. In those days, brandy was my drink of choice, but after the mega hangover that followed a birthday night on port and brandy – and the alcohol-related death of the farmer who introduced me to it – I gave brandy a wide berth for a very long time.The day after my birthday, we visited the Royal Cornwall Show in Wadebridge, but the only thing I saw was the ceiling of the First Aid Tent, as every time I tried to stand up, I got very woozy. Luckily, it was a stinking hot day, so I blamed it on heat exhaustion, and nobody questioned it.

Now I’m older and wiser – well, older anyway – brandy is back in my life. I still enjoy a port and brandy, but these days it’s diluted with lemonade, and made to last a lot longer. It took me a while to become accustomed to the very different taste of Spanish brandy, after being used to the French stuff. That Napoleon must have been a right boozer, mustn’t he? I mean he’s been dead about 200 years, and you can still buy his brandy. But I digress.

Anyway, these days, I’m happy enough to drink Spanish brandy. In fact, I love the Torres 10 Year Old. My favourite brandy of all though, is Asbach, from Ruddesheim in Germany. At €22 a litre, it’s not cheap, but neither is it particularly expensive, compared to some of the French cognacs. I always treat myself to a litre at Christmas, along with a bottle of Torres.

However, when I was doing the last minute bits and pieces in Consum on Christmas Eve, I noticed they had another brandy on offer – Alfonso 1 El Conquistador Solera Gran Reserva, at €10.50 instead of €11.95. I also noticed that it was 40% alcohol by volume – unusual for Spanish brandy, which is usually 36%, or even 30% in some cases. So, into the trolley it went.

Of course, when I got home, I had to try it. I mean, you can’t have your Christmas pudding ruined by bad brandy, now can you? Or at least, that was my excuse. I have to say it’s just about the smoothest Spanish brandy I’ve ever had – including the Torres. Whether that was down to the higher alcohol content or the method of production, I don’t know, but I’ll certainly buy it again.

So, I’m curious now – what do other people think? Spanish brandy, French, German – or something else? Asbach is still my overall favourite, but the Alfonso 1 and Torres are not far behind. Maybe you can recommend a good Spanish brandy for me to try? I’m always happy to engage in research if it means I can promote Spanish products. That’s another excuse I’ll be sticking to!

5 Responses to Brandy – Spanish or something else?