Bottom’s Up! – The cost of Christmas cheer in Spain 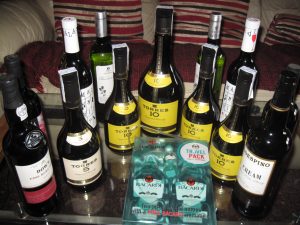 All our Christmas booze for €89 – a real bargain!

‘Tis the season to be jolly – and jolliness is often helped along with a large helping of Christmas spirit of the bottled variety. So today we headed to Alvibe Bodega in Los Montesinos. It’s on Avenida del Mar, next to the Repsol garage, and a couple of doors away from La Herradura restaurant. From the outside, it’s pretty unprepossessing – just a huge brown metal depot – but inside is a veritable treasure trove for those who like a drink, and I certainly do. Not that I’m an alcoholic you understand – they go to meetings and stuff, I’m just a bit of a lush. But I digress.

Anyway, there are certain ‘must haves’ on the Christmas drinks list. A nice brandy is one – Lidl’s Vega Cadur is okay through the year, but we do enjoy a nice Torres 10 year old Gran Reserva over Christmas. So I was pretty made up when I found a very special offer indeed – not one, but 5 bottles of Torres brandy for a little over €46. That’s three bottles of Torres 10, one bottle of Torres 5 year old, and a 1.5 litre bottle of Torres 10, which was a free gift.

When we priced up the bottles individually later, it would have cost us around €63, even at Consum’s prices, so we were well pleased with that. And with a bit of luck it will last well into the New Year – or at least the middle of January! In the UK, a bottle of Torres 10 is anywhere between £17 and £23 – my case equated to £33 at today’s rates, so I’m a very happy bunny indeed!

That wasn’t the end of the bargains though – they had a special deal on Bacardi too – two half litre bottles and a miniature in a handy travel pack for just €11.99. That’s just under £9 at UK prices, so that was another good deal, since the best you can get is £15 a litre.

Tony loves a ruby port, and they can be a bit difficult to come by in our area. However, I did manage to get a Dow’s ruby from the bodega at just over €8, or around £6.00, which is half the UK cost. Normally, we settle for Mercadona’s €5 port, but hey – it’s Christmas, so let’s push the boat out a bit. Tony was also delighted to find a really nice cream sherry for just €6 a litre – and yes, he’s already tried it!

We also got some nice wines, including a 2012 Spanish Chardonnay which was a great BOGOF buy at €5.71 for two bottles. In total, we paid €89 for the equivalent of 6 bottles of brandy, a litre of Bacardi, a litre of sherry, a bottle of port, and 7 decent bottles of wine. That’s around £66, so we’re more than happy with our purchases.

People assume that bodegas are always going to be more expensive than the supermarkets, and while that may be true of some things, you can get some really good bargains if you hunt around, as well as getting case discounts. And if you’re after more specialised stuff – like Tony’s ruby port – you’re more likely to get it at a bodega. If you’re in the Los Montesinos area, why not take a trip to Alvibe? You won’t be disappointed. Cheers!

2 Responses to Bottom’s Up! – The cost of Christmas cheer in Spain