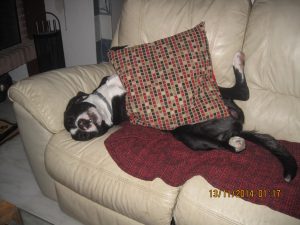 Paddy – still nervous after his Hare Brush, and trying to conceal himself under a cushion

Like all dogs, Paddy loves his walks, and being 30 kilos of boisterous puppy, he needs lots of them. We have two walks where he bounds free around the orange groves or the waste ground near our home, and then there are two quick ‘constitutionals’ morning and evening solely for download purposes.

Saturday’s constitutional was going very well. The tank was emptied, the departure lounge was cleared, and Paddy was enjoying the obligatory sniffing session on the way home when things went horribly wrong in his little world.

As he was investigating a particularly interesting smell on the edge of the waste ground, something came out of the bushes and boxed him squarely on the nose. The ‘something’ was a paw, and it was attached to the biggest hare I have ever seen. The hare then turned tail and fled,straight down a steep bank to safety.

I had visions of Paddy following him, and me flying through the air with the greatest of unease. I failed physics at school – I’m a creative not a scientist – but even I know that a dog lead and choker chain are not particularly effective as a parachute. And with 30 kilos of excited pup in  front of me, I could already hear the ambulancia sirens in my head.

As all this was speeding through my brain, in the same way that a drowning man allegedly sees his life flash before him, Paddy did indeed take off, and I was both astonished and delighted to find I was still on terra firma, even if I was going fast enough to catch Lewis Hamilton on a good day. You see, dear reader, my big, brave boy was scared out of his wits, and instead of chasing the hare, he was heading for home, and I was in the slipstream.

When we arrived at Piddock Place, instead of sitting in the courtyard for me to take his lead and collar off, Paddy scratched the front door frantically and hollered for Daddy to let him in. Then he bolted under the table and lay there anxiously, his big brown eyes swivelling around the room in case that vicious hare – who should have picked on somebody his own size – was in hot pursuit.

It took around an hour to coax him from his hiding place – he wouldn’t even come out for his favourite treats. It was only when our friends Bev and Alex arrived for lunch that he was persuaded to abandon his self-imposed sanctuary and join the real world once more.

When it was time for his run in the orange groves, Paddy couldn’t be persuaded to go past the scene of the crime, so we had to make a detour. And two days later, he still won’t go that way. I’m beginning to think his pet passport tells lies. In the space for the animal’s sex, it says ‘Macho.’ Now, my dog is many things, but as the Close Encounter With A Hare Kind proved, he definitely isn’t macho!