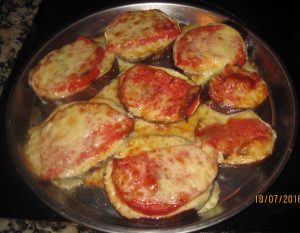 One of the best things about living in Spain is the availability and affordability of lovely fresh fruit and vegetables. A trip down the market will yield a trolley full of fresh, in season fruit and veg for around €10 or less. And it’s as good as organic, because the small producers who sell their produce on the markets don’t use chemical fertilisers and pesticides. What could be better? Only a friend rocking up with home grown aubergines (berenjenas) and beefsteak tomatoes, fresh from the soil.

I’ve used aubergines in casseroles and roasted vegetable mixes, but that’s about it, so I went on a mission to discover new ways to cook them, as I could see I’d get fed up of sauted aubergines before I worked my way through them. One recipe was an aubergine, tomato and cheese bake with breadcrumbs, and while I liked the sound of the flavour combination, I didn’t fancy a stodgy bake in 38 degrees of daytime heat outdoors, so I started to think of ways around it. And I came up with this idea.

I sliced an aubergine into fairly chunky slices – about 1/2″ in old money – then salted them and left them for about half an hour. That draws out the water and stops them going to mush, and also brings out any bitterness. Then I washed off the salt and patted them dry on kitchen paper. I drizzled a little olive oil on a baking tray, and coated the slices with it. Then I put a slice of tomato on each aubergine slice and seasoned it with black pepper. I then topped the tomato with a thin slice of cheddar cheese – you could use any cheese for this, but cheddar is my favourite. I considered grated cheese, but dismissed it as too messy.

I cooked them in my halogen oven at 200 degrees for 15 minutes, until the cheese was nicely browned. I’d give it an extra 5 minutes in a conventional oven. I served up my aubergine slices with a jacket potato, because that’s what I fancied, but it would also go well with pasta, brown rice or potato wedges. And you could vary the toppings by adding onion, peppers or mushrooms. Turn them into finger food for a party by serving them on thin slices of bread or crackers, so they’re easy to pick up.

So, what did they taste like? Only one word – fabulous. The aubergines were cooked through, but still firm, as were the tomatoes, and the cheese added a lovely savoury touch. I’ll definitely be cooking this again. It was filling yet light enough for a summer lunch or supper, with the taste of the Mediterranean. Not too high in calories either, so ideal if you’re watching your weight, and of course those brightly coloured vegetables are sky high in antioxidants. Why not try it for yourself soon?

Update: Since this recipe first appeared, readers and friends have successfully tried it with blue cheese, mozarella and haloumi, so why not ring the changes?

Posted in Food and Drink in Spain