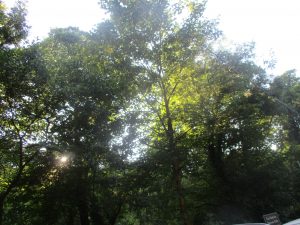 Sun shining through the trees by the River Lynher – the only bright spot of our visit to the Notter Bridge Inn!

It’s been a pretty traumatic week – even on top of the other six traumatic weeks since we left Spain. I won’t bore you with the details, but suffice to say Glenys decided I needed to cheer myself up last night, and she thought a drive out in the country and a meal in a nice friendly pub would do the trick. She also promised me photo opportunities aplenty, so off we went to the Notter Bridge Inn near Landrake, Cornwall.

It seemed to tick all the boxes. Drive in the country? Check, with the added bonus of being only 6 miles from our base. Photo opportunities? Check – the pub nestles on the River Lynher, and I got a couple of beautiful shots of the sunlight through the trees. Friendly pub? Well, in the words of the well-known song, Two Out of Three Ain’t Bad. Except it was – very bad!

When we went into the pub, it seemed friendly enough. A few people said hello, and we asked the landlady if there were any spare tables. She said yes, take our pick,  so I sent Glenys to find a table while I ordered the food and drinks. I asked if I could run a tab, and left my credit card behind the bar. The landlady said the kitchen was busy, so there would be a ‘bit of a wait,’ and I said that was okay, we could enjoy our drinks and I could take some photos outside. When we went through the bar to the conservatory, there was only one other table occupied, and the people eating outside were being served as I got the drinks, so we were confident it wouldn’t be too much of a wait, and the food looked and smelled lovely.

How wrong can you be? After we’d waited for half an hour, the conservatory had filled up, and then starters came out to the tables who had ordered after us. We wondered about that, but thought maybe they were going to bring all the main courses out together. However, when the starters were followed by main courses, while our table was still depressingly bare, I called over the waitress and we asked how long our food would be, since we had ordered before most of the other diners had arrived.

The friendly waitress went to find out, and the lady on the next table asked how long we’d been waiting. By now, it was over 45 minutes, and she said that sometimes they forgot to put the order through to the kitchen! However, she also said the food was worth waiting for, and when the waitress returned and said it would be just another 10 minutes,  and did we want a refund, I said it was fine, we were hungry, and I was happy to wait. I asked why the food had been delayed, and she said she didn’t know, but would ask the landlady.

The landlady marched across to our table and snapped ‘What’s the matter with you?’ Clearly, when she’d done the hospitality training, she’d missed the bit about keeping the customer satisfied. She also said that as we’d just walked in off the street and hadn’t bothered to book, we should expect to wait until the regulars were looked after. She went to the kitchen, then informed us that, ‘The chef says just go, we don’t want your sort in here.’

We were incredulous. We hadn’t been rude to the staff, just politely asked where our food was, and we were still prepared to wait, even though others had been served ahead of us. Graciously, the landlady said we could have our drinks on the house, as she almost threw my debit card across the bar. As we headed for the door, stomachs a-rumble and backs well and truly up, Basil Fawlty* himself blocked our exit.

Obviously, it wasn’t Basil Fawlty – he’s a fictional character, but the guy – whom we assumed to be the landlord – achieved the impossible by making the Torquay hotel owner look like the world’s best Front of House Manager. He said we’d been told it would be at least 40 minutes’ wait when we ordered, and Glenys replied that if we’d been told that, we wouldn’t have ordered food at all, and we’d just been told there was a ‘bit of a wait.’ He told us we were liars, and astutely observed that we’d complained about the food, but not about the free drinks we’d had.

I don’t think he appreciated being told that we couldn’t complain about the food, because we hadn’t had any, and the drinks were not free, they were compensation for poor service. And he wasn’t thrilled when I told him I was a writer, and although I never write negative reviews, I was happy to make an exception in their case.

Rather foolishly, he told me to ‘Write what I like.’ So I just did. Moral of the story: 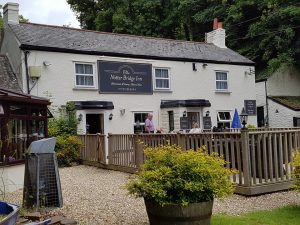 Don’t say it if you don’t mean it. Glenys wasn’t quite sure whether to be scandalised or proud of being thrown out of a pub for the first time in her life. It was a first for me too, but we reckoned that, with a combined age of 141 years between us, being thrown out for being ‘liars and troublemakers’ would do our street cred no damage at all.

Did we get fed? Oh yes! We went to our favourite restaurant, Lanterns in Cornwall Street, Plymouth. The food, service and atmosphere was amazing. Okay, we didn’t get the fabulous photo opportunities, or the scenic drive, but we finally ticked the box for great food and service with a smile. And the bill came in cheaper too. Basil Fawlty, you can learn a lot from Lanterns.

* I’d love to claim the ‘Basil Fawlty’ monicker as my own, but the Mail Online beat me to it. Seems like we’re not the only disatisfied customers at the Notter Bridge Inn after all!

4 Responses to Basil Fawlty is still living and working in Notter Bridge, Cornwall!